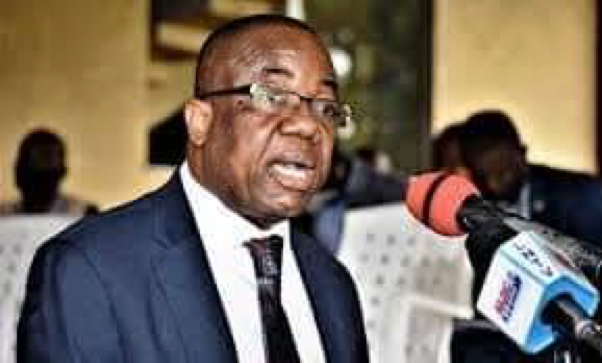 Little more than a month after giving birth in Grand Bassa County, Cllr. Frank Musa Dean Jr. has proposed that a DNA test be done on the kid of the 15-year-old SOS rape survivor.

A 15-year-old adolescent at the SOS village in Grand Bassa County was allegedly raped and impregnated by the formal SOS Country Director Augustine Alieu in December 2021.

Prior to the accusations, the Ministry of Justice deliberately chose not to place Augustine Alieu under arrest or detention in accordance with the “Non-Bailable Crime Pronounced by the President,” which mandates that the alleged offender be under the control of the police until he or she is found innocent.

In the county, a person who is accused of rape is realistically arrested and held until a medical report is provided. Since the beginning of the case, however, a peculiar thing has never occurred with Mr. Augustine Alieu.

The girl was allegedly transported to her 22-year-old sister in Clara town to remain while the inquiry was being conducted after the event was reported to the Ministry of Gender, Children, and Social Protection in December 2021.

However, following the incident, the Ministry of Gender, Children, and Social Protection, under the direction of Deputy Minister Sherman, didn’t denounce the problems; instead, she only addressed them after being accused by Mr. Saye Maye Cole, a member of the executive board of the aforementioned village, on the okay morning Rush on okay FM.

Mr. Saye Maye Cole claims that the Deputy Minister compromised the 15-year-old manor case since she is engaged to the official SOS Country Director.

Without sufficient care, he claimed, the woman was forced to go about a mile to the police station for an inquiry, where she repeatedly ran with Augustine Alieu, the suspected culprit and man who impregnated her.

Saye Maye Cole was alleged to have written, published an article in the New Dawn Newspaper, held numerous press conferences, exchanged emails, and posted on Facebook on Monday, May 5, 2022, accusing Deputy Minister Sherman of compromises while the matter was still under investigation by the Liaison Office. This was according to Deputy Minister Sherman’s complaint to the civil law court.

The Minister scolded Saye Maye Cole in a private interview conducted at her gender office in Congo Town, calling her actions untrue, malicious, careless, and irresponsible, and solely aimed to smear and harm the hard-earned reputation developed throughout the time.

Despite the investigation’s negative conclusion, the kid has given birth, and the Justice Minister has stated that on Tuesday, August 9, 2022, a DNA test will be performed on the newborn and that the results would be compared to those of the suspected offender, Augustine Alieu.

“He does not sleep out”