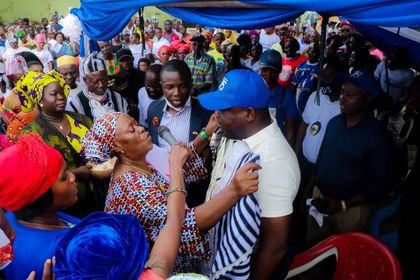 The Movement of Lifters (MOL) and the Friends of President George Manneh Weah have honored, and endorsed District #5 Representative Thomas Fallah’s senatorial bid for the ensuing 8 December special senatorial election.

Speaking Tuesday, November 10, 2020, at the official endorsement ceremony held in Montserrado County District #8, at the Saye Town Sports Pitch in Sinkor, Monrovia, the Secretary General of MOL, Ernest Toe said, they have decided to honor and endorse Rep Fallah as the next senator of the county because of the what they call the “people centered mind” they believe he has shown the people of his district, and even those who are not residing in his district.

The MOL’s Secretary General also indicated that with the numerous development projects Rep Fallah has accomplished in his district and beyond, they have agreed and also pledge their full support to the lawmaker in the upcoming special senatorial election, adding that when elected, Rep Fallah’s ascend ency to the senate would greatly benefit the Montserrado County.

“It is with no doubt that the election of Rep. Thomas Fallah as the next senator for Monsterrado County will be a clear manifestation of prosperity in this county, as he has been during in his district making us so anxious to elect him come December 8, so that the entire county can benefit from his flourishing leadership ability”, SG Toe added.

Delivering a cow and dressed up in an African gown, Madam Musu Thompson, a representative of the Look Up-To-God Group which comprises traditional women said, the women of her group have decided to traditionally honor and endorse Rep. Fallah because he is a true son of the soil.

According to Madam Thompson, the lawmaker should count on them for all the support he solely desires for his victory, adding that their blessing is hugely upon him.

Accepting the honor and endorsement, senatorial aspirant Rep Thomas Fallah lauded MOL and others for pledging to entrust him with their county, adding that they made the best decision for endorsing him as their next senator.

The Montserrado District #5 lawmaker then assured  that whatever trust they have greatly imposed in him will not be trashed, but vowed that he will rather deliver to their expectations in making sure Montserrado receives whatever has been lacking in the past years.

“As you people have greatly believed in me by selecting me as your senator-to-be in the upcoming election, the Monsterrado County that we have all been envisioning is on its way with even greater perspectives,” Rep Fallah promised.

For his part, the Montserrado District #8 lawmaker in the House of Representatives, and the spokesperson of the Coalition for Democratic Change Campaign Team, Moses Acarous Gray appreciated the citizens of his district for what he referred to as being “developmental driven”, assuring residents of Montserrado District #8 that their dreams and aspirations for their county will be met once Rep Fallah is elected their next senator.