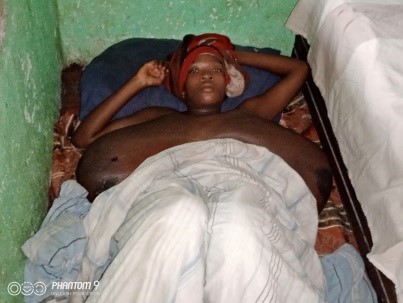 An 18-year-old woman, Annie Boima, who has been struggling with ‘Gigantomachia’, a rare condition characterized by excessive breast growth has successfully given birth to a bouncing baby girl.

However, Annie who has been experiencing severe pains days and nights as a result of the sickness, otherwise known as breast cancer, has appealed for assistance to undergo much-needed medical treatment in Liberia or abroad as it has been recommended by medical doctors.

Annie who is a resident of the 72nd Community in Paynesville, outside Monrovia, gave birth to the girl child, named as Wonder Matthew, on Tuesday, October 6, 2020, at the Emma Clinic in Paynesville. Annie said the birth of the child who, according to medical doctors, weighs 4 pounds and 10 ounces is God’s blessing.

Although the baby is doing well in health, Annie Boima is experiencing excruciating pains and needs urgent and advanced medical treatment at home or abroad.

The woman who cries days and nights said she often feels excruciating pains in her chest and that she lacks taste for food.

She, however, told the Women Voices Liberia that due to economic constraints, her family is unable to facilitate payment for her advanced medical treatment as it has been recommended by doctors.

“I was eight years old when I started experiencing this growth in my breast. Because of this, I was sent to my mother in Bong County by my grandmother because she (Grand Mother) couldn’t afford to treat the illness,” Annie said in tears.

“I experience pains days and nights and only God is my helper, I have been suffering from this sickness about five years now,” she added.

Annie said the closest she has ever come to medical treatment is when a lady (only identified as Love) attempted to help facilitate her medical treatment, but noted that the medical process was aborted due to unspecified reasons by the lady.

Doctors at the John F. Kennedy Memorial Hospital have also informed Annie that the surgery to cure her growing breasts can be done in Liberia, a news she said, has since brought significant relief to her family.

Gigantomachia is a type of Breast Hypertrophy whereby excessive breast tissue is more than 2.5 kg.

The enlargement can cause muscular disorder and over-stretching of the skin envelope, leading in some cases to ulceration.

She has appealed to the Rotary Club of Monrovia, Alpha Fraternity, Liberia National Red Cross Society, Foreign Embassies near Monrovia, President George Weah and First Lady Clar Weah, women groups among others for assistance to get much needed medical treatment.

“Take charge and be intentional and truthful”