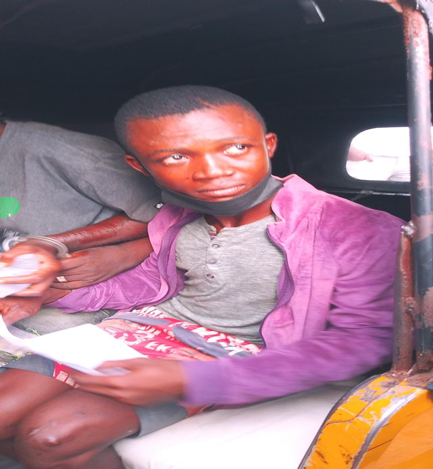 The mother of 19-year-old Shadrack George Weah, who was murdered last year at the Point Four Community, New Kru Town, by defendant Chris Karpeh with an axe strike to the head, has expressed her overwhelming joy and happiness at the Liberian legal system for granting her justice in the murder case.

Following a unanimous guilty judgment for defendant Chris Karpeh for the crime of murder by trial jurors at criminal court A at the Temple of Justice, Madam Christian Kpakeh, the mother of victim Shedrick George Weah, spoke with a judicial reporter after Judge Roselvet Willie gave them justice. Madam Kpakeh, speaking on February 28, 2022, expressed her gratitude to the court for bringing her joy because

According to the indictment, defendant Chris Karpeh knowingly, purposefully, intentionally, maliciously, and criminally struck his nephew Shadrick George Weah with an axe on August 4, 2021 in the new Kru town community, under circumstances demonstrating extreme indifference to the value of human life.

According to the accusation, the criminal act of killing the deceased began on July 29, 2021, when the defendant and the deceased became embroiled in a violent argument that ended in a fist fight.

Before arriving to court for the case, Madam Kpakeh said she had been hearing a lot of negative information, including from the defendants’ relatives, who said nothing would come of the case and that they would make sure their son was safe.

She reflected on the scenario, saying that it all began when Chris Karpeh and his three sisters jumped on her and battered her in the absence of her murdered son. She said Chris, the murderer,  might have kept grudge for her son after the altercation when the deceased went to find out what had happened after being notified upon his return.

She said she initially reported the incident to the police, who then revoked the order to take the matter home when her brother-in-law and others told her they were going to settle the matter at home.

We took the case home after I did as they instructed. Finally, they summoned us both to a conference beneath the tree to examine the situation. Following the case, they asked Chris and his sisters to apologize to me for wrongdoing my family, which they dutifully did. We rejoined, and everything was fine with us again, Madam observed.

She also alleged that her son went to Chris’s house for a child two weeks after the event, and while playing with the child, Chris approached from behind my son with an axe and split him in the head, leaving him lying in a pool of blood.

“My sister came to my house running, calling me to come and see Chris, your son, with an axe behind his head.” When we went there, I saw my son in a heavy pool of blood, unconscious. I never expected that from Chris after we settled everything. Furthermore, Chris has been eating at my house, and I’ve been taking care of him as my own son. This world is evil, but again, thanks to the court, “she added.

“I was really worried with all that I heard about our justice system, but they have all been proven wrong. Therefore, now that justice has been served on me, I can now eat and sleep well. My son was very previous to me, and losing him in this manner is something I would never wish for ever in my life. ” Madam Kpakeh noted.
Meanwhile, trial jurors on Monday, February 28, 2022, brought down a unanimous guilty verdict against defendant Chris Karpeh for the crime of murder at Criminal Court “A” at the Temple of Justice.

The jurors maintain that “is given to bring a verdict, after careful consideration of the evidence adduced at the trial, do hereby unanimously agree that the defendant is hereby guilty of the crime of murder.”

During the call of the case, the prosecution’s first witness, Handful Mulbah, said the diseased was playing with a child named “Theo” in the aforesaid community when the defendant arrived on the scene and took an axe and struck the victim, Weah, from the back of his head.

Following the accident, the defendant fled for three weeks until being apprehended in Grand Gedeh county after police declared him wanted.

The grand jury’s indictment further stated that the defendant’s actions were against the republic of Liberia’s peace and dignity, as well as Title 26, section 14.1 A, B, section 50.51 (1) (a) and section 51.3 (1). According to report, during the trial, defendant Kerpeh confessed to the crime and begged for mercy.