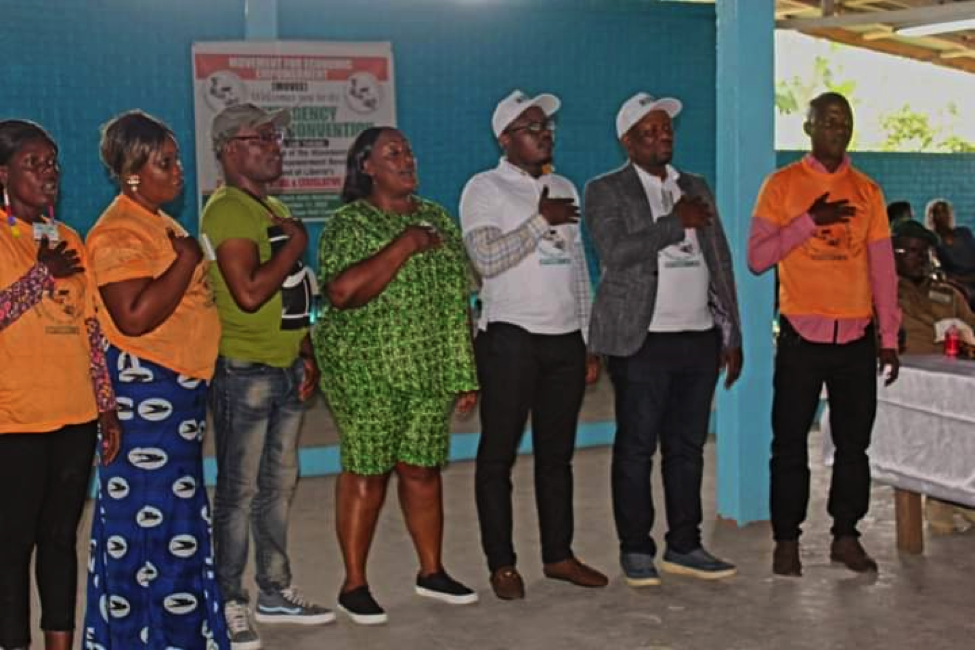 In absentia, the majority of delegates at the convention petitioned, nominated, and unanimously elected their former Chairman, Ambassador Dee-Maxwell Kemayah, Sr., as political leader of the party. Minister Kemayah is currently in the United States of America along with the President of the Republic of Liberia, attending the 77th General Assembly of the United Nations (UNGA). The Secretary General of the party, Jonathan A. Wordsworth, read the statement to the media.

The petitioners, in a nine-count statement, called on Ambassador Kemayah to save the party from total collapse. The petitioners, who organized themselves under the banner “Concerned Members of MOVEE” (CMM), said they were seeking the common interest, growth, and active participation of the party in political activities in the country. “Whereas, we are due paying members and officials of the Movement for Economic Empowerment (MOVEE), with voting rights at the first emergency convention scheduled for September 17, 2022, in the City of Monrovia, County of Montserrado, to decide who becomes Political Leader, National Chairman, and fill in other vacant positions in the party,” the state reads in part.

The statement saidsince party action that compelled the resignation of the first standard-bearer and subsequent sabbaticals of key partisans, the party administrative and operational structures are barely functional due to the inability of the current National Chairman, Dan Saryee, to rally the necessary support to resuscitate MOVEE from collapse, emphasizing that various county structures are barely functional as a result of the national leadership gap, and this has resulted in lots of their partisans seeking political alternatives.

“That it has come to our attention that MOVEE lacks the financial capacity to pay the current National Headquarters’ rental fees for the last two years and faces eviction if nothing is done to correct the situation,” the statement said.

The petitioners said MOVEE statutory bank balance (US$10,000.00) at the Afriland Bank has been reduced to the bare minimum, which is an existential threat in keeping with the new regulations of the National Elections Commission (NEC) of Liberia. The group stated the then National Chairman ( Dan Saryee) has been outside of the bailiwick of Liberia for more than 9 months, in violation of the by-laws and constitution, which brings into question his legitimacy by his absence from Liberia and results in a leadership gap;

Given the foregoing, we are compelled by our desire to see our beloved party responsibly reclaim its place in Liberia’s political corridors through constructive engagement and alignment with institutions of shared political philosophy (empowering the Liberian people to empower themselves).

The petitioners are convinced that their senior Partisan, Dee-Maxwell Saah Kemayah, Sr., has the required technical knowhow, ingenuity, tenacity, and vigor to drive the much-needed renaissance of the Orange Revolution in the capacity of Political Leader.

“Therefore, we the CONCERNED MEMBERS OF MOVEE, who have voting rights and make up the majority of the delegates to the Emergency Convention, do hereby petition to contest and nominate Senior Partisan H.E. Dee-Maxwell Saah Kemayah, Sr. for the position of “Political Leader” at the 17th of September, 2022 Emergency National Convention in Monrovia,” the statement says.

Meanwhile, the newly elected chairman, Hon. Robert M. Sammie, has expressed gratitude to the partisans of MOVEE and asked them to unite for the general good of society.

Read His Statement in Full

A statement of Gratitude:

I would like to share a testimony that could, perhaps, inspire someone. When God asks us to wait, it can feel like he is denying us, which is a frustrating and terrible experience for us as humans. But let me say this to the people who are reading this post: no one who manipulates destiny can alter the plan that God has for you. If you continue to put your trust in God in whatever you do, then these things are just a normal part of your making process.

My membership in the Great Movement for Economic Empowerment (MOVEE), the political party that I cherished for many years, was unfortunately terminated for approximately 800 days. The founding of MOVEE started from the days of the Ground Coalition of Liberian Organizations (GROUNDCOLIO) in 2014, when we put in a lot of hard work to establish this political party. A political party for which I once worked as both the Vice Chairman for Communication and Media Relations and the National Secretary General. It was a heartbreaking experience to walk away in such a way, but ultimately, I believe that it was only a waiting period in accordance with the plan that God had created. My patience was finally rewarded yesterday after more than 730 days of waiting, when God made the decision to reverse the course of events.

Yesterday, September 17, 2022, after a long wait, I was elected and inducted National Chairman of the great Movement for Economic Empowerment, a party that I hold so dear to my heart. My election was unprecedented, and it set a precedent that will never be broken.

If you are going through anything difficult and you are beginning to lose hope, keep your heart and your confidence in God. Simply raise your eyes to the heavens and pray, “God, I am waiting for the time that you have ordained.” God, I am grateful!

Because I am unable to recall the names of all of the individuals who contributed to the accomplishments of the day, I do not want to take the chance of announcing their contributions. However, on behalf of my family and all those who were elected yesterday, especially our Political Leader, Amb. Dee-Maxwell Kemayah Sr., and in my own name, I would like to extend sincere thanks and appreciation to our cherished partisans. These include national and county leaders who came from across Liberia, as well as anyone else who graced the occasion. I am grateful to each and every one of you. I would like to express my gratitude for the services provided by senior partisans Goodrich Cheayan and Jonathan Wordsworth. You are both outstanding examples of statesmen in this day and age. Respectfully, to our esteemed National Treasurer, Mr. Saye J. Biyie: you can be relied upon. I really appreciate your help. Congratulations are in order for the Chairman of the Convention Committee, Junior Comrade K. Edward Norman, Jr., as well as the rest of the committee on the successful completion of their work. I would also like to use this opportunity to extend my sincere gratitude to the county chairpersons as well as each and every delegate for the passion and dedication they have shown toward national service. Your just reward shall descend from the Heavens. To the caterers, led by the Chairperson of the National Women League, Madam Angeline Gborie, I would like to say that no one could have done a greater job than you. I really appreciate your help. We are thankful for the support you have provided and trust that the Lord will continue to watch over you. I also wish for a travelling mercy to our partisans who are making their way back home. And to Mr. Dan Saryee, you played your part. I pray that the Lord would continue to bless you in all that you do in the future.

A Jest of My Political Perspective

As I mentioned yesterday, MOVEE is a political party that is in opposition and will continue to be in opposition while we wait for the time that God has appointed for us to take over leadership of the country. However, we will not be a bitter opposition to any government that is in power while we wait. A bitter opposition has almost always been successful in bringing down regimes or ensuring their failure. Bitter opponents will enter into political marriages and arrangements without first determining whether or not their political philosophies and ideologies are compatible so long as it appears as a convenient means to bring down a government. They will do this despite the fact that the people suffer when a government fails to deliver on its fiduciary responsibilities and services. Therefore, no political party should derive any satisfaction from bringing misery to the general populace in their pursuit of power. The fact that the people are suffering runs counter to the political and social philosophy that our party subscribes to. MOVEE has the goal of helping people overcome the effects of poverty in their lives so that they can live happily. We hope that the Liberian people would be successful in growing their nation. Because of this, we will not lend our support to any kind of bitter opposition.

MOVEE will construct a strong network with other political groupings that have ideological commonalities for the purpose of fostering the growth and development of the people. We shall only uphold or join an obligation if it is in alignment with the social and political ideology that guides our actions.

The judgments that we make moving forward won’t be overly focused on the past, but the lessons that we’ve learned from it will absolutely serve as a useful guide. I have discovered the hard way that the strength of my convictions is not what matters in a democracy; what matters is the will of the majority. As we confidently move forward into the future, we shall always look to the will of the people as our compass.