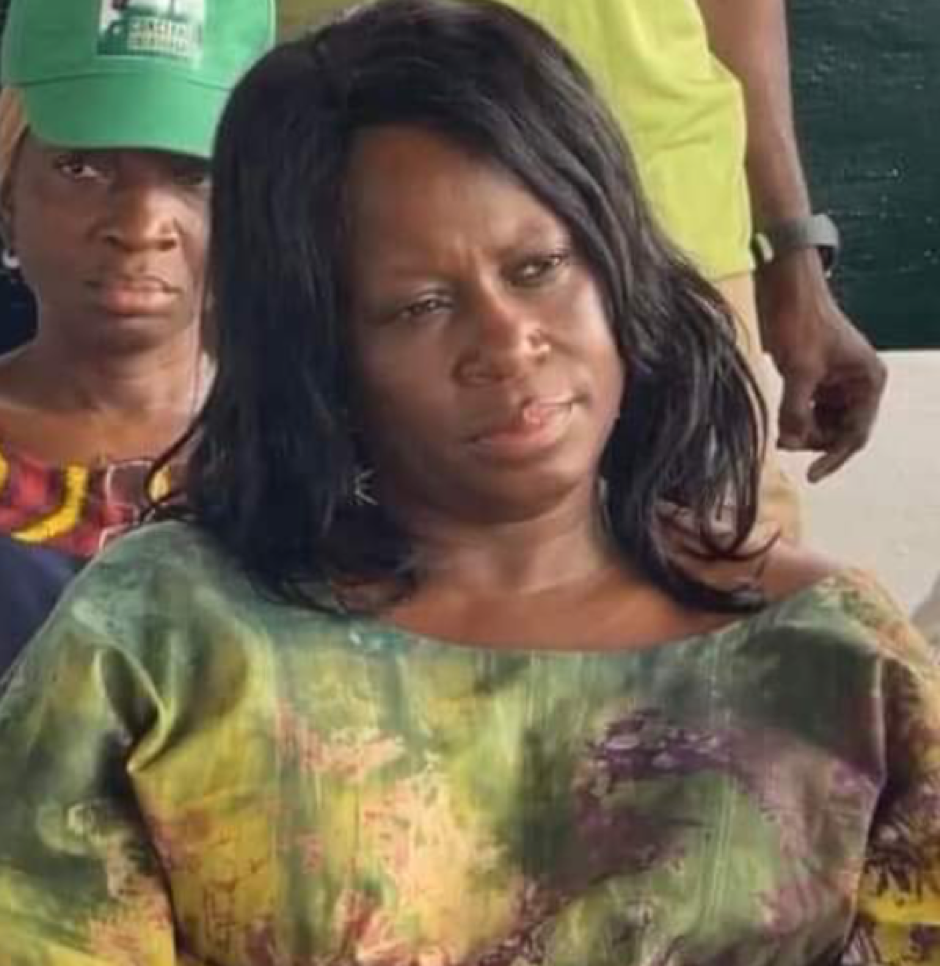 Grand Bassa County Senator Nyonblee Kangar Lawrence has expressed disappointment over what she calls a misinterpretation of her involvement in a case concerning a man who went missing and was later found dead in Grand Bassa County.

Joseph Blama and his wife had gone to Mrs. Martha Doe, a prayer woman, to seek fortune for Mr. Blama, who they said was jobless for the last 7 years.

The senator said it is unfortunate and disappointing that Mrs. Blama has misrepresented her involvement as biased when she worked in close consultation with her to ensure that the body was found and the people of interest or suspects were investigated. The Senator said the misinterpretation came after Madam Blama had asked Representative Enders of her district in Montserrado County to call her and express gratitude for the role and concern she had shown to Madam Blama and the family, but wondered why the story changed.

It is unfortunate and disappointing that Mrs. Blama has misrepresented my involvement as biased when she worked in close consultation with me to ensure that the body was found and the people of interest or suspects were investigated. This is after she also asked Representative Enders from her district to call me and express gratitude for my role and the concern I had shown for her and the family. When and why did the story change? ” Senator Kangaroo Lawrence is perplexed.

The Senator got involved when the delay by the police to take the necessary actions led to a riot in the community where the man had gone missing and people on the crime scene and the entire community were being threatened, according to the Senator.

Upon hearing all this, I immediately called the police station to inquire and was briefed similarly. I was also informed that Mrs. Martha Doe and the prayer team had been in jail for four days without a formal charge, “Senator Lawrence explained.

The Senator said she was concerned that a human being had gone missing and a group of people, mainly women, were in jail for four days without being charged and sent to court. She said she was also concerned that there was a riot that scared and threatened citizens in the area because the family was understandably hurt and frustrated and was demanding speedy action.

Based on the surrounding circumstances, the female politician said she contacted the Justice Minister and asked if he was aware of this situation. The Justice Minister informed her that he would follow up and get back to her, she said.

A few minutes later, the Minister of Justice called back as promised and confirmed exactly what the police commander had said. He and I agreed that it was illegal to keep people in jail for more than 48 hours without a formal charge. Accordingly, he was ordering their release and needed an eminent citizen of the county to go to the police station to meet with the county attorney for the details of his actions and sign for the release of the people, with the responsibility of ensuring that they report when needed. I agreed to play that role and did so accordingly, “Senator Lawrence indicated.

Moreover, the Grand Bassa County Senator reached out to the wife of the missing man, introduced herself, and informed her about the decision and expressed her willingness to work with her to ensure that the search intensified and others who were on the scene got arrested. She was excited about my involvement and said, “Honorable, please help me. The police are slow and there’s a need to also arrest the city major who was on the scene.”

The next day, I joined Blama’s wife at the police station around 6pm, at which time the church people had been there from the morning hours, as it was agreed to have them there everyday. Mrs. Blama and I expressed our concerns about the process and needed to know the next step. I also expressed my disappointment to the police for the misinformation that the City Mayor was not arrested because he couldn’t be found. The Mayor was at the county meeting that I had just attended the same day in the presence of the police. In fact, I informed the minister in a text that the mayor was not on the run and that he was in my presence at the county sitting and should get arrested for questioning as well.

We were informed that it is illegal to charge anyone with a missing person unless the body of the person is found, and the reason for keeping the people in jail was to protect them against threats and attempted attacks on their lives. We left the station. Mrs. Blama stopped by my house in Bassa and I reassured her of my commitment to keep in touch with the Justice Minister and push for a more aggressive and bigger search team, which I did.

The prayer lady and her team were informed through my county coordinator to report when requested by the police for an investigation because the body had been found.

I’m told the investigation is ongoing and the prayer lady and her team are present and represented by public defense lawyers.

I have tried reaching out to her since her interview and she has refused to answer.

I know what it means for a woman to lose her husband, especially given the circumstances under which it happened. I have walked that path and do sincerely empathize with Mrs. Blama. I can understand the anguish. It takes me down memory lane. I love her and hold nothing against her. As a public official and leader of the county, I see it as my duty to provide this clarification to the public, given how everything is politicized here. I shall still reach out to Mrs. Blama and give my moral and emotional support through this difficult period. Again, I understand her anguish and hold absolutely nothing against her.

The story of a missing man in Grand Bassa County:

A few weeks ago, I was informed by the county coordinator for my office that there was a case of a missing man in St. John City, Grand Bassa County.

The missing man was a visitor attending a prayer meeting conducted by Mrs. Martha Doe, one of the citizens of Grand Bassa County and a well-known prayer warrior.

Additionally, we talked almost every day, and while the police search was ongoing, we talked about reaching out to traditional leaders and elders in the area to help with the search by encouraging the villagers to get involved and report anything related to the situation. From this conversation, I recommended Mr. Matthew Joe, who is a resident of that district and has a good reputation for dealing with our traditional leaders and elders. Mr. Joe is not the representative of the Buchanan district, as Mrs. Blama claimed. They simply have the same name. Mrs. Blama and Mr. Joe got in touch and started a conversation about a plan. Later, Mr. Joe reported to me that he was advised to let the government continue the search without interference as there could be human rights issues arising from the approach of the traditional leaders. I told him to inform Mrs. Blama that if there had to be traditional activities that would violate human rights laws, then it was not advisable and that he should inform the locals to report anything that was seen relating to this case, which he did. I also called Mrs. Blama and informed her.

Few days later the dead body of Mr. Blama was found and the police and Minister of Justice informed me immediately and also told me that Mrs. Blama and the family was on the scene when the body was found. I called Mrs. Blama few hours later knowing that it actually was a hard situation and she would have needed some attention. We had an emotional conversation and I promised to stay in touch and ensure that the police started the arrest and investigation since the dead body was now found.