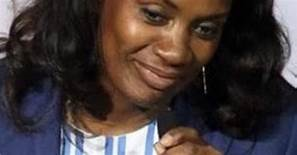 as she donates food, cash to rural dwellers

The government-run Liberia News Agency (LINA) reports that the convoy of President Weah’s wife was led by the Chairman of Liberia’s Superintendent Council and Head of Grand Bassa Local County Administration, Janjay Baikpeh while driving towards a community behind the concession area of Arcelor Mittal Liberia; “Bacconnie”.

Several residents, majority of them women, were seen and heard chanting locally “oh Mama- We like you oh Ma”; as the First Lady disembarked her vehicle and began greeting them and speaking of the strength of women in every part of the society; thus reminding them about the significance of “International Women’s Day”.

The occasion, held two days to the March 8 observance itself, benefited the women with 50 bags of 25kg rice, a set of sports jersey, undisclosed pieces of Lappas along with other food and assorted items; a value of which Madam Weah decided not to attach cost to; when asked.

“My mission is to improve women’s lives for a better Liberia as enshrined in the motto of “SHE’s YOU MOVEMENT”; she said.

Additionally, the First Lady presented cash of US$1,500 to the women through their Town Chief as part of the celebration; a moment that turned the Bacconnie environment into a scene of overwhelming merriment.

Bacconnie is about 10 kilometers away from Buchanan City, but it is an attractive tourism site and an environment that needs developmental attention, including quality medical and educational facilities, empowerment of women and youths through skill training and grant (Cash) for business activities as well as provision of jobs for men.

This part of the county depends on only one junior high school and a clinic that have been faced with numerous challenges since Madam Ellen Johnson Sirleaf’ first term.

Amazingly, the orderly lineup of the coconut trees and the roaring of the Atlantic Ocean towards the pristine beach sand would not easily allow any individual to vacate the community in a snappy manner; especially when the calm mood of the former, but famous, “Sunset Beach” serve as a flashback of a story of nature.

The message of First Lady Clar Weah was interpreted to the citizens by Supt. Baikpeh in the Bassa language; a performance that accorded the nation’s Mother a cheerful applause from the recipients of the many items and cash at one of the beaches that provided relaxation for all visitors.

As ingredients to the commemoration, food and drinks were served as traditional songs amused the citizens and Madam Weah along with her delegation.

Importantly, the jubilation regarding the gifts did not throw the prioritization of the Bacconnie road construction into the admirable sea when the Chairlady of the community, Annie Nimely registered the community’s gratitude for Madam Weah’s visit.

The 47 year-old energetic Chairlady in the local language explained that “we are overly happy to receive the President’s wife along with the good things brought to us and also for choosing our Town for this big Day; but our Ma and Superintendent Baikpeh; the construction of our road is seriously our heart desire,” Mother Nimely said.

Immediately, the Town Chief and other nearby town members increased the handclaps for the Chairlady when she primarily pointed out their major and long outstanding constraint is access road in that part of Liberia.

It is believed that the construction of the road would attract more NGOs, humanitarians and investment to an environment that host approximately 2,500 inhabitants whose primary source of survival is fishing as well as trading coconut besides a bit of subsistence farming.

Prior to the turning over of the materials and cash, the Vision Bearer of SHE’S YOU MOVEMENT and the “Clar Marie Weah Foundation” also toured the 30-bedroom facility for the Old Folks and People Living with Disabilities; a project that would be dedicated upon the President’s visit to Grand Bassa County soon.

Separately, the First Lady also engaged and appreciated a group of young ladies in Buchanan who are spearheading the “Girls of Clar Weah” in the county; a mission Madam Weah admonished to keep up not only to please her (Clar), but help transform other young ladies through educational and empowerment programs that she is willing to support. Meanwhile, investing in the tourism sector was a key statement made by President Weah’s wife at the weekend interaction; assuring the citizens of taking His Excellency there for a day’s visit in regards to their concerns for road construction and other challenges.