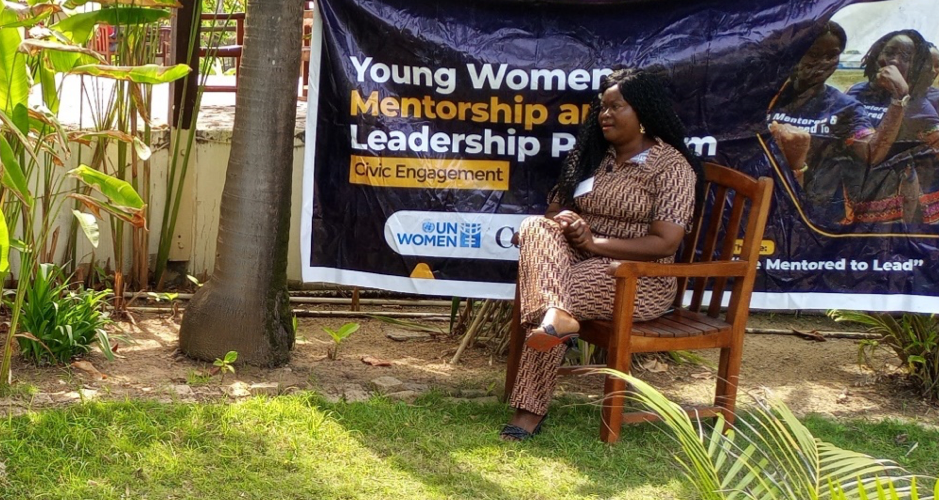 Musu M. Kamara, dubbed “Pro-Poor Queen” for her unwavering support for the Congress for Democratic Change, is a Gbarpolu County native. People here are generally governed by customs and religions, the most prevalent of which is Islam. In a representative democracy like Liberia, residents must frequently strike a balance between what religion or tradition dictates and what the law needs or what is expedient.

Musu is from a traditional Muslim family, and being a woman makes it much more difficult for her to fulfill her political goals. Today, however, the situation in Musu’s neighborhood is different. Her parents, too, are proud of her, possibly because their daughter dares to be different and to defy gender roles and standards. Musu can now eloquently articulate herself and publicly discuss politics as a result of recent training, mentoring, and exposure.

My parents are quite pleased with me. People in our area are now questioning, “Whose child is this?” for the first time. That pride belongs to my parents, and UN Women deserves recognition “Musu Kamara expresses his thoughts. “

Musu was one of 75 young women taught by NAYMOTE in 2019 as part of the Young Women’s Mentoring Initiative, a UN Women-funded programme called Women’s Political Empowerment and Leadership (WPEL). The WPEL was supported for four years by the Canadian government, however it has already come to an end.

Musu says she lacked the confidence to publicly express herself before joining this mentoring program. Even within her own CDC, she would not dare to run for any position. “Prior to the training, some of us couldn’t stand to express ourselves; however, things have changed now.”

Musu is the current Gbarpolu County Chairperson of the CDC. She flew from Gbarpolu to Monrovia in 2020 to assist CDC Monsterrado senatorial candidate Paulita CC Wei’s candidacy. Paulita’s mobilization effort in Montserrado County’s 17 electoral districts was led by her. Musu believes that getting involved in politics has given her a new reason to life, despite the fact that her candidate lost.

We had Paulita’s personal crew and the campaign team for the party. I was the campaign manager for the party. Despite the fact that I come from Gbarpolu County, the mentorship I received from the women’s political participation training prepared me to lead the team through the 17 districts of Montserrado County.”

NAYMOTE’s mentorship initiative was designed with the goal of developing young women’s capacities to the point where they could share their expertise with others. And the best thing for Musu is that she will be able to return home and help other young ladies realize that with the appropriate exposure and mindset, they can achieve their goals. She gathered at least 75 people to learn about women’s political engagement and leadership from her.

“I did not restrict the instruction to solely mentees. People who are interested in politics or leadership were invited. The chairwomen of Gbapolu’s three administrative districts, as well as the chairwomen of the four major political parties and women running for office, were all invited. I can affirm that at least seven women indicated interest in the event shortly after the training because they were inspired by what they learnt.

“My participation in the women’s mentorship initiative has resulted in all of this. As a result of this program, I am now able to lead.

That is the focus of NAYMOTE’s Young Women’s Political Leadership and Mentoring program. 75 young women from Liberia’s fifteen counties were trained in campaign strategy, political campaign management, and how to run for office over the course of a year. Mentors were appointed to them. Mentors were those who were already in positions of leadership. NAYMOTE paired these young ladies with mentors who were members of their political parties to ensure that everything went properly.

NAYMOTE will have taught 275 young women in political engagement and leadership by the end of the project.

Laura Targbe Korvah is a dream come true since the program has boosted knowledge and desire to participate in active politics, not just as voters but as party leaders and candidates. Laura is the president of Liberia’s Young Women’s National Political Council, a legal entity established by the Young Women’s Political Mentorship and Leadership Program to mentor and support young women interested in entering politics.

The concept of forming a council was not an expected conclusion, but it has provided the WEPL with a pleasant unintended consequence.

“We have observed a substantial improvement in our members since our inception. Because of this leadership training, many young women have risen to positions of leadership in their varied settings, such as schools and workplaces.

“Young women who have never been interested in politics are suddenly striving to run for representative positions in their districts.” I used to enjoy politics, but not quite as much as I do now. It was because of this program that I began to consider running for office in my area and was given opportunities. In my district, I never saw the possibilities. For young women, though, this instruction is a bit of a wake-up call. “We commend NAYMOTE, UN Women, and the Canadian Government for this initiative,” Laura says, “and we’ve seen the spark in young women to enter and stay in politics.”

Laura isn’t the only one who wants to run for office in her area in the future. Musu is thinking about doing something similar in Gbarpolu, but not right now. For the time being, she wants to concentrate on honing her new leadership skills in order to help other women.

Saykwayee Henry, like Musu and Laura, makes no apologies for her improved self-assurance as a young lady. Her self-esteem was low prior to entering the Young Women’s Mentoring program. But that is no longer the case. Saykwayee, a well-known child advocate, is gearing up for her political run for the representative seat in Margibi County’s District #2. “I wouldn’t have had the courage to run for public office if it hadn’t been for my involvement in the mentoring program.” I was able to discover a common ground between activism and politics as a result of the training, and I’m taking advantage of it.”

Gweneh Y. Howard, who hails from Liberia’s farthest county, Maryland, says that more women, including herself, are becoming engaged in politics. I was so impressed by the training that I stated my decision to run for office in 2029 and serve as a role model for other women.

“This is the first time a woman has run for an elected office in a school district.” I was the first, and I was victorious. We’ve learned from the mentoring program that as long as you’re capable and have the desire, you can go for it and be successful. This is something that the mentorship has done for us: it has opened these women’s minds.

“More women entering politics and holding public roles is important because when men and women make decisions together, the decision is more valuable.”

Leadership isn’t just about national political leadership, according to NAYMOTE and UN Women. Women may lead at any level, and Linda Playma Lloyd of Grand Bassa County is interested in this aspect. She ran for the Mano River Union Youth Parliament against two men and won, becoming a senior parliamentarian as a result of the courage she gained from the mentoring. “That happened because the mentorship program gave me courage.”

Linda is proud of her mentees’ leadership of the Bassa Youth Caucus, which brings together all of Grand Bassa County’s youth groups. She’s a mentee as well. We were able to have an impact because of the various forms of awareness-raising we implemented at all levels.

“When a woman is subjected to rape or sexual gender-based violence, she recognizes it. She knows what it’s like for a woman to go through it because she’s been there herself. As a result, she works with others to pass legislation that effectively addresses these challenges.

Mentoring is more personal for Ruth H. Boima. Ruth, like many of her classmates in the program, has difficulty speaking in public. This training has been quite beneficial to me. It took a lot of courage for me to speak up. I was one of those who believed that only men could hold positions of leadership since they had traditionally dominated us. But, moving on, I am willing to compete for any job, whether it be at school, in the community, or anywhere else. I am capable of representing my people.” Ruth also believes that women will no longer be considered backbenchers in the future. I’m confident that many women will occupy the positions that we are meant to fill in the next five years or so. At the table where decisions are made, our voices will be heard. Only women have a greater understanding of the challenges that women experience.”

Margibi County is home to Rosetta Fandollo. Rosetta, who is now a mentor, believes that the WEPL initiative has imposed a responsibility on all willing participants. “Learning isn’t something you can just pick up and do at home. It’s not always about the money; it’s about you going to this young woman and sharing what you’ve learnt with her. You may even organize a community meeting with your peers to share what you’ve learnt. They will go out and teach others based on what you have taught them. UN Women has contributed to the cause. It is now our obligation to collaborate with our peers; after all, that is what education is all about: learning to educate others while also assisting others.”

Given the numerous challenges that women face in Liberia’s political leadership, there is no doubt that much more work remains to be done. However, as the saying goes, a thousand miles begin with a single step, and developing young women as leaders is one of the first steps toward realizing the objective of equal representation. In Liberia, women make up fewer than 11% of the legislature. The increased number of young women who want to pursue careers in politics and leadership is a tremendous boost to the fight for women’s empowerment and political authority.

“I hope you will use this ‘Keke’ to change your life”