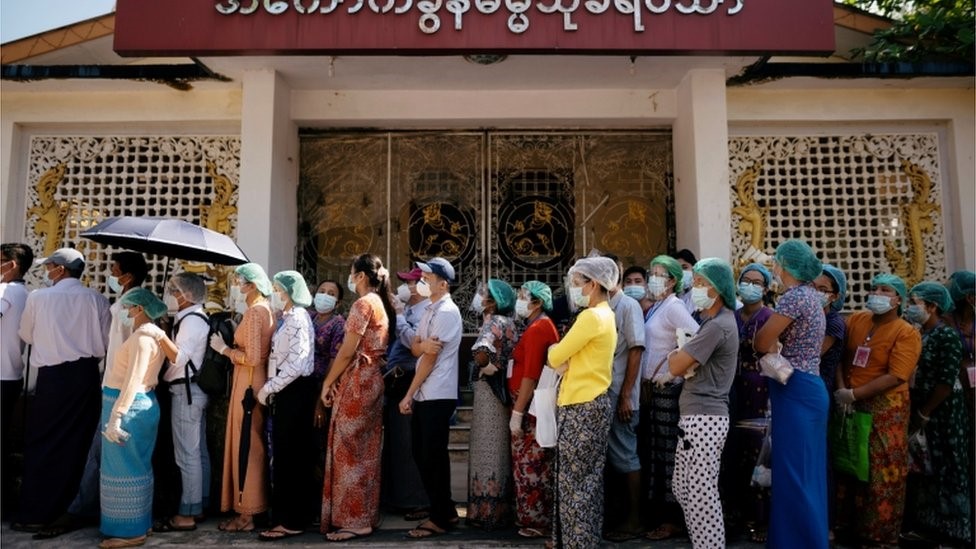 It comes five years after Aung San Suu Kyi won a landslide victory and entered into a power-sharing agreement with generals who still hold huge power.

Ms Suu Kyi remains hugely popular in Myanmar and is expected to win.

But the Nobel Peace Prize winner and global icon has dramatically fallen from grace internationally for her response to the Rohingya crisis.

Hundreds of thousands of Muslim Rohingyas fled an army crackdown in 2017 in what the UN described as ethnic cleansing. The army in Myanmar said it was targeting militants.

Observers have questioned the credibility of the election because of the disenfranchisement of virtually all Rohingya. Voting was cancelled in large parts of conflict-hit states including Rakhine, Shan and Kachin – home to many ethnic minorities – as officials cited security concerns.

Ms Suu Kyi, 75, cast her ballot last week when the country held advance voting for the elderly in a bid to protect them against the coronavirus.

The main challenger to her National League for Democracy (NLD) party is the military-backed Union Solidarity and Development Party, which along with 23 other opposition parties had called for the vote to be postponed because of a surge in Covid-19 cases.

But in an October broadcast Ms Suu Kyi said the election was “more important than Covid”. She has urged people to vote as she tries to defend her party’s absolute majority.

Why can’t the Rohingya vote?

Myanmar’s minority Rohingya population was stripped of voting rights ahead of the 2015 general election after the temporary documents many held were invalidated.

More than 740,000 have fled to neighbouring Bangladesh since the 2017 army crackdown, but several hundred thousand still live in western Rakhine state.

media captionThe Malaysian government has turned away Rohingya refugees, over fears about coronavirus

In September the UN human rights investigator to Myanmar said the election would fail to be free and fair because of the disenfranchisement of the mostly Muslim minority.

The Rohingya, who trace back their ancestry in Rakhine for centuries, are described as one of the world’s most persecuted minorities.

But the government of Buddhist-majority Myanmar does not recognise the word Rohingya, denies the minority citizenship and derides them as “illegal immigrants” from Bangladesh.

In January the UN’s top court ordered the country to take measures to protect the Rohingya from genocide.

Ms Suu Kyi has rejected the genocide accusations while saying that war crimes may have been committed.

Earlier this year six of at least a dozen Rohingya who applied to run as candidates in the election were barred from standing.

How does the election work?

Polling stations opened on Sunday with extra measures in place to prevent virus transmission – such as temperature checks and the provision of hand sanitisers.

Elections are under way for the upper and lower houses of the national, state and regional governments.

A total of 1,171 seats are being contested, said the US-based Carter Center, under the first-past-the-post system.

Voters can choose from more than 6,900 candidates from 92 political parties and independent campaigns, it added.

But a quarter of parliamentary seats are reserved for the military under a controversial 2008 constitution drawn during junta rule.

Who else can’t cast a ballot?

In October, Myanmar’s election commission cancelled voting in large parts of Rakhine state – where fighting between the military and the Arakan Army, comprised mainly of the Buddhist Rakhine ethnic group, has killed dozens and displaced tens of thousands.

It also cancelled the election in parts of other conflict-hit states including Shan and Kachin, saying that some areas were “not in a position to hold a free and fair election”.

The mass cancellations have outraged ethnic minority parties and means a total of nearly two million people are disenfranchised in a nation with some 37 million registered voters.