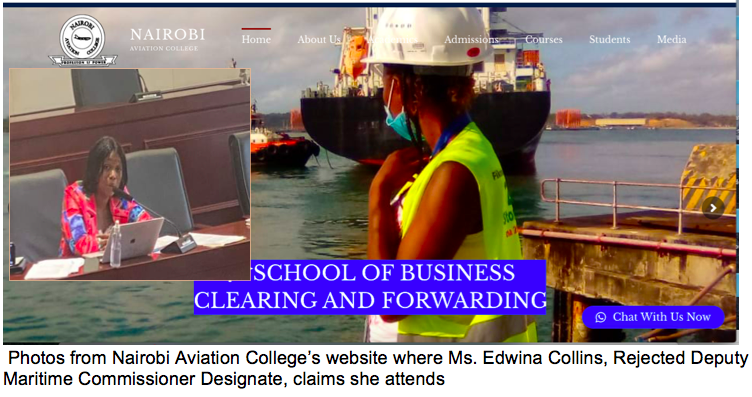 According to the findings of an inquiry conducted by Womenvoices Newspaper, Nairobi Aviation College is a legitimate educational institution that has been granted a license by Kenya’s Technical and Vocational Education and Training Authority.

In Kenya, the college in four locations offers Maritime Management Diplomas through its School of Clearing and Forwarding, despite early reports that the school was a fraud. The Technical and Vocational Education and Training Authority has assigned the registration #: TVETA/PRIVATE/TVC/0120/2018 to one of the branches that Ms. Collins attends as a licensed Technical and Vocational College in Kenya. In alphabetical order on a spread sheet listing accredited technical colleges, the Nairobi Aviation College is N0. 1443, followed by its other three branches. https://www.tveta.go.ke/institutions/

Nairobi Aviation College operates 11 schools, one of which is the School of Clearing and Forwarding, which offers a 12-month diploma course in Maritime Management.

The goal of the Maritime Management course, according to the school, is to provide prospective Maritime Management learners with a body of knowledge that will increase and broaden their employment opportunities within the maritime industry globally; provide them with a clear understanding of all economic, legal, technical, and managerial parameters that apply in the shipping industry; and enable them to integrate their knowledge gained on the course in analyzing and proposing solutions to problems.

The Liberian senate’s decision to reject President Weah’s nominee, Ms. Edwina Collins, for the position of deputy commissioner for vessel registration and safety at the Liberia Maritime Authority, based on public disinformation, prompted the newspaper’s investigation.

Many activists on social media misinformed the audience by using outdated statistics. They gave the idea that the Nairobi Aviation College, which Ms. Edwina Collins claims to attend, is a fake that is functioning illegally in Kenya. Nairobi Aviation College is not recognized by Kenya’s Commission of University Education, according to them.

On the other side, Womenvoices has discovered that the Commission of University Education lacks the authority to certify technical colleges such as Nairobi Aviation College. Technical colleges in Kenya are accredited by the Technical and Vocational Education and Training Authority.

The false impression appears to have fueled negative public sentiment against the nominee, leading many Liberians, including members of the Liberian Senate, to believe that Ms. Collins was lying and lacked the educational qualifications she claimed, resulting in her rejection by the Liberian Senate plenary.

As a result, certain members of the Senate Standing Committee on Autonomous Agencies and Public Enterprises were eager to verify whether Ms. Collins was studying Maritime Management at Nairobi Aviation College as she indicated on her resume during the hearing. Sen. Jonathan Sogbie of River Gee County is seen in a video clip circulating on social media questioning the nominee about her claim to have studied Maritime Management at the Nairobi Aviation College.

“Your CV indicates that you are a student at Nairobi Aviation College’s Maritime Management component. Is that correct?” Unfortunately, I’m on the Nairobi Aviation College’s website. Except for the fact that I am on a different page, there is no mention of maritime management, so if you could give me your website address to check that, I would appreciate it. “Trust me,” he said.

Madam Collins responded that she is a Maritime Management student at Nairobi Aviation College and that she would send the Senator the website address via email.

Ms. Edwina Collins joined Nairobi Aviation College in May 2021 and has only one external examination left to complete her studies at the college, according to our findings. She is now a prospective graduate pursuing a master’s degree in Gender and Development Studies at Nairobi’s Kenyatta University. She has a Bachelor’s degree in Economics from the University of Liberia and a number of post-graduate certificates, including a certificate in sexual and gender-based violence among women and girls; youth empowerment; a certificate in network engineering from Blue Crest University College; a certificate in computer database management; and advanced word processing, a skill that she said could be very useful in creating, coordinating, and managing the shipping region.

Senator Jonathan L. Kaipay, the committee’s chairman, received a letter from Ms. Edwina informing him that she was supplying information in response to senators’ concerns about the Nairobi Aviation College’s website address during the hearing.

Sen. Jonathan Kaipay of Grand Bassa County, Chairman of the Committee of Maritime

“Mr. Chairman, one of your colleagues requested the official website of the Nairobi Aviation College about the authenticity of the institution’s provision of courses in Maritime Studies during my confirmation hearing,” the letter said in part. For the record, I am glad to provide the following information in response to the distinguished Senator’s question.”

Ms. Collins provided the senate with a website URL as well as an email address to which they could send any questions regarding the college.

I offer my warmest congratulations and heartfelt gratitude to the whole Senate Standing Committee on Autonomous Commissions for the memorable interaction that occurred during my confirmation hearing.

Mr. Chairman, during my confirmation hearing, one of your colleagues inquired about the authenticity of the Nairobi Aviation College’s Maritime Studies courses on the institution’s official website. For the record, I am glad to provide the following information in response to the distinguished Senator’s question:

The institution’s website is www.nac.ke, and it can be contacted via email at info@nac.co.ke.

In addition, Mr. Chairman, my academic records and other essential documents are attached to this communication.

Thank you for your kind consideration.

However, it is unclear whether the committee attempted to verify the college’s validity. Despite her eagerness to serve her country, the Senate Standing Committee on Maritime recommended to the Liberian Senate’s Plenary on Thursday, June 9, 2022, that Madam Edwina Collins’ nomination as Deputy Maritime Commissioner Designate be rejected on the grounds that she lacked the qualifications and experience for the position.

Observers who talked with this paper described the move as a “deadly blow” to efforts to bridge the gender gap in government through increasing women’s participation. According to the advocates, using a female nominee to create a public example for political goals is inappropriate.

According to some observers, senators seeking reelection in 2023 want to appeal to public sentiment. That’s why they went hard on a female candidate in order to garner sympathy from the people. They emphasized that Madam Edwina Collins is a direct victim of political maneuvering. Many nominees have been confirmed by the Senate in the past who lacked Edwina Collins’ qualifications.

President pro tempore and chairman of the Senate committee on Maritime Affairs, are among fifteen senators seeking reelection in 2023. It remains as a puzzle whether such an action at this 11th hours will ever save some of them from the wrath of the Liberian people for reelection when there are multiple of their alleged misdeals that have plunged the country in retrogression.

According to a senate record, Sen. Milton Teahjay of Sinoe voted to approve her, while Sen. Prince K. Moye of Bong abstained.

Based on its cross-examinations of the Liberia Maritime Authority’s Deputy Commissioner-designate for International Registry, Madam Edwina Collins, the Committee concluded that, while the nominee is bright and has a strong desire to serve her country, the country now requires a competent Liberian who can work with international partners to ensure the smooth operation of the maritime sector.

As a result, the analysis concluded that she lacked in-depth industry experience and competence and therefore was inappropriate for the position.

The Liberian Maritime Program was established in 1948 with major help from the United States of America. Liberia became a founding member of the International Maritime Organization (IMO) in 1949 and has since played a key role in advancing maritime safety, security, and environmental protection.

The LiMA is a public corporation entrusted with monitoring all commercial activities in Liberia’s maritime domain. The Authority’s goal has evolved from being a leading marine shipping and corporate registry nation to one that strategically focuses on generating and/or supporting firms in the domestic maritime domain for better economic and social benefits to the country and its people.

Liberia’s Maritime Program is currently the second-largest ship registry in the world. The Liberia Maritime Laws [Title 21 of the Liberian Code of Laws revised] govern all international and domestic waterborne commerce and enforce maritime treaties such as the Safety of Life at Sea (SOLAS), the Prevention of Pollution from Ships (MARPOL), the Standards for Training, Certification, and Watch-keeping for Seafarers (STCW), and the Maritime Labor Convention (MLC).

The authority recently announced that it is the position to thoroughly examine the coastal riches and immense biodiversity present inside the domestic marine realm as a result of its nearly seven decades of global maritime presence.

The LiMA Act of 2010 requires the Liberia Maritime Authority to offer the following services to the Liberian government:

Administrating, securing, promoting, regulating, enforcing, devising, and implementing policies, strategies, rules, regulations, plans, and programs that are directly or indirectly connected to the operation, growth, and development of the marine sector, as well as national maritime awareness; collaboration, coordination, and consultation with the Ministry of National Defense (specifically the Coast Guard), the Ministry of Justice (police, immigration, and other relevant law enforcement agencies), the Ministry of Finance (now the Liberia Revenue Authority) (Customs), the National Port Authority, the Ministry of Agriculture (Bureau of Fisheries), the Liberia National Oil Company, the Ministry of Transport, and other government institutions involved in activities.

The Authority is to introduce and support national legislation that would allow the Republic of Liberia to exercise its rights and meet its obligations under the 1982 United Nations Convention on the Law of the Sea, as well as any other maritime-related international conventions, accords, or treaties.

With this revelation, observers say it is expected that President Weah will re-nominate Ms. Edwina Collins so that she can be fairly examined base on the facts on records.