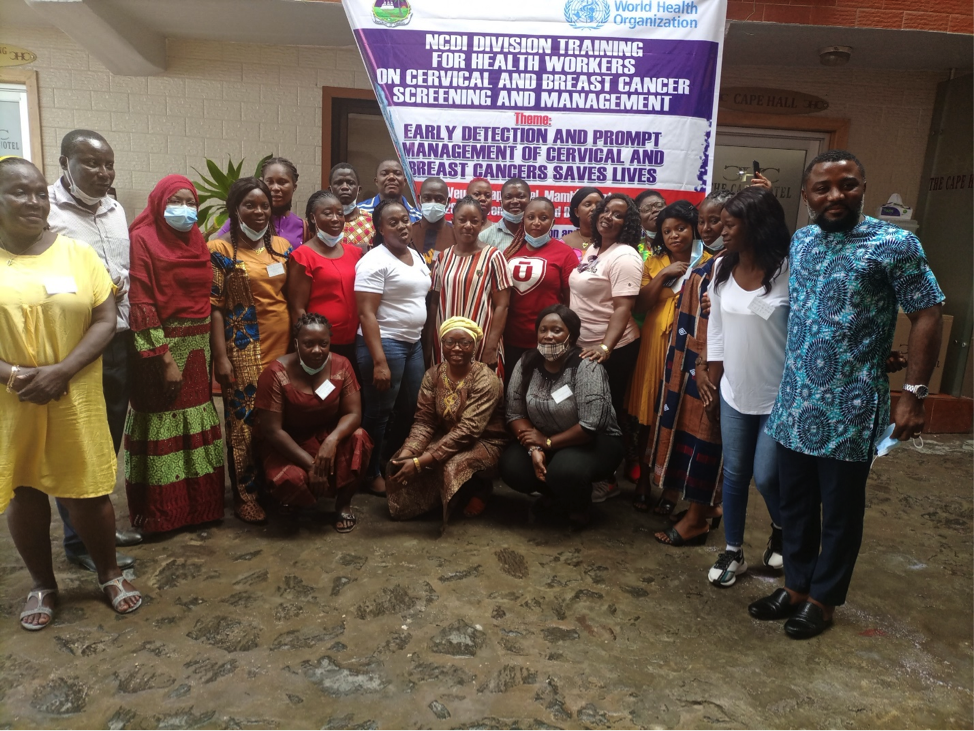 The Ministry of Health (MOH) through its Non-Communicable Diseases and Injuries (NCDIs) Division has begun a five-day intensive capacity training for doctors, nurses and midwives in Cervical and breast Cancer screening in Monrovia.

The training, which started on Friday, November 26, 2021, is being funded and supported by the World Health Organization (WHO), and aimed at eliminating cervical cancer from the world, with Liberia being of no exception.

Cervical Cancer is a cancer that’s fund anywhere in the cervix. The cervix is the opening between the vagina and womb (uterus). It’s part of the reproductive system and is sometimes called the ‘Neck of the Womb’. Studies show that nearly all cervical cancers are caused by an infection from certain types of human papillomavirus (HPV).

However, predominantly, the trainees were selected from two of the fifteen political divisions of the country, where the ministry has envisioned to setup screening and treatment centers before moving to other regions or parts of the country.

“The national Cancer policy has series of activities… Now, we are beginning firstly with Montserrado and Bong counties. In the next years ahead, we are contemplating on increasing the numbers of counties, so our people can get the needed and deserved health services”, Mrs Florence Yahnquee-Kiatamba, National Cancer Palliative Care Coordinator at the Ministry of Health, making remarks at the opening of the training.

Meanwhile, in an effort to prepare participants of the training, Mrs Kiatamba praised World Health Organization for hiring a health consultant, who developed a comprehensive Cervical Cancer module for them (Doctors, Nurses, and Midwives), which will serve as a guide to their works.

“You know sometimes in 2020, there was launch of a strategy to eliminate Cervical cancer by the World Health Organization. Other countries have started working in progress to see how best they can follow the WHO’s guide in eliminating Cervical Cancer; and since then Liberia dis sign to that commitment, but we have not been fortunate due to some financial constrain to start our own process in our country. So, the ministry has been working with WHO, seeking funding to establish a screening center in Liberia. And, this one of the criteria before you can do the screening center: to develop a module for the Country”, She explained.

Hence, upon completion of the capacity building, Cervical and breast cancer problems encountering female during pregnancy and child birth are expected to be eliminated.

“This will help our people who face these cancer problem, because we will have trained health workers who help will patients in treating the sickness”, Dr. Sopousassi V. Nicholas King, Developer of the National Cervical Cancer Module. “The module help deepened workers’ knowledge Cervical Cancer and at the same time provide clearer analyses on the drawbacks, challenges, and causes of the sickness.

For his part, Dr. Anthony Tucker, Program Director, NCDs Division at the Ministry of Health believed there are proven health interventions that can address NCDIs: “The interventions selections are based on potential health impact, cost-effectiveness, financial risk protection, and priority for the “worst-off”; We can prevent early deaths from NCDIs with the implementation of proposed interventions,”.

“I am actually proud of this interventions that will see some of the health facilities in those two selected counties to screen patients suffering from Cervical and breast cancer”, Dr. Tucker.

He at the same time, on behalf Dr. Wilhelmina Jallah, lauded WHO as well as participants for making the training a success and called for collaborative front t

Meanwhile in a related development, the Ministry of Health says its attention has been drawn to a situation it describes as fraudulent act of some group of unscrupulous individuals, it said masquerading the public space as Human Resource Director of the Ministry in disguise of providing vacancies and extorting money from their victims.

“All Vacancies information provided by means of telephone relative to the TB Annex and central MOH for the sole purpose of stealing money by these dubious and unidentified individuals, are false, misleading, and do not exist’” the Ministry said in a Press Release.

The Ministry in the release said it will consistently ensure to publish all vacancies certificate signed by the Human Resource Director, and approved by the Deputy Minister for Administration in the local dailies and on the Ministry’s website.

Meanwhile, the Ministry frowns on this diabolical act and strongly warns all those involved to desist because any perpetrator apprehended, will be dealt with according to the laws of the State.

The Ministry further clarifies that at no time it has announced any vacancy in recent time for TB Annex or central office.

However, the Ministry wants to caution the public not to do any business with these individuals, as they do not represent the Ministry.

Anyone doing business with these unidentified individuals without further inquiries from the MOH Communication Office is doing it on their own risk.