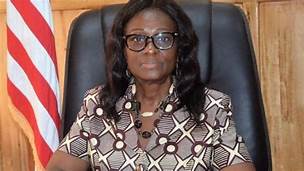 MONROVIA – Amid sporadic electoral violence in Gbarpolu County, the National Elections Commission (NEC) has called off a rerun into the 2020 special senatorial election scheduled to have taken place in Normadatonon Town, Gbarpolu’s Electoral District #3, on Tuesday, 15 December 2020.

The rerun, according to NEC chairperson Davidetta Browne-Lassana, was called off due to lack of sufficient time to conduct same amid recent election-related disturbances that took place in that part of the country.

There are reports that disagreements over the conduct of the senatorial polls ensued on Election Day, 8 December, between rival supporters of independent female candidate Botoe Kanneh and ruling Coalition for Democratic Change (CDC) candidate, Alfred Koiwood, resulting to the seizure and damaging of several electoral materials belonging to the NEC.

State security agents, according to reports, at the time, were said to be preventing supporters of Madam Kanneh, entrance to Normadatonon Town, Gbarpolu’s Electoral District #3, where the National Elections Commission had declared a rerun due to electoral dispute. Madam Kanneh, who is the major competitor to the CDC candidate, Koiwood, is ahead of all other candidates, according to over 72 percent of votes from the County tallied so far by the NEC.

It can be recalled that in a WVN exclusive interview, Madam Botoe disclosed State security officers have erected checkpoints where only supporters of the ruling party (CDC) are allowed to cross into Normadatonon Town, where a rerun has been announced by NEC due to the seizure of ballot boxes by a local town chief, on December 8, 2020.

“There is a problem in Nenmondatornon (a town in Gbarpolu County) polling center where there will be election on Tuesday, so I decided to come at least to try to talk to our people around but then the securities are denying us entry in the Town. I agreed that they said I am a candidate, I shouldn’t enter the town okay, but then they allowed the Cdcians to enter the Town, they denied my boys (supporters) from entering the town”, Madam Botoe said at the time.

Madam Botoe said she demands equal treatment and fairness from national security personnel, adding that instead of being regime security.

“The Security should be here for justice but they’re saying that they will tell the Cdcians to go out, we’re waiting for them to talk to them. In the first place they were not to allow them in, while they stopped us entry. Cdicians have to leave the town too. We want the international community to know what is taking place here in Gbarpolu. Please help us reach this to the attention of the International Community and Human Rights groups in the County,” Madam Botoe pleaded with WVN.

Howbeit, NEC chairperson Madam Browne-Lassanna told state radio Tuesday that although voting should have taken place in the previously scheduled rerun senatorial election in Gbarpolu, because of the volatile security situation in the area, the NEC was announcing a cancelation of the process, saying, “we are announcing now that because of the situation, voting will not take place today.”

She disclosed that as a result of the election day fracas between rival supporters of leading candidates in the Gbarpolu’s senatorial polls, some NEC staff who ran into hiding for fear of their lives cannot be located as at now, pleading that the Commission needs ample time, if it should conduct the rerun election in that part of the country.

“We need some time to locate our staff, who we are informed are in hiding. So far, the update that we’ve received this morning is that some of our staff were found and were taken to safety by the Ministry of Justice through the LNP. They are still in search of one or two of them,” she said.

She noted that the issue with approximately 20 NEC staffers in Gbarpolu is traumatizing, stating, “we like to note that this is traumatizing – they are really traumatized because of what they have gone through. So we have made the decision to take them out of Gbarpolu and return all of them to headquarters, and when we are assured of security in the area, we will go back to do the elections in Normadatonon Town.”

Despite the election related tension brewing in Gbarpolu, the NEC chairperson said the Commission remains engaged with local authorities in the County, as well as authorities of the Ministry of Justice, and Ministry of Internal Affairs, with the hope of swiftly quelling the situation.

There are unconfirmed reports that the Town Chief of Normadatonon Town, allegedly confiscated ballot boxes belonging to the NEC, and the rampaging of a country devil, a report to which Madam Browne-Lassana expressed the hope that authorities at the Ministry of Internal Affairs, who she said have jurisdiction over such local government official, and issues of a country devil would speedily intervene.

“You know like you have the [country] devil coming out, and you know that when the devil comes out, normally, people will not come to the polls. So they need to take care of that aspect – as well as the Justice Ministry needs to ensure that there is security in the area. Because where you have insecurity, especially the way it’s gone in Gbarpolu County, where our staff are threatened, they have to be locked up – so it’s just impossible to do any elections there right now,” she emphasized.

We will need to establish all of these here-says and they-says – I will put it like that. Because our staff, once we get them out they will be able to tell us exactly what happened there.

She disclosed that scanty information coming out of Gbarpolu from the traumatized NEC staff reveals that as a result of the skirmishes between rival supporters, NEC ballot boxes in the area were taken away again, and that the possibility of retrieving such ballot boxes would prove to be difficult, because according to her, they were thrown in the water by angry people.

She added that elections materials that were expected to be used in the conduct of the rerun polls were also allegedly taken away and destroyed, stating, “so it goes to say that if you have to have any election there, you have to have new set of materials. We have to recall the traumatized staff there, we have to replace them – so we need some time.”

Amid several reports emanating from Gbarpolu regarding what mmay have actually sparked up the melee, and as what actually have been obtaining the days following, Madam Browne-Lassana urged members of the public needs to exercise patience and wait until NEC staffers in Gbarpolu return to the Commission’s headquarters in Monrovia, and give the NEC Board of Commissioners a thorough briefing as to what happened before the NEC can speak emphatically on the issue in that part of the country.

She said the NEC is deeply concerned and dismayed about the problems emanating from Gbarpolu, which she noted has impacted so much on the electoral process, the NEC’s premises, as well as its staff.

“At one point, we even had reports that they were going to burn the NEC down, and staff were in there locked up, they were surrounded again, like we had in other parts [of the country] like the one we had in Grand Kru, Madam Browne-Lassana stressed.

She then called on all Liberians everywhere including candidates, partisans, and nonpartisans to observe the peace, adding, “we need this in order to complete the elections in those areas where we’ve been having the issues.

She maintained that all Liberians need to do everything they can to live together, to work together, and to go to the polls, knowing that everyone is secured, saying, “and at the end of the day, it’s just about this country moving forward.”

“We cannot afford any disruptions again. Those who probably may have been injured, it does not send a good signal to any one of us. We pray that they be able to get some relief – and also we pray that our staff, those who have not be found, will be found and return to Headquarters, she added.

She pleaded with those who may be outside of Gbarpolu but have the power to manipulate the ongoing events in the County to desist in the interest of peace, and the smooth conduct of the elections.

“And again, those of us who probably are not on the ground, but may be instigating some of these things, we are appealing to you to please do everything in your power to allow calm to return and for Liberians to return to the polls, and then we get the final results, and put these elections behind us – because we have a huge task ahead of us to plan for by-elections again and to plan for 2023,” she noted.