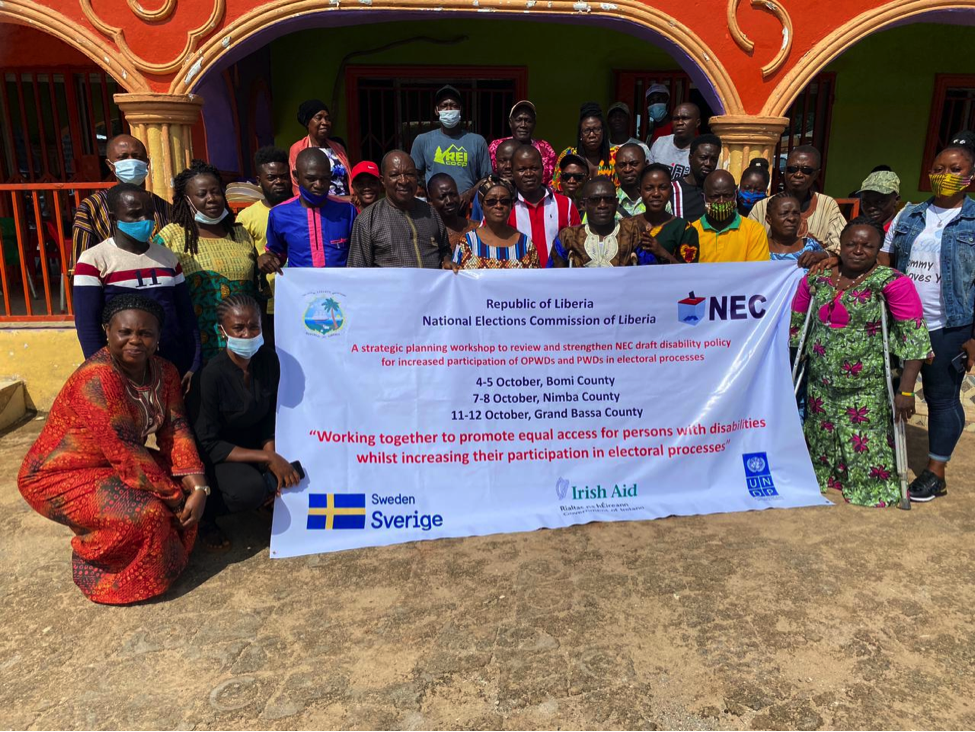 The National Elections Commission (NEC), on last Thursday commenced the second in a series of regional workshops aimed at reviewing and strengthening the NEC Draft Policy for Persons Living with Disabilities in Ganta City, Nimba County.

The Gender Section of NEC-Liberia is conducting the second two-day regional workshop in Ganta, Nimba County for nearly 30 participants from including the media, under the theme, “Working together to promote equal access for OPWDs whilst increasing their participation in the electoral process”.

Accordingly, this NEC-Liberia Draft Policy for persons living with disabilities also seeks to develop a strategic action plan to increase the participation in the electoral process for Persons Living with Disabilities.

Speaking Thursday at the start of the draft policy workshop in Ganta, NEC-Liberia Chairperson, Madam Davidetta Browne Lansanah said the Commission cherishes the increasing partnership with persons living with disabilities, adding, “The more recommendations and interest they share with the Commission, the better electioneering will be in Liberia”.

For their part, the Liberians living with disabilities appealed to the NEC that whatever election it conducts in Liberia, to make them who are members within a particular county or district a part of the Civic and Voter Education activities, adding they can properly spread the CVE messages.

According to an NEC-Liberia statement, the Commission’s Gender Section is collaboration with the United Nations Development Program, UNDP Elections Support Office in Liberia.

The Commission in the statement indicated that its Chairperson expressed thanks to the Governments of Ireland and Sweden that are proving funding for the three regional gender workshops on the NEC Draft Policy for persons living with disabilities throughout Liberia.

On Monday, 4 October 2021, nearly 40 representatives from Bomi, Grand Cape Mount, Gbarpolu and Montserrado Counties representing Persons with Disabilities, including the Media, participated in the first of the series of two-day workshops in Tubmanburg City, in Bomi County.