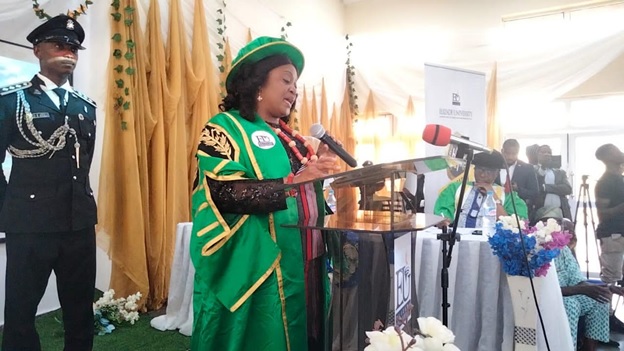 Monrovia-Liberia, Friday, Oct. 21, 2022: Chief Dr. Jewel Howard-Taylor, who is the Vice President of Liberia, spoke at Elizade University’s 6th and 7th convocations in Ilara-mokin, Ondo State, the Federal Republic of Nigeria, on October 19th and 20th, 2022.

The Board of Trustees of the University says that the Vice President has been a great example of the kind of true leadership that is needed in the time of the African Renaissance.

According to a message, Madam Vice President was thrilled to be chosen out of so many talented intelligentsia children and daughters and was very grateful for the chance to speak.

VP Howard-Taylor began her speech on the topic “Africa Renaissance: Key for a New Global Leadership Paradigm” by calling for a new philosophical mindset that she believes will usher in the African Renaissance.

She said that to build a more whole, sustainable, inclusive, innovative, and developed Africa for ourselves and our people, we need a shift in how we think and a new paradigm or pattern.

Madam Vice President also hinted that a new philosophical way of thinking is needed so that a new path with determination and commitment can lead Africa to become the great continent that God made and gave us, which is what its people desperately want.

She said that even though our ancestors died, sweated, and cried so that Africa could be free, we are still bound by economic slavery.

The Vice President also said that the right kind of leadership is important for starting and keeping the African Renaissance going. She asked academic institutions, organizations, and families to not only start paying attention to the minds of those under their control or tutelage, but also to be deliberate and intentional about changing the minds of those new leaders to plant positive ideas.

She said that for the African Renaissance to happen, Africa needs leaders who are visionary, aspirational, exemplary, agile, compassionate, honorable, selfless, accountable, and inspiring.

She further argued that it is possible to have all the leadership traits in one leader, citing examples of President Paul Kagame of Rwanda, former South African President Nelson Mandela,  former Ghana President Kwame Nkrumah, amongst others.

The Vice President came to the conclusion that we can’t have an African Renaissance without leaders who understand the spiritual side of people.

She said that wisdom comes from God and that a leader must have a spiritual connection and understanding to be selfless, wise, and sharp when making decisions and leading the African people.

While in Ondo State, Liberia’s Vice President was bestowed with the Chieftaincy Title of “YEYE KOREDE OF ILARA-MOKIN” by His Royal Majesty Oba Abiodun Aderemi Adefehinti Agbekorun II, the Alara of Ilara-Mokin. The title means “a person who brings good tidings.”

Elizade University is a private university that opened in 2013 in Ilara-Mokin, Ondo State, Federal Republic of Nigeria.

The University was founded by Chief Michael Ade Ojo and is amongst the top-notch universities and fastest growing universities in Nigeria and Africa.

WE RECOMMEND That the Law On Nudity Be Strictly Enforced