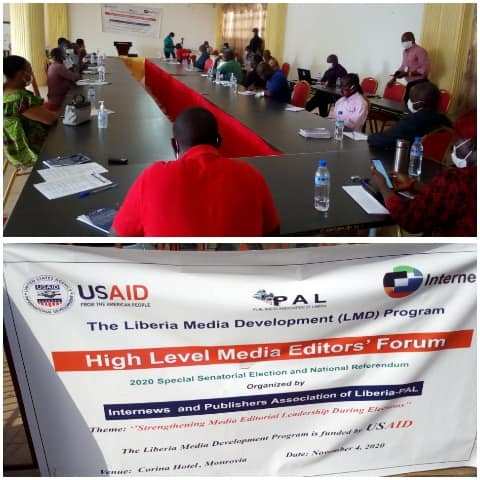 Internews, in partnership with the Publishers Association of Liberia (PAL), recently launched a Newsroom Manual for Editors in Monrovia.

The Manual was officially launched at a one day High Level Media Editors’ Forum held at the Corina Hotel in Monrovia.

The Manual is a guideline and sensitive approach on election reporting which is intended to strengthen the capacity of editors and reporters in the performing their professional duties.

The forum was held under the theme: ‘Strengthening Media Editorial Leadership during Elections.’

It was organized by the Publisher Association of Liberia (PAL) and Internews with support from the United States Agency for International Development (USAID).

Turning over of the Handbook, the LMD Chief of Party, Lien Bach, said the forum was intended for media institutions in Liberia to discuss the challenges they face relative to reporting on the Special Senatorial Elections (SSE) and National Referendum scheduled for December 8, 2020.

According to her, the forum was a great opportunity for editors to share their unique experiences, knowledge and insights with one another.

“We hope that you, as editors, will empower your journalists to produce facts-based and objective reports that resonate with the electorate to promote free and fair election. Our InterNews media advisor has developed a Newsroom Manual as a tool to guide editors prepare for the election coverage, This is why we are proud to present to you today,” Madam Bach said.

She also appreciated the PAL and LMD Program teams for organizing the event.

Giving an overview of the forum, the President of the PAL, Mr. Othello Garblah, described the occasion as necessary and timely.

According to him, the forum came at a time when it is necessary for journalists and editors. “We are very glad to have a team of PAL here,” Mr. Garblah said.

The PAL President emphasized that the Special Senatorial Election (SSE) and the National Referendum are crucial in sustaining democracy and peace in the Liberian nation.

He used the forum to pledge the PAL’s continuous collaboration with Internews in the improvement and vibrancy of the Liberian media.

Also speaking at the occasion, the President of the Press Union of Liberia (PUL), Charles Coffey, said the forum will help strengthen editors’ skills for the upcoming Special Senatorial Election (SSE).

Mr. Coffey told the editors that their professional judgment should be significant as it relates to happenings during the elections and the referendum.

“I trust the ability of the editors,” Mr. Coffey asserted.

He used the time to thank the LMD-InterNews and USAID for their support in hosting the forum.

Speaking on the topic: ‘Ensuring Balance Media Coverage during Election’ the Minister of Information, Culture Affairs and Tourism (MICAT), Legerhood Rennie, indicated that the role of journalists is often fragile during elections.

He emphasized that journalists should be knowledgeable and do more research on election and referendum issues before reporting on them.

Minister Rennie who is also a Lecturer of Mass Communication at the University of Liberia calls on journalists to balance their reports by contacted all sides who may be connected and to be accurate and show clarity in their works.

He emphasized that fairness and balance reporting in electioneering process is critical for journalists and media institutions.

He also cautioned editors and reporters to be careful when carrying out their professional duties and not to fall prey to election violence.

During the forum, several topics were discussed which included “The Role of the Media in Civic and Voters Education; Election Coverage, Avoiding Conflict’, ‘Security Implications and Precautions for Journalists Covering Election’.