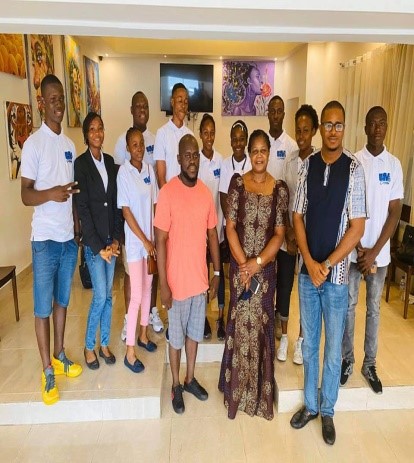 Next Move – Best Move, a youth advocacy group, has been cultivating young leaders for the advancement of the Liberian nation in terms of peace, development and progress.

The campaign is in week eight as the group aimed at changing the perceptions and mindsets of some young Liberians against acts of lawlessness and violence.

The Next Move Best Move- Emerging Leaders is a campaign with the sole purpose of mentoring and focusing on developing leadership skills for school-going children.

The campaign focuses on providing guidance and role models for ten emerging leaders to discover themselves (Personality).

It endeavors to ignite a conscience of ownership and inclusion in the participants as a rebuilding process by living meaningfully (Proactive-ness).

As they prepare for life in the real world, the aspect of work, career, family, and national responsibilities needs consideration (Patriotism).

It also anticipates opening accountability structure amongst young people, their peers, and their mentors as they develop full potential (Productivity).

The campaign is in two phases. During the first phase, young leaders will be inspired to be relevant as they aspire to encourage their peers to be the same.

“We expect to help shape the future by establishing goals and motivating emerging leaders to inspire themselves to guide and influence others,” said Benjamin L. Tulay Sr.

For her part, a facilitator of the emerging leaders Campaign, Kpambu Pelima, who is also young  woman advocate and intellectual urged young people to become emerging leaders by connecting with others positively, networking and to raise their profiles, abilities and personalities.

Pelima, cautioned them to become innovative and rise above negative perceptions about young people in the country.

The Young Woman advocate who lectures the students about their roles in the Society and how such roles affect their up- bringing , among others said negative perceptions affect everyone. So there is a need for more inspirational programs of such for the benefit of young people and others in the society.

The Week Eight Edition of the NEXT MOVE – BEST MOVE Campaign for Emerging Leaders was held under the theme: “Perspectives Make Reality.”

Students Mya-Toe of the B. W. Harris Episcopal High School and Jessi Quoiquoi of the New Jerusalem High School acknowledged the facilitator for the valuable lessons learned by the participants.

“We must say thank you to our Facilitator, Madam Pelima for the lecture and the courage she has given us about rising above negative perceptions.

” I am so glad to be a part of this program and I have learned a lot, what I have learned is how to manage your perception, I am now aware that negative Perceptions effect our lives and there’s need we erase them, think positive and have the right Perceptions, said Jessi Quoiquoi .

As for Mya- Toe of the B. W. Harris High School, she said “I think there is a growing sense of understanding that this message of Perception, personality, responsibility will help us a lot, in our endeavor, how we grow as children.”

“It will help Emerging Leaders who hope to amplify youth voices, and help them understand themselves. I have learned that we have to be ourselves and think about what is best for us,” she said.

” We are not made to think wrong or shame people because of how they appear or behave but to rather understand and think in the right path, for who they’re, so that they too can take us for who we are”, Toe emphasized.

She added that “negative perception is bad and I must now do without it”, she stressed.

Meanwhile, the Next Move- Best Move, key objectives is center around developing cohort of leaders to become agents of positive change that will require accountability from each other.

Another focus is to develop a platform that encourages the conscience of ownership and inclusion of youth in the rebuilding process of effective meaningful leadership roles.

In addition the program also helps to inspire emerging leaders to develop strong private/public goals as they aspire to make others stronger in the same vein.