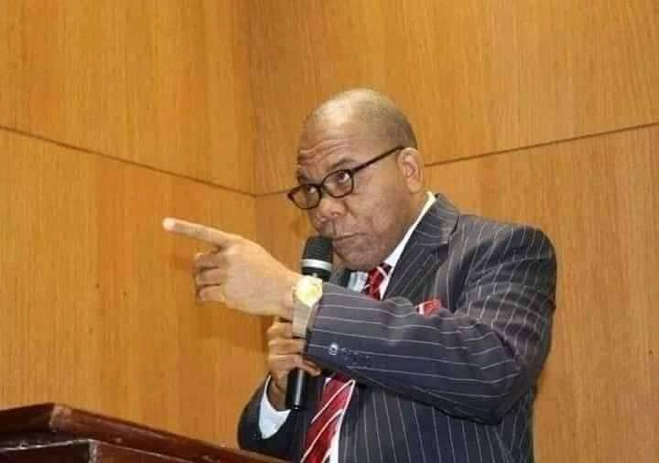 Senator Albert Chea has spoken out, claiming that it would be unconstitutional for the National Elections Commission (NEC) to disallow any of the three sanctioned officials from running in the elections as Liberians grow more dubious of the political and electoral endeavors of sanctioned government officials.

He revealed the information late on December 8, 2022, and added that, per constitutional requirements, sanctioned government employees cannot be prevented from voting without first going through the legal system and being found guilty of the purported act committed.

According to Article 20(a) of the Liberian Constitution, no one shall be punished unless proven guilty beyond a reasonable doubt in a court of law or by an equivalent body.

“The elements of due process, as indicated in the Supreme Court Opinion in Wolo Vs. Wolo, Re: (5LLR423) (1937), hold that due process is a law that hears before it condemns and renders judgment only after trial, gives an opportunity to appear and produce evidence, and to be heard in person or by counsel or both; that it is unconstitutional to deprive any person of his or her property or other rights without notice, an opportunity to defend themselves, and both,”

He claimed that anyone who is compelled to leave, losing their job and self-esteem as a result of an accusation that has not been established via due process, is being abused, which is against our organic law.

Furthermore, he emphasized that Article 17 of the 1986 Constitution protects the right for Liberians to associate with whoever they choose, with the exception of situations where doing so poses a risk to public safety or national security.

And neither we nor our prior colleagues have passed legislation that prevents a Liberian from taking part in a political or other civil procedure without first being adjudicated guilty in accordance with the due process clause of the constitution, he continued.

It should be noted that on August 15, 2022, the Office of Foreign Assets Control (OFAC) of the US Department of the Treasury identified three Liberian government officials for their alleged involvement in public corruption in Liberia.

They included Bill Tweah-way, a former managing director of the National Port Authority, Syrenius Cephas, a former Liberian solicitor general, and Nathaniel McGill, a former minister of state for presidential affairs and chief of staff.

Both the former Minister of State for Presidential Affairs and former Chief of Staff, Nathaniel McGill, and the former Managing Director of the National Port Authority, Bill Tweah-way, have been talking to residents of Margibi and River Cess counties, respectively, about running for the senatorial seat in 2023 since the former government officials were sanctioned.

All properties and interests in properties belonging to these targets that are located in the United States or that are in the possession or control of Americans must be prohibited and disclosed to OFAC, according to the US sanctions implications.

Additionally, any entities owned by one or more blocked persons that are owned 50% or more by them are blocked, whether they are owned directly or indirectly.

According to OFAC regulations, dealing with the property or interests in property of blocked or designated persons is prohibited for U.S. citizens and anyone conducting business in the country (including those involving transactions that pass through the country).

Additionally, it implies that those who conduct certain transactions with the people and organizations specified today may also be liable to punishment or enforcement action.

It further underscores that any foreign financial institution that knowingly assists a large transaction for any of the people or companies identified might face sanctions from the United States, unless an exception applies.

Not only does OFAC have the authority to designate and add individuals to the SDN List, but it also has the willingness to remove those individuals from the SDN List in a manner that complies with the law.

“My mission is to improve women’s lives…” Says First Lady

As Liberia Celebrates 19 Years of Peace, We Join ECOWAS to...

NEC office under siege in Nimba