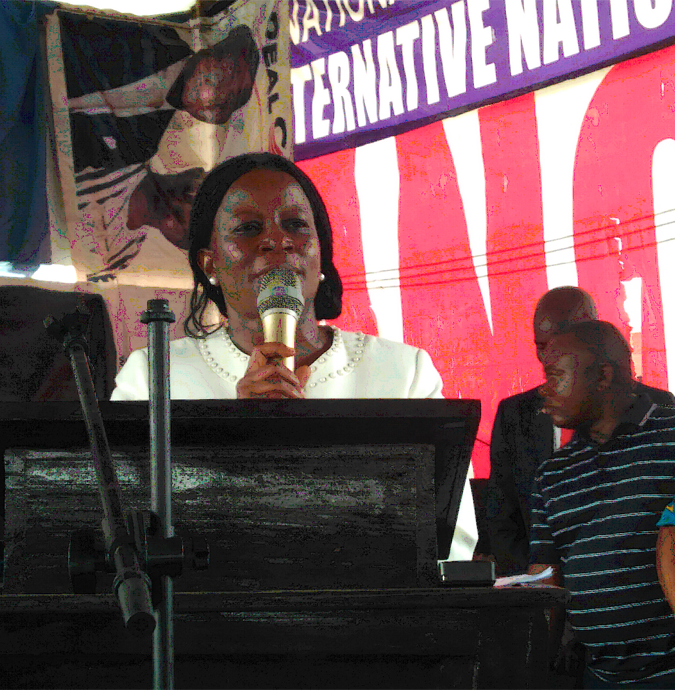 Female gladiator and Standard bearer of the opposition Liberty party, Senator Nyonblee Karnga Lawrence has taken Mantle of Authority to stirred the affairs as Chairperson of the joint- opposition Collaborating Political Parties (CPP) for the next eight months.

At the occasion marking the turning over ceremony of the CPP leadership from Alternative National Congress (ANC) to the Liberty party, held at the ANC headquarter in Sinkor, Madam Lawrence vowed to change the spectrum of the opposituon Collaborating Parties (CPP).

Affectionately describes as the Lioness Madam Karnga – Lawrnece dedicated her Chairpersonship to the Women of Liberia and said the title of her Chairpersonship and A Woman ascendency to Top position of a Political party, means of Liberia now has the chance to change the course of the country’s history by impacting a major political organization.”

“My chairmanship is for all women’s of Liberia. Let us join our forces to press for more women’s inclusion and participation which is only possible in the CPP.” Senator karnga- Lawrence said.

Senator Lawrence said the CPP is not only pushing to gained state power, which will transforemed the Country, but also inline with demoncracy and gender-equality is the hallmark of the political block ambitions with the fact that the CPP were not only able to meet the 30% threshold of Women participation in leadership role, but a woman now chairs the CPP; which is a boost of all Women of Liberia, urging them to joined the CPP force as Women push for more spaces in electoral processes.

Karnga-Lawrence, stressed that the CPP, now have Woman at the helm of authority, which means a lot for Women of Liberia, something she said the ruling Coalition of Democratic Party, couldn’t do, but “Shamefully they’ve stand against Women.

She said the CDC have tries hard to cheat and undermine the progress of women despite the fact a Woman won the Vice Presidential seat of the Country, Woman as been marginalize, Rape and discriminated among their male counterparts, which needs to stop.

She stressed for gender-equality and equal balances in electoral processes; our right to participate and our success in the elections is limited, it’s about we stand together and our collective effort will ensured more Women in leadership.”

Karnga- Lawrence, than pledge her commitment to transforming the CPP, as she urges them to present a standard bearer and vice standard bearer to the Liberian people before the end of 2021.

The Female gladiator and new leader of the opposition Collaborating Political Parties has called on heads of constituent members of the CPP to work together and ensure that the group presents a standard bearer and vice standard bearer to the Liberian people before the end of 2021.

She further indicated that the CPP will not make those mistakes that they made during the 2017 general and presidential elections; noting that the group will continue to engage the CDC-led government and provide necessary recommendations to ensure that the right things are done.

Senator Lawrence also reassure Liberians that the CPP commitments to the country is far beyond any personal ambitions.

She named collective efforts, Unity and Strength with in the CPP, which will make some changes at the helm of the Country, when the CPP shall take power and bring relief to the people of Liberia.

“Our collective efforts, our strength and in unity, together with our people we will transform Liberia.,” Karnga-Lawrence said.

For his part the former Chairman of the opposition Collaborating Political Parties CPP and Standard bearer Alexander Benedict Cummings, said for the last eight months under his leadership as chairman of the CPP, the Collaborating parties was able to transform to words in  papers than thoughts.

Which means actions and reality is deeply rooten to change the course of the Country.

He outlines collectives efforts, hard works and together in unity as keep the CPP together in its request to redemed the Country, from the wicked hands of the Coalition of Democratic Change led Government.

Cummings said the ANC turning over the leadership to Senator Nyonblee Karnga-Lawrence and the Liberty party, doesn’t means that the party is backing off the CPP, but remain committed and continued to engage with activities of the CPP to ensure that they work in the best interest of the country.

“I am pleased to say that with all of your support, today, I hand over a CPP stronger than I inherited it from my predecessor and it falls upon you, Madam Chair, to hand over an even stronger CPP to the next chair.” Mr. Cummings said. “This is how we must continue to build and progress.”

Also speaking the standard bearer of the Former ruling Unity Parties, Joseph Boakai said Liberia as a country as change under the leadership of the ruling Coalition of Demoncratic Change headed by President George Weah as badest west african nation, as its citizens continues to suffer from the embarrasment of his leadership.

embarramentthe worse form of  Government Liberia had ever had with discrimination, rape, sexual gender-base violence, embarrament being undertaken by the CDC- led Government.

Boakai indicated that Liberia will recover the messess and enjoyed the fruits of her womb, when the Collaborating Parties can take a mantle of Authority from the shameless and harmful CDC in the 2023 Election.

“You are a Strong and Committed Woman”