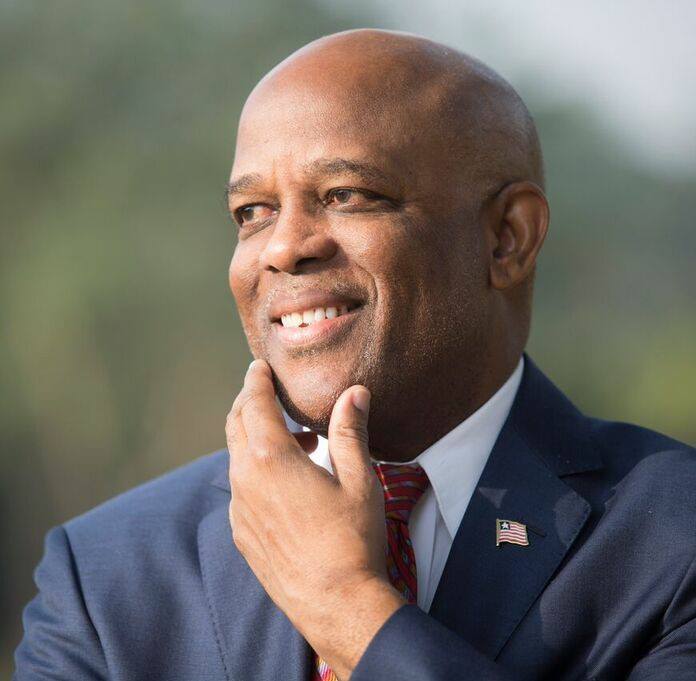 MONROVIA – Exactly a year following his demise, fallen Liberian politician and statesman, Cllr. Charles Walker Brumskine is being remembered as “a man of peace.”

Brumskine, the founding standard-bearer of the opposition Liberty Party (LP), died in his 69th year, on November 20, 2019, at the John Hopkins Hospital in Baltimore, Maryland, the United States of America, following a protracted period of ailment.

Howbeit, one year on, Liberty Party Secretary General Jacob Smith has eulogized the former LP standard-bearer in three successive elections, as “a man of peace,” who was never combative in any of his engagements, whether private or public.

Jacob told Truth FM radio last Thursday that in as much as the late Cllr. Brumskine wanted the best for Liberia, he was never bent on getting his way and will done at all cost, or in manners that were void of peace.

Jacob recalls that in 2005, following the presidential election that year, someone in the international community, who the LP secretary general did not named, had placed a call to Cllr. Brumskine suggesting that he was cheated, and that after such call, there were suggestions that the party should take to the streets in protest against the election results.

But being a man of peace, Jacob narrated that Brumskine resisted taking the path of violence being sought at the time by some of his supporters, with Jacob adding that the fallen LP standard-bearer indicated that the purpose of the Liberty Party was not only to win election and assume state power, but to positively transform the Liberian society.

Jacob quotes Brumskine as further stating regarding the 2005 election episode, that in order for the LP to transform Liberia, such transformation would not take place in a chaotic environment, noting that the fallen LP political leader further told his supporters that the right thing to have done was to peacefully pursue other options, and that if those options did not work, they would let it go.

“So he had to calm down the partisans” [not to take to the streets], Jacob said of Brumskine, adding that the former senior partner of the Brumskine & Associates Law Firm was “inherently a man of peace.”

Jacob also made mention of Liberia’s presidential election in 2017, which results were contested in court by Brumskine and his Liberty Party, on allegations of fraud and electoral irregularities.

“You saw that here 2017, even at the time when people were so agitated. If Brumskine had just said we are getting on the street, people would have followed him. But he said we will go to court,” Jacob further said of Cllr. Brumskine.

He said there is so much about the legacy of Cllr. Brumskine, noting that the Brumskine legacy will be reflected in those things he did and believed in.

“He believed in the rule of law, in accountability, integrity-and I must say that Brumskine was a man of integrity,” Jacob added.

Jacob then disclosed that in memory of the late Cllr. Brumskine, who he described as a man of peace and a man of integrity, who he said demonstrated such virtues over time, the Liberty Party in collaboration with the family of the fallen statesman organized series of a daylong activities that kicked off simultaneously on last Friday, in his hometown of Buchanan, Grand Bassa Couty and at the LP’s Headquarters in Monrovia.

Cllr. Brumskine, who contested Liberia’s presidency thrice, came to political limelight in the 1990s as an ally of Liberia’s jailed former president Charles Taylor. Both men were members of the then ruling National Patriotic Party (NPP).

Brumskine was President Pro Tempore of the Liberian Senate during the early period of Taylor’s reign, but by 1999, the pair fell out following heated party wrangling over Brumskine’s nationalist posture regarding workings on the Senate as opposed to what the presidency wanted, thus creating a feud between the President and the Senate President.

The feud between Taylor and Brumskine led to the latter fleeing the country after his life was reportedly threatened by Taylor and some of his supporters.

He returned to Liberia in 2003, and contested the 2005 presidential election, garnering nearly 14% of the total votes cast, which was 6% less than second-placer, Ellen Johnson Sirleaf, who later went on to win football legend George Manneh Weah in a subsequent presidential run-off election.

He again, after six years in 2011, unsuccessfully gave the presidency another shot-and in 2017, Brumskine in his third attempt, came third, after receiving 149,495 votes, accounting for 9.6 percent in the presidential election that year.

Cllr. Brumskine led the charge, challenging the 2017 presidential election results at the Supreme Court of Liberia, on allegations of electoral fraud and irregularities, a move for which to date, he’s hailed, though his party lost the election and lost the litigation, with the Supreme Court ruling at the time that though there were proven electoral fraud and irregularities, but same were not sufficient enough to overturn the results of the elections.

Massive preparations underway to give Weah rousing welcome to Lofa

LDEA confiscates over L$8 million worth of narcotics substances