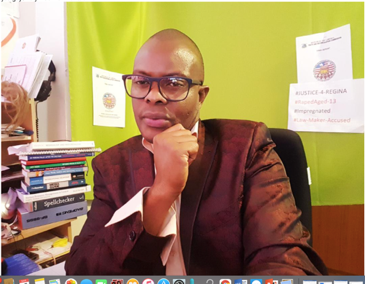 President of the republic of Liberia

I present compliments of my highest esteem with the hope that my communication will meet you in excellent healthy condition as you steer the state of affairs of our dear Republic.

Your Excellency, as a concern citizen, founder and executive of the above advocacy organization, this is my fifth letter written you since you came to power, but unfortunately for me non of the four letters before this was ever replied to. However, this will not put me off especially considering you as our father, father of the nation and the president of our country.

In July of 2020, I wrote you a letter which was also published regarding the issue of gender based voilence and rape in our country, my communication which was followed by me appearing on several radio stations and newspapers calling for a mass protest against gender based violence but especially rape. In deed the protest was held but was met by risistance from the Liberia National Police in which many of your citizens were badly handled, sent to police jails, and the intent of the protest which was to send signal out to the rapists and your government that our nation was bleeding and our children are being damaged through the acts of rape and sexual voilence was hugely interrupted by the action of the Liberia National Police.

Although this protest ended abruptly, but I also felt that your government did get our message which led to your office hosting a tow-day national conference of sexual and gender based violence at the Ministry of Gender, Social and Children Protection in August 2020 bringing together many service providers including us from the civil society community. It was a pleasure to have been a part and contributed through the various workshops that were held.

Your Excellency, this issue of rape is back again with huge force across the country and most of us, as your children/citizens are very much concerned and worried of the pace the rapists have taken despite all of the efforts we all made at that natioanl conference on sexual and gender based violence of August 2020. As a father myself, I keep wondering as to how can we win over these evil acts being committed by heartless citizens of ours. As a father of the nation, Your Excellency; like I suggeste in the past through a special communication to you in July of 2020, you have to lead us robustly in the fight against these acts which are destroying lives.

Imagine we have just burried another girl aged 13 after she sustained enjuries through rape. We, as advocates are talking daily but it is like the rapists are over powering us. I am once again appealing to you to kindly and exclusively address the nation on these issues including domestice violence, sexual and gender based violence as well as rape. Your Excellency, on Tuesday March 8th, 2022 the world including Liberia will be celebrating Internatioanl Women’s Day with the theme ‘Breaking The Bias’. We the people of Liberia will not succeed in breaking the bias if you personally as the ‘Feminist In Chief’ cannot lead us to take a strong stance against the evil that have engulfed our society and killing young children.

Until you can lead followed by our mothers, including the first lady of Liberia the mother of our nation, our Nobel Peace Prize winners, our mothers at the Capital Building, women cabinet ministers, and the rest of us in the quest of ending this nightmare in our society, these issues of sexual and gender based violence will continue to destroy homes, and families.

In addition to my previous recommendation made at the two-days national conference on sexual and gender based violence of August 2020, I like to recommend the following to your government as a way forward in dealing with this huge devil covering our country.

May the Almighty God continue to bless our nation.

Toxic Politics: House of Representatives’ letter to CEB, my perspective