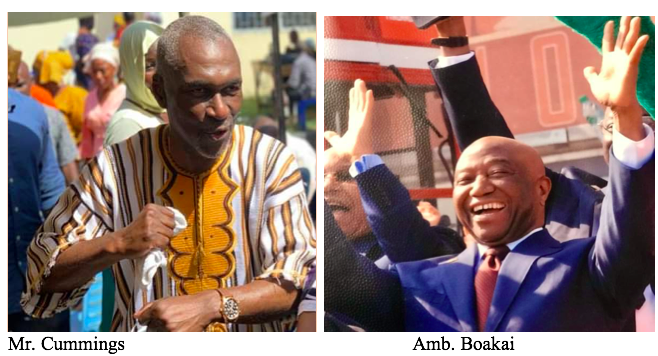 The Collaborating Political Parties (CPP), which should have become a political marriage to democratically unseat the ruling Coalition for Democratic Change (CDC), has apparently reached a final dissolution following the Supreme Court ruling on Friday.

Sooner or later, they worked together, but they had a big fight among themselves that went all the way to the Supreme Court Bench.

On Friday, June 3, 2022, the Liberian Supreme Court handed down an opinion that gives the go ahead to the National Election Commission (NEC) to allow the opposition Unity Party’s candidate, Galapkai Kotimai, to participate in the pending Lofa County By-election.

The court in its ruling mandated the supreme court clerk to send a mandate to the NEC informing that body of the decision of the court to reverse the NEC ruling that prevented the unity party from fielding candidates in the Lofa by-election. The National Election Commission was hesitant to allow UP to field candidates in the Lofa by-election and any other elections in keeping with a provision in the framework document that allegedly prohibited any of the four parties that would choose to leave the arrangement. While Boakai’s supporters contended that such a provision prohibiting any party from fielding a candidate was fraudulently inserted in the document, supporters of Cummings were pushing for the application of the provision.

The Court, in its ruling, described the said provision as an act that disenfranchised the people and strangled democracy.

The court decided that it is the law that courts of records, not administrative bodies like the NEC, have the power to declare rights, status, and other legal relationships. This means that the NEC did the right thing when it turned down the request in the appellant’s letter of complaint as well as the appellant’s request for an advisory opinion.

The court said that the Constitution of Liberia is the highest and most important law in the country, and that all authorities and people in the Republic must follow its rules. Any laws, treaties, statutes, decrees, customs, and regulations that are found to be in conflict with the Constitution, to the extent of the conflict, are void and have no legal effect, and the Supreme Court must say so.

Chief Justice Francis Korkpor gave the ruling and said that the Supreme Court recognizes and agrees with Article 25 of the Constitution of Liberia, which upholds the principle of the sanctity of contracts. However, if a contract goes against the Constitution or any other law, it has no sanctity and cannot be upheld, protected, or enforced.

The ruling continued by stating that the purported Section 8.5 (2) of the Framework Document of the collaborating, which prevents constituent political parties of the CPP that have duly withdrawn from the said CPP from fielding candidates in an election that violates Articles 17 & 18, 79 of the Constitution.

The National Election Commission’s decision was overturned by the court because it was based on something that the court didn’t think was a good reason to stop any party from running candidates in any election.

“Therefore, and because of what has been said, the Board of Commissioners of the NEC is reversing the decision of the Hearing Officer.”

The Supreme Court further stated that the purported Section 85(2) of the CPP Framework Document, being manifestly against the Constitution, statutory laws, and public policy, is hereby declared null and void ab initio, stating that the appellants, ALP and UP, having duly withdrawn from the CPP, are free and at liberty to pursue any political interest in their names, including the fielding of candidates in the ensuing Lofa County election and senatorial by-election, if they wish to do so.

Following the ruling, a Womenvoices reporter said, the grounds of the supreme court were submerged with cheers from supporters of the ALP and UP on the one hand, who ended up booing Liberty Party Chairman Musa Hassan Bility and others who had prayed to the NEC to deny the UP candidate.

In an apparent happy mood, upon hearing the news, the former Vice President of Liberia, Joseph Nyuma Boakai, posted on his Facebook page celebrating the fact that the High Court ruling as renewed hope that Liberia is on its way to experiencing selfless, quality leadership, stating that the Supreme Court of Liberia has ruled that the Unity Party can field a candidate in the Lofa County Senatorial by-election.

The Standard Bearer of the Unity Party congratulated the legal team headed by former Chief Justice Cllr. Gloria Musu Scott, Chairman Amin Modad and the leadership of the party, the legislative caucus, partisans and supporters of the UP, the All Liberian Party Benoni Urey, and the Liberty Party of Senator Nyonblee Karnga-Lawrence for what was described as a remarkable success. “This victory is the beginning of what will happen in 2023!” he said.

He said in the coming days, Liberians would begin to see a mass movement of people, both at home and abroad, subscribing to UP, calling it a vessel of honor, with a strong determination to restore Liberia’s lost image.

“Get ready, Liberia will rise again! Let’s celebrate this victory! I am upbeat! “Let’s now go and win Lofa!” are the words of the former Vice President.

The Solicitor General of Liberia, Cllr. Sayma Syrenius Cephus, declared that the State is compelled to drop all criminal charges they had pressed against the ANC political leader, Cummings. He said with the ruling of the Court, no party can presume injury in the matter.

SPEECH: Response to the Opening Address of the Chief Justice