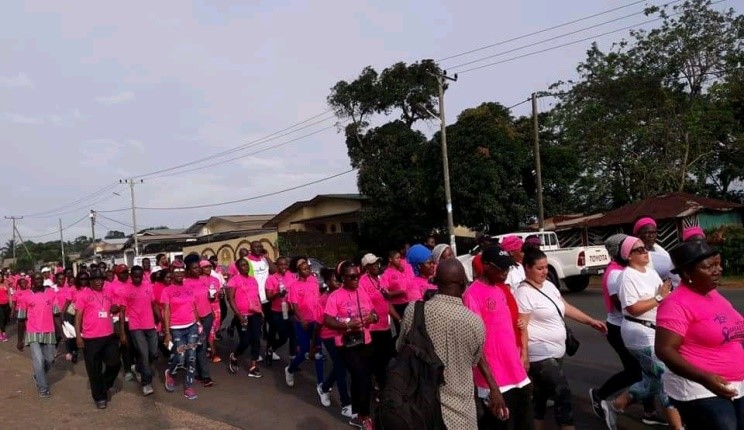 An international organization based in Liberia, Liberia Cancer Resource Initiative INC (LCRI) has intensified its fight against Cancer by conducting a week- long activities in the country in commemoration of this year’s Month of Cancer.

The activities brought together thousands of young women to benefit from a two -day free breasts cancer examination.

The examination was conducted in two counties including Montserrado and Grand Bassa.

Giving the over views of this year month of cancer activities, the Executive Director of the organization noted that the free breast exam was intended to create a major public awareness on cancer’s early detection among other things.

She noted that cancer is a curable illness that can be treated when diagnosed early.

The group Executive Director named some of the signs of breast cancer as painful breasts, breast swearing while calling on both men and women to take advantage of the free examination process.

She pointed out that it is important for institution to get involved in creating awareness due to the many cases of cancers in the country.

As part of this year activities, the Liberia Cancer Resource Initiative staged a walk as a means of creating more awareness on the risks associated with cancer.

The walk brought together thousands of Liberians and residents.

Staffers of the Social Emotional Learning Program which focuses on helping young people deeply understand how cancer can be prevented and its effects were also in attendance.

During the walk funds were raised to be used for treatment of over hundreds of vulnerable Liberian women and girls living with breast cancer in the country.

For her part, the Minister of Health, W. Jallah praised the group for what she called improving the country health sector.

Minister Jallah urged Liberians to see cancer as a dangerous killer that must be prevented at all time.

She however mentioned that the Government of Liberia is working with other local and international institutions ensuring that the country’s health sector is improved.