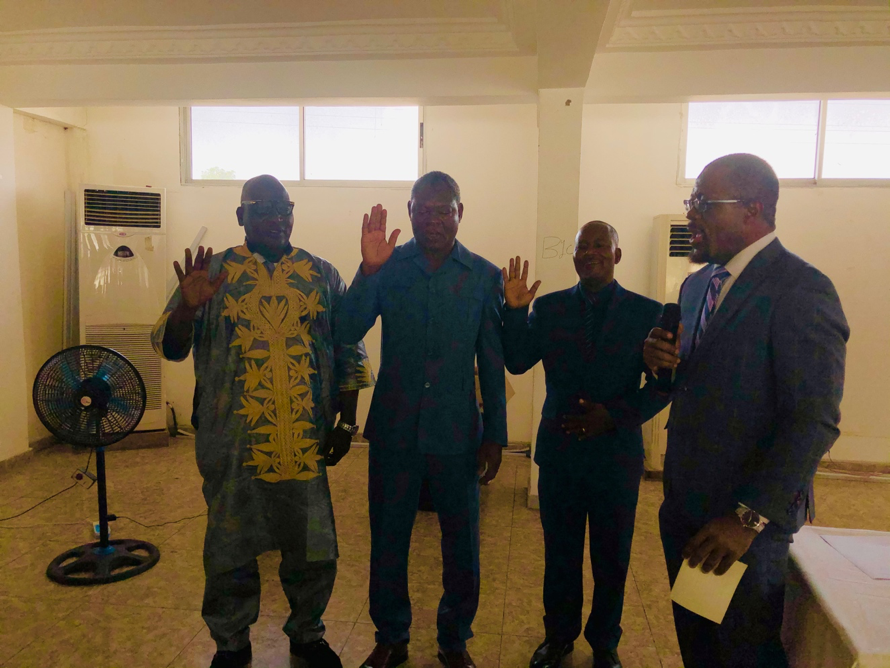 The Publishers Association of Liberia (PAL) has announced that for the first time in the history of Liberia, they will endorse a presidential candidate in 2023 based on their platform and what they think is the appropriate agenda for the country.

The disclosure was made by the President of PAL, Mr. Othello Garblah, at the induction ceremony of PAL on Friday, December 16, 2022, in Sinkor, at 9th Street.

PAL recently conducted its election, at which time Mr. Garblah and other officials were re-elected by members of PAL to stir the affairs of the association.

PAL is a national umbrella organization for newspapers that only publish in print.

Mr. Garblah stated in his inaugural address that for some time in Liberia, the media has stood by why decisions are being made, and there is no time when the media is involved in the country’s political discourse in the sense of choosing which side to be on.

According to him, PAL is consulting with its members about the upcoming 2023 elections, and when they reach a decision, they will endorse a presidential candidate for the first time in 2023.

Mr. Garblah indicated that PAL has been the main guide for social justice, democracy, rule of law, and impunity, and the media is now in a state of confused transition, followed by the Ebola virus and the COVID-19 pandemic.

He stressed that despite the traditional media’s struggle for democracy, it has now enjoyed some measure of relief with the election of Africa’s first female president, Madame Ellen Johnson Sirleaf, followed by the transition of football legend George Weah. However, the traditional media’s economic freedom has remained unattended to due to the outbreak of COVID, which has largely affected the media’s economic survival.

“Apart from that, since the incumbency of President Weah, the Liberian media has somehow lagged behind in its transformation programs after nearly two decades of peace, apparently due to donor-funded projects that were intended to empower the media to become viable to meet present-day realities and challenges, as has been done in other African countries following their respective struggles for democratic governance,” he said.

The PAL President claimed that due to the lack of a strategic program to support the traditional media economically, there appears to be a decline in ethical and professional journalism in Liberia and that there is a huge exodus of professional journalists to pastures other than their own, such as banks, NGOs, the public sector, or state-operated media outlets, due to the lack of improved economic benefits.

He added that most media owners said people are abandoning the independent media (print) because of the harsh economic environment and the need to address issues like staff incentives, huge overhead expenditures including news gathering, electricity, and other media-related supplies.

Mr. Garblah also revealed that the print media in Liberia is yet to benefit from the much publicized international goodwill, emphasizing that the traditional media is a victim of local implementing partners who keep the media in poverty despite millions of dollars in donor funding sent to Liberia for media development and assistance projects.

He continued that in the face of COVID-19 pandemic media, sustainability for ethical journalism is still unattended to, as other important sectors like governance, rule of law, and energy are under restitution by the international community, and the Liberian print media continue to languish in poverty and misery.

He highlighted that the PAL has several plans for 2023, for which they have been in negotiation with Internews through the USAID project, and Internews has been very supportive over time in helping the PAL come up with some programs.

“This year we completed the regulatory framework document for newspapers and journalists across the country to have their newsrooms equipped with data protection (privacy of personal information) for journalists. “Thanks to Internews through its USAID project and the European Union,” he said.

Hon. J. Aloysius Tarlue, Executive Governor of the Central Bank of Liberia (CBL), congratulated the PAL officers in a special installation statement, emphasizing that the peaceful PAL election is a testimony for Liberia entering election year.

Hon. Tarlue admitted that the media has been very helpful to them in terms of disseminating their information and monitoring their policies.

He mentioned that the press has been very helpful to CBL in terms of information dissemination.

He emphasized that in order to give information to the public, you will need the press because they are the buffer between the policymaker and the people.

“If the press is your friend, you will not have too much trouble.” “Once in a while we call and brief them on things, and if there is any news out there, we talk to them about it,” he said.

Hon. Tarlue disclosed that when they took over the CBL at the time, the inflation rate was 31.5%, and today it is about 6.5%. The exchange rate at the time was 211 Liberian dollars to 1 United States dollar, but today it is somewhere between 153 and 156 or 150.

He stated that what they are doing in Liberia is not easy, but it is possible due to the patience of the Liberians.

He noted that they have hired the Liberia Media Democratic Initiative (LMDI), which is doing awareness raising on the new money and sensitizing people in the rural parts of Liberia.

“The work we do at the CBL is technical. We are technicians and not politicians, so in the past the parliament said that before we printed new money we should go there every now and then, but we were able to convince them to give us every three years, so they allow us to print money and in three years’ time we go back to be reapproved. Money is not a political issue; it is a straightforward procedure. “We have a lot of work to do, but we will do it very quietly, and the media is a very important instrument in how we get our message out there,” he said.

The CBL Executive Governor maintained that they need the media and they cannot go without the media because they are the ones that give information to the people in the villages who do not know what is happening in Monrovia.

Meanwhile, he emphasized that social media has become too sensational, and the problem is that the professionals cannot do their job because the sensationalists are on social media, which creates a conflict between the season reporter and those fake news people out there. As such, they will have to make sure to put the regular publishers in place, and that is when the PAL comes in.

“We have to support these people who know how to do fact-checking and who have ethics in reporting, integrity, fairness, and balance in their reportage,” he noted.

He stressed that the media can destroy or build a country if they give bad news to the public and people start to believe it. He said society can be gullible.

He called on others to respect the media, while the media itself should be balanced.

He also called on the officers-elect of PAL to continue to do a good job, while also thanking them for all the support they give to CBL.

Lien Bach, Internews’ Chief of Part, made a special remark congratulating the PAL on a very peaceful election.

Bach said it is very important for the leadership of PAL to start fresh, and moving forward to 2023, there is a big election coming up, and the media plays a very crucial role in the peaceful electoral process. That is why Internews has designed a program to support the media sector.

“We want the PAL to support the election fellowship program of selected journalists from different media institutions to work with them on specialized training on election reporting.” “PAL will support us in organizing that training and mentoring of journalists to report stories on elections,” she said.

“We know that it is so important for responsible coverage of news during elections, so we want reporters to have more skills and knowledge to do that.” We want to help PAL establish a newsstand so that we can have newspapers daily in Monrovia. “We also want to develop a website and an online hub for newspapers in the future, so there are a lot of things we want to do for PAL in 2023 and beyond,” she added.