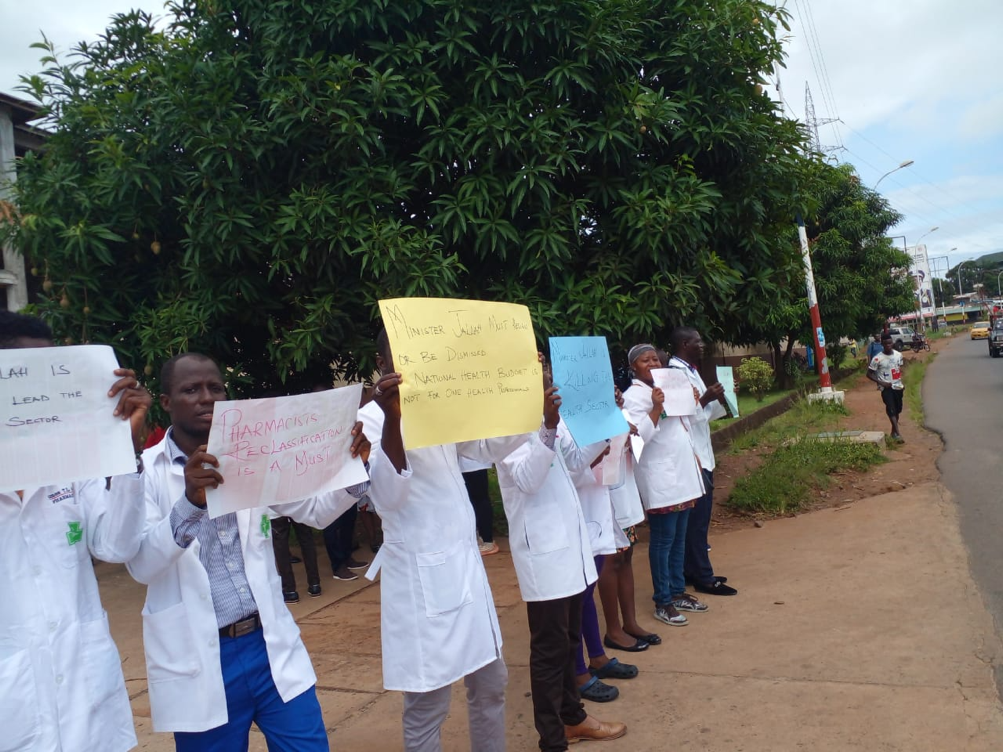 The Pharmaceutical Association of Liberia (PAL) has called on the Minister of Finance and Development Planning, Mr. Samuel Tweah, to keep his promise to reclassify pharmacists in Liberia. On Monday, PAL members were seen protesting for higher salaries and against unfair treatment in the country’s healthcare system.

Following multiple complaints to the appropriate authorities without resolution, the medical professionals gathered on Monday, June 27, 2022, at the Ministry of Health’s headquarters on Tubman Boulevard in the Congo suburbs, brandishing placards and singing slogans. Stakeholders, including the Ministry of Health, the Civil Servants Agency (CSA), and the Ministry of Finance and Development Planning (MFDP), became aware of the strike action and were invited to a meeting in the Health Ministry to discuss it.

According to the group’s spokesperson, Professor George Sorbor, the conference was organized to talk about the significant pay gap between pharmacists and other healthcare workers. The Ministry of Health, Finance, and CSA have agreed to the validation procedure before the reclassification of pharmacists by August 15, 2022, according to Mr. Sorbor, who spoke in an interview after the meeting.

“The disparity of 54% is too great. I have no doubt that we will uphold our end of the bargain and hold them to their word. We will always read this because we desire this as our compensation. We want to close this enormous disparity. Since pharmacists are essential members of the public health team, we are holding them accountable for what they said today and have informed our constituency as such “Sorbor said, professor.

He expressed alarm that pharmacists have been marginalized to the greatest extent, noting that the lowest wage for a pharmacist is $250, whereas the lowest wage for a doctor or general practitioner is, according to him, US $2,500. My colleagues are physicians, while I am a doctor of pharmacy. We have all helped this country’s public health improve. You cannot claim that we are inactive. We have preserved our country.

He continued by noting that despite claims to the contrary, pharmacists have done their part and are making a contribution. He emphasized that they had been disadvantaged and expressed the hope that they will receive prompt redress about the significant compensation disparity. After this, other things will come, he continued.

Dr. George Sorbor was followed by Madam Matilnue Dukuly Fahnbulleh, President of the PAL, who stated that as the group’s leader, she is concerned with the mandate of the people who elected her. She emphasized that salary disparity, housing, and other issues of pharmacists’ welfare need to be addressed, adding that their plight is essential to the development goal of the health sector.

“If you want the health industry to be successful, you cannot divorce pharmacists from it. That is incredibly false. Even in the most usual scenario, if you visit the hospital, have all of your tests completed, and then leave without any medication, that is not a good thing. Because of this, we can affirm that hospital operations are flawless and patient results are excellent “She bemoaned.

For the record, the group will make sure that it receives the intended outcome, according to Dr. Dukuly Fahnbulleh, because they have been corresponding with the Ministry of Finance and Development Planning and nothing has been accomplished to date. She argued that pharmacists are still in high regard, and the group will uphold this position in light of the reclassification.

Due to the stakeholders who attended the meeting, we anticipate receiving reparation. We discussed with them, among other things, the classifications of pharmacists in the nation and their wellbeing. She continued, “I’m telling all pharmacists in and around Liberia to stay alert for your pay; don’t be pleased until you get your reclassified income.

Harvest University gets off to a gloomy start

Liberian journalist launches operation “Give Them a Future”