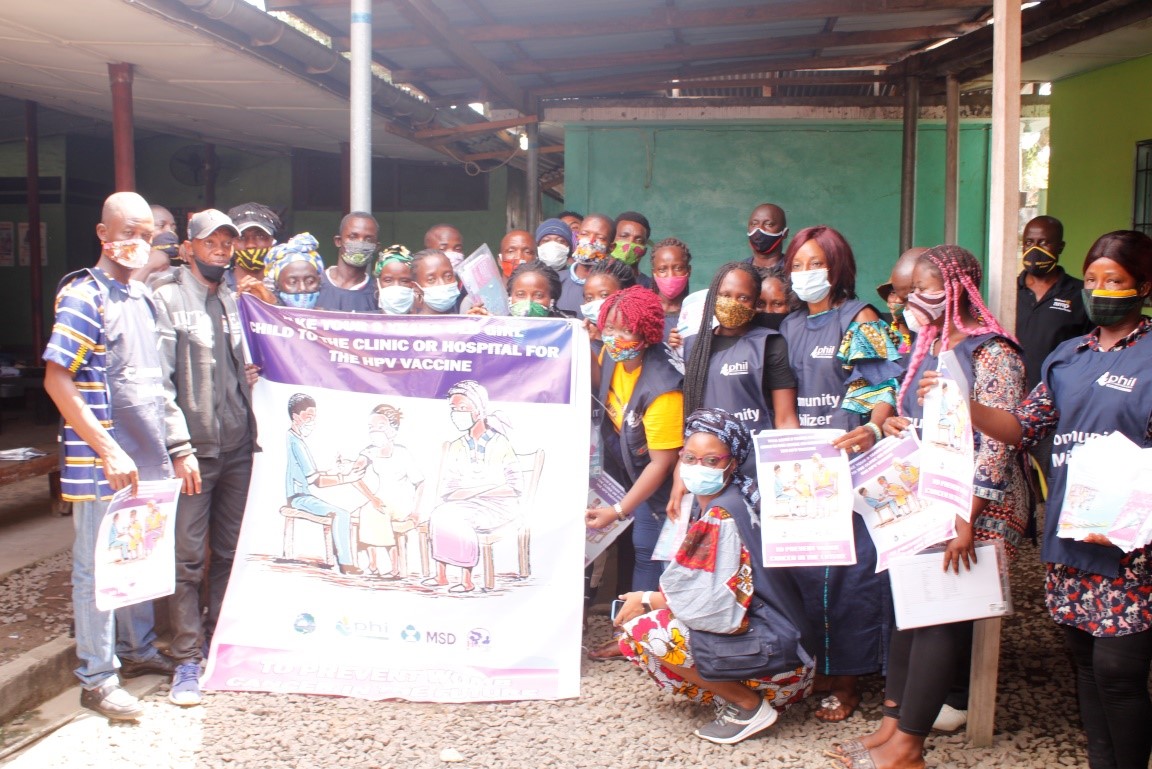 Public Health Initiative Liberia (PHIL) in collaboration with the Ministry of Health’s Expanded Program on Immunization (EPI) has trained and deployed seventy-six (76) community mobilizers in Montserrado to engage and mobilize communities for increased intake of the Human Papilloma’s Virus (HPV) vaccine to prevent cervical cancer.

The seventy-six community mobilizers will cover the seven (7) health districts of Montserrado with in a period of four days. Those assigned in Todee and Careysburg health districts were trained on Friday, October 23, 2020 and deployed on Saturday, October 24, 2020. They will remain in engaged with communities in the districts until Tuesday, October 27, 2020.

The second group of community mobilizers was trained on Saturday October 24, 2020 and will cover the remaining five districts that includes, Bushrod Island, Central Monrovia, Common Wealth, St. Paul and Somalia Drive health districts. They were deployed on Sunday, October 25, 2020, and will climax their engagement on Wednesday, October 28, 2020.

The exercise is made possible through funding from MERCK &Co, an American Multinational Pharmaceutical company also known as Merck Sharp & Dohme (MSD), for the conduct of social mobilization to increase the demand for the HPV Vaccine for prevention of Cervical Cancer.

PHIL in fulfillment of the partnership is carrying out the social mobilization and community engagement exercises to increase the demand for the HPV vaccine in the country.

Cervical Cancer is caused by the Human Papillomavirus which is the leading cause of cancer found in Liberian women between the ages of 15 to 45-years. Studies found that there are over 100 types of HPV, with at least 14 known to cause cancer. According to WHO, types 16 and 18 are mostly responsible for 70percent of cervical cancer cases in the world.

In November 2019, the government of Liberia through the Ministry of Health’s Expanded Program on Immunization with support from Gavi, the Vaccine Alliance launched the HPV Vaccine as part of the routine immunization services for girls at the age of 9 to prevent Cervical Cancer.

Given that HPV is a sexually transmitted infection, the vaccine is highly effective when administered to children. Currently, the government is prioritizing girls that are nine-years-old.

The vaccine is available at all public health facilities in the 15 counties and is being administered twice, one after every six months for girls at the age of nine.

The shutdown of schools the fear of visiting health facilities because of COVID-19 among Liberians has affected the demand generation activities around this vaccine.

PHIL Executive Director Joyce L. Kilikpo told the community mobilizers at the close of their training on Saturday that increasing the number of girls being vaccinated against cervical cancer was at the heart of her organization.

“We want to protect the next generation of Liberian women from being affected with cervical cancer because as it is, too many women in Liberia have suffered and died as the result of this cancer,” Madam Kilikpo said.

She encouraged the health mobilizers to be passionate about the engagement and encouraged communities to open their doors and welcome the mobilizers.