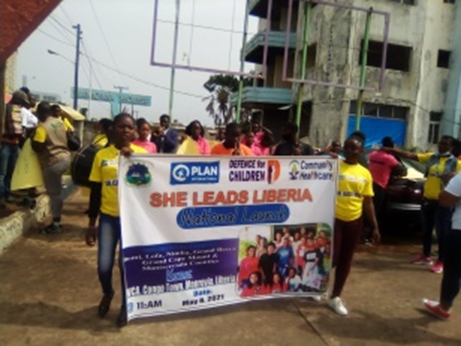 The launch of the jointly initiated “She Leads Liberia Project” has taken place in Liberia.

Plan International Liberia, Defense for Children International (DCI), Liberia and Community Healthcare Initiative (CHI) jointly launched the project Thursday, commencing with a parade from the Vamoma House in the Airfield Community, Sinkor,  on to the Young Women Christian  Association (YWCA) building located in Congo Town, where indoor activities of the launch was held.

The parade was graced by students of several institutions, civil society organizations, women organizations, and youth groups, as well as international organizations and officials of the Liberian government, among others.

Giving the overview of the “She Leads Liberia Project”, Madam Benitha  Dehfer, National Coordinator of the project, said  the project is a strategic partnership between three organizations that she said are implementing  the program.

She named two international organizations; Plan International Liberia and Defence for Children International (DCI) Liberia, along with their local partner the Community Healthcare Initiative (CHI), as the three groups jointly implementing the project.

Madam Dehfer said the program has a five-year span and is geared towards bringing child rights organizations and feminist groupings together aimed at ensuring that voices of women are heard, and as well as to increase the perspective of women’s participation in all decision making in Liberia and other countries around the globe.

Additionally, the National Coordinator said the “She Leads Program” is being implemented in nine countries, adding that in West Africa, countries implanting the project include Liberia, Sierra Leone and Mali.

In East Africa, she disclosed that three countries are implementing the project, naming Uganda, Kenya Ethiopia; while in the Middle East, Madam Dehfer named Jordan and Lebanon.

She further disclosed that in Liberia, the program will included girls’ organizations and other youth organizations that will be incorporated as a mean of achieving the objective of the project.

She told the gathering that the project in Liberia will be implemented in six counties, including Montserrado, Grand Bassa, Nimba, Bomi, Grand Cape Mount and Lofa.

Performing the official launching exercise was Montserrado County electoral district #4 Representative, Madam Rustonlyn Suacoco Dennis, who used the occasion to admonished young girls to be focused and determined in whatever they perceived as positive venture.

She said the success of any young person depends on the thinking capacity of such individual to see beyond and not to be static in their vision of moving forward especially in leadership.

Rep Dennis further urged young females to develop the culture of reading and speaking eloquently, stressing that it is one of the powers for any female to compete with their male counterparts.

According to the Montserrado female lawmaker, once a female has the ability to push logic with eloquence, such person gets elevated and is treated with dignity and respect by their counterparts.

She then committed herself to supporting the “She Leads Project.”

She told her audience organizers of the launch were pleased with the role the young people played in administering the official launch of the program.

Madam Solanke said for the five years period the project will span, organizers of the program will be mentoring young people and working with them to ensure that the project is a success in Liberia.

For His part the Executive Director for Defence for Children Liberia, Foday Kawah said the most developed countries in the world are those countries that give equal rights and opportunity to girls and young women.

Acting Country Director of Plan International Liberia, Miriam Murray, for her part, urged those she referred to as promising leaders to cultivate the leadership ability of listening and not being arrogant.

Madam Murray said a leader has a responsibility that needs to be implemented fully to the best of such person’s leadership ability by accepting the views of those around such a person on issues of relevance.

She reminded women that as they move on with a new vision in the direction of leadership, they should reflect on the challenges that women are faced with and focus on the positives among others.