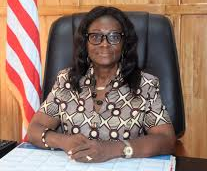 MONROVIA – The Chairperson of the National Elections Commission, Madam Davidetta Browne-Lansanah has officially declared opened the 2020 political campaign for the special senatorial and representative by-elections slated for Montserrad District #9 and Sinoe District #2 respectively. The elections are scheduled to be held next month.

Madam Lansanah, at a NEC press conference Wednesday, announced that the political campaign will run from November 18, 2020 and ends 24 hours before polling day, putting it at midnight on 6 December.

The NEC boss further announced that a total of 134 candidates have been qualified by the Commission for both elections.

“I wish to call on all candidates and their supporters to go about their campaign activities in a peaceful manner. Please avoid rancor and bitter exchanges, she emphasized.

The NEC chairperson stressed that the electoral body takes seriously the submission of campaign schedules by all political party and independent candidates as per the campaign requirements issued to all aspirants during the candidates’ nomination period.

She stressed the need for candidates contesting the senatorial and representative elections to conduct their campaign activities peacefully and avoid electoral violence during and after the campaign process.

She maintained that a violence free electoral process is critical to ensuring that Liberians protect the fragile peace and stability of the country.

Lansanah further instructed that candidates of political parties as well as independent candidates to present campaign schedules to the NEC so as to prevent the situation where two opposing political party candidates would be campaigning on the same day and at the same venue.

She explained that NEC will prioritize candidates of political parties as well as independent candidates who will be the first to present their campaign activities and schedules to the office of the NEC, noting that two campaign rallies will not be allowed on the same day.

According to her, every candidate should carry out their campaign activities in a peaceful manner and avoid the use of inciting words against each other, noting that they all should exhibit mutual respect at all times.

Additionally, the NEC calls on all candidates and their supporters to observe all public health regulations instituted by the Government through the Ministry of Health and the National Public Health Institution.

Amid dwindling economy, COVID-19: Lawmakers begin chopping another US$15k, but…