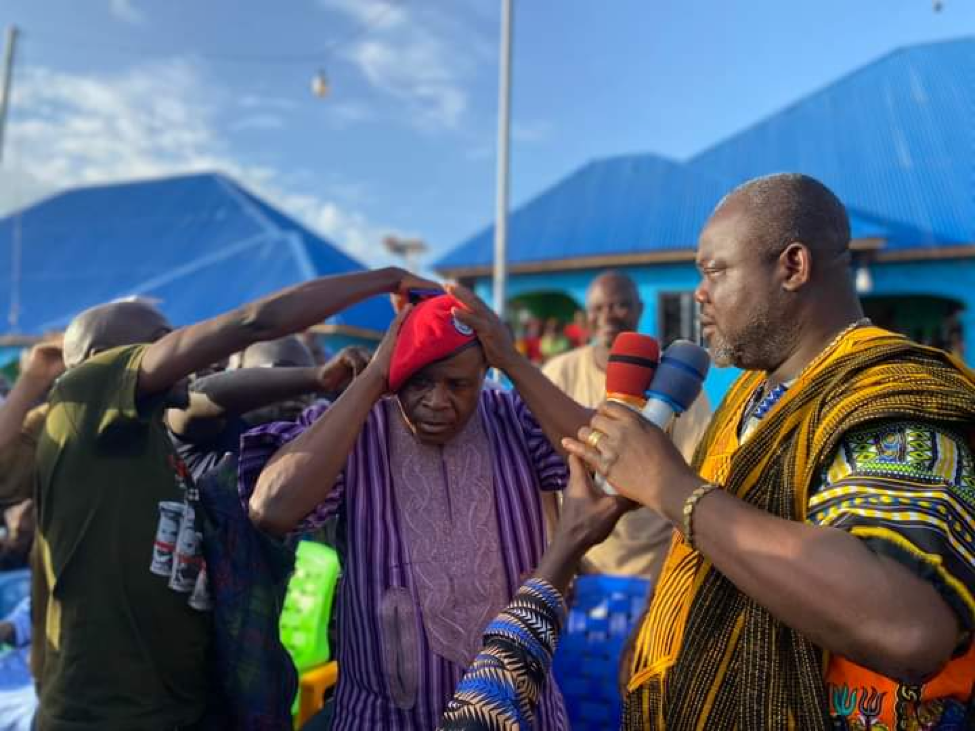 The National Election Commission (NEC) has declared Councilor Joseph K. Jallah as winner of recently concluded Lofa County by-election. The ruling Coalition for Democratic Change (CDC) generously sponsored Cllr. Jallah, who campaigned as an independent candidate. Following the formal announcement of his victory, Cllr. Jallah joined the CDC in Foya, Lofa County. The by-election was required because Brownie Samukai, the senator-elect at the time, was unable to assume office because of a court decision that found him and two other people guilty of corruption and other offenses.

Galapkai Kortimai, a previous candidate for the ruling Unity Party (UP), came in second place, but Jallah narrowly defeated him. Jallah received 36.6 percent of the vote, followed by Kortimai with 35.15 percent, according to the national Election Commission.

Cllr. Jallah has received congratulations from three different people, including two candidates who ran in the election (Momo Cyrus and Mariamu Fofana) and a significant opposition figure (Sen. Darius Dillon).

Many people are of the opinion that it is a form of gratitude to the CDC for all of their help. Instead of running a candidate of their own, the party in power chose to throw their support behind Cllr. Jallah’s campaign, and he ended up winning the election.

Meanwhile, to address the growing development deficit brought on by Lofa County’s protracted underrepresentation in the National Legislature, the Better Future Foundation (BFF) called for the immediate and appropriate induction of Cllr. James K. Jallah, who has been named the NEC’s declared Lofa County Senator-elect.

The speedy induction of the Lofa County Senator-elect cannot be stressed enough, according to BFF, who also commended all senatorial candidates, state security personnel, and the county’s peace-loving residents for their classic display of high political maturity that resulted in the peaceful conduct of the June 28, 2022 by-election.

The Liberian State, specifically the House of Senate and the Lofa County Legislature, have been functionally handicapped for a protracted period of one year and seven months, according to BFF, due to the political impasse surrounding the Special Senatorial Elections (SSE), which were previously held in December 2020, and the inaction of the Government of Liberia (GOL).

In a statement released in Monrovia yesterday, BFF stated that such a historically low level of national representation in the Upper House of the Liberian Legislature was not only unthinkably illegal and in violation of Article 37 of the Liberian Constitution, but also had a detrimental effect on the socio-economic and political well-being of the Lofa people as well as the constitutional operation of the National Legislature.

BFF added that this represents a “huge socioeconomic and political development vacuum” and a “unfortunate situation” that will force the newly elected Senator to triple his legislative responsibilities upon taking office, including “Representation, Lawmaking, and Oversight” with the goal of advancing the local and broader development agenda.

According to BFF, Liberia must now make every effort to ratify uncertainties in the implementation of its laws since it is a post-conflict nation that has, with the assistance of the international community, completed a protracted process of constitutional law reform.

BFF further argued that such action would stop what appears to be an intentional and unprecedented underrepresentation of any of the country’s political subdivisions in the Liberian Legislature, which was a serious violation of Article 37 of the Liberian Constitution.

Therefore, the civil society advocacy group requests that the Government of Liberia (GOL) compensate Lofa County for the political, socioeconomic, and development deficits that were regrettably inflicted on its population during the county’s underrepresentation in the National Legislature for the periods of one year and seven months, which had a negative impact on the county’s reconstruction, politics, and socioeconomic development.

Although there were reports of several voting centers and precincts having noticeably low voter turnout, according to BFF, the electorate’s dedication to the NEC’s mandated election standards and procedures was typically not only praiseworthy but also worthy of imitation.

Likewise, BFF reaffirmed its demand that the National Elections Commission (NEC) swiftly look into any allegations of electoral irregularities that may have surfaced from the polls and take the necessary corrective actions to guarantee that the results of the Lofa by-election on June 28 adhere to acceptable international standards.

According to the BFF, in order to reduce the escalating protests by political parties and independent candidates over election results and alleged irregularities over time, Liberia as a nation must start implementing the necessary mechanisms to ensure that national elections adhere to the minimum acceptable global benchmarks and standards, including fairness, credibility, and transparency.

BFF emphasized that in order for voters to be able to make informed decisions both now and in the future, the Liberian government must have the strong, deliberate, and necessary political will to make timely and adequate budgetary appropriations and to provide other necessary logistical and technical support.

According to the BFF statement, the main causes of electoral disputes in Liberia throughout the years have included violence, political retaliation, fraud, a severe lack of civic and voter education, inadequate training of poll officials, among other things.

The civil society advocacy group claims that any disagreements over election results are not only alarming and troubling but also leave a lot to be desired in terms of preserving and consolidating Liberia’s fragile democracy and hard-won peace.

At the same time, the advocacy group advised lost candidates to graciously and responsibly accept loss.

The CSO group emphasized that “the credibility and validation of elections are largely dependent on defeated candidates’ ability and sincerity to concede by calling to congratulate officially declared winners as opposed to raising face-saving and unjustified claims and protests to cause unnecessary tension and acrimony which have the potential to adversely affect national peace and regional security.”

BFF, a civil society organization (CSO), non-state player, and supporter of ECOWAS regional integration located in Liberia, is committed to advancing peace as well as the post-war development of Liberia.

“Desist from Romanticizing the Genuine Challenges We Face”