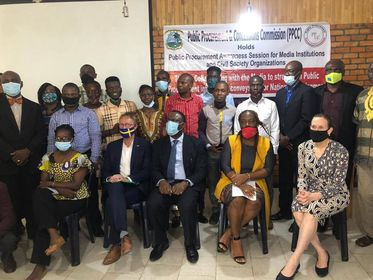 The Public Procurement and Concession Commission (PPCC) has concluded a one day intensive public procurement awareness engagement with the media and civil society organizations in the country.

The event brought together journalists from various media and CSO groups from across Montserrado County.

During  the event,  the participants  drilled on the various activities  of the PPCC that include bidding process ,  building synergies among others with  the media and civil  society  groups  to enhance national development.

Speaking  during the event,  the Chief  Executive Officer  of the Public Procurement and Concession  Commission,  Atty. Jargbe Roseline  Nagbe-Kowo,   said  the interaction  was a commencement  of future  engagements  with the media and  the civil society organizations .

She  said  the objective of the media and CSOS Engagement  was also to provide  those two vital professorial sectors  the opportunity  to acquire  those relevant  knowledge as it relates to the operations of PPCC.

It was also intended to provide information bordering on enhancing transparency,  accountability, and integrity  in the government’s procurement sector.

Atty.  Nagbe-Kowo    added that the forum further sought to build a robust public awareness and education about the procurement and reform processes.

She further said professionals at the PPCC are working with an open system that focuses on transparency and integrity.

The PPCC Boss said  the capacity building  for  the media  and the CSOS   will  prepare  them  to report factual stories   from an informed background relating  to the workings  of the commission.

Speaking further at the end of the training, Atty. Nagbe-Kowo    extolled the media and the CSOS  for  their wiliness and commitment  in partnering  with the PPCC.

She further disclosed that the PPCC will decentralize the media and CSOS Awareness Engagement in the rural parts of the country.