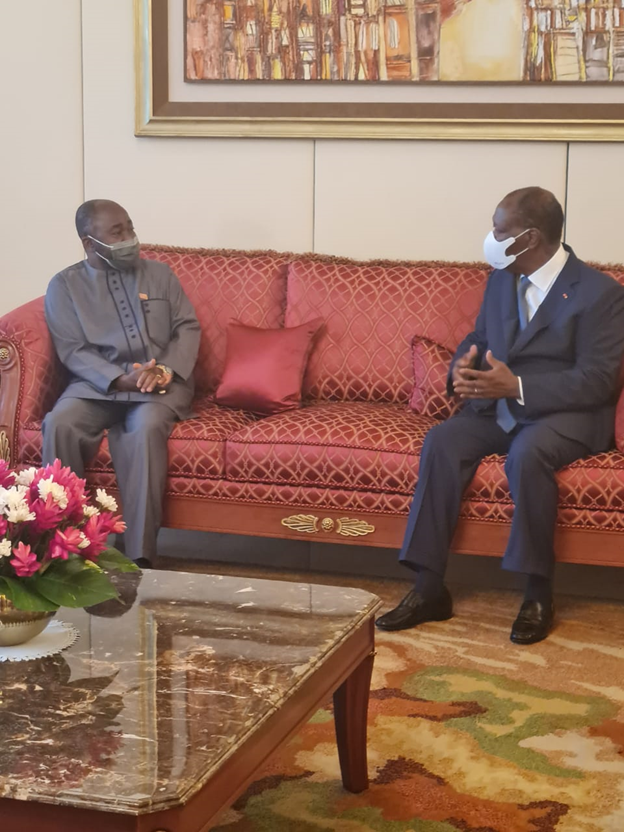 Liberia’s Foreign Minister Dee Maxwell Saah Kemayah, Sr, says Liberia is a trusted friend and reliable partner to the Republic of Côte d’Ivoire, adding Liberia will never allow an inch of its territory to be used to destabilize any of its neighboring Countries particularly the Republic of Cote d’Ivoire.

Minister Kemayah made the statement Monday May 10, 2021 when he led a high level special presidential delegation to meet with President Alassane Ouattara of Côte d’Ivoire, at the Presidential Palace in Abidjan, in the presence of top Ivorian government officials,

During the meeting, Minister Kemayah used the occasion to present a special message enclosed in a communication from President George Manneh Weah to his Ivorian counterpart President Alassane Ouattara

While receiving the Message, President Alassane Ouattara expressed deep gratitude to Foreign Minister Kemayah and members of his delegation for the visit and a solidarity expressed, and at the same time, conveyed warm and brotherly greetings to his Liberian counterpart, H.E. George Manneh Weah, adding that both nations have enjoyed a long-standing regional friendship; increasingly deepened cooperation at the level of the Mano River Union.

President Ouattara told the Liberian delegation that the bilateral relations enjoy by the two countries would further be described as a model of Cote d’Ivoire-Liberia friendship.

President Weah’s, in the Special Message to President Ouattara, indicated that both countries have enjoyed a historic and longstanding friendship.

In the message, President Weah expressed deep regrets over the recent attacks on the Military Base in Abobo which allegedly involved some Liberian citizens living within neighboring Cote d’Ivoire.

He reiterated that the government of Liberia will forever remain committed to ensuring that no inch of its territory is used as a Launchpad for insurrection in the Mano River Union Basin.

Briefing the Ivorian authorities on the security situation in the region, Minister Kemayah disclosed that two countries have agreed to create a joint technical surveillance team to patrol the borders of both countries.

He reassured the Government of Cote d’Ivoire that Ivoirians living in Liberia will continue to enjoy freedom of movement in the country at all times, without any form of harassment from both the Liberian authorities and its citizens.

“Liberia is working towards strengthening relations between the two countries, Liberians living in Côte d’Ivoire must be peaceful and should not come in conflict with the Ivoirian law and must be law abiding residence.

Minister Kemayah then lauded President Ouattara for ordering the released of the fourteen Liberians that were arrested for their alleged involvement in the recent attacked on the Abobo Military Base on the night of April 20, 2021.

Minister Kemayah, extended profoundest appreciation to the Ivorian government for the high level of cordiality accorded to the special Presidential delegation dispatched by President Weah, to Cote d’Ivoire.  Meanwhile, the remaining two Liberians arrested and detained in Bouna, the north-eastern part of Cote d’Ivoire, in connection with the N’dortre attack, were on Monday brought to Abidjan and later released, following an intense diplomatic negotiation between the Special Presidential Delegation, headed by Foreign Minister Dee Maxwell Saah Kemayah and the Ivorian Authorities.

“World Safer Because of UN”

“Recall Them Where Applicable”