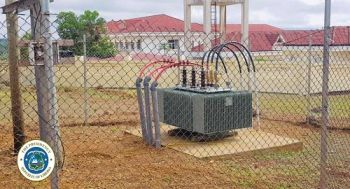 President George Manneh Weah Friday, February 19, 2020 concluded nearly a four-day interactive tour and highly restless time in the northern province of Nimba, punctuating the visit with donations and pledges for the second largest referral public hospital in the country, according to the Executive Mansion.

Before departing Tappita, where the president and delegation spent a day and half, he paid a walk-through visit to the Jackson F. Doe medical facility named after one of the county’s venerated personalities, Jackson F. Doe, not only to acquaint himself with their operations but to also give them reasons to celebrate.

Now the administration and staff of that Hospital have every reason to sing songs of praises to God for inspiring the President of the Republic, H.E. Dr. George Manneh Weah, to look in their direction during his stay in Tappita.

In a brief ceremony, the President thanked the administration and staff of the Hospital for the tremendous contributions they continue to make to save lives and donated two ambulances for improve critical patients’ access to the hospital and other referral purposes.

The Liberian leader said he was impressed with what he had seen at the hospital, describing it as real manifestation of teamwork, commitment and dedication to duty.

President Weah had earlier dedicated a new dental clinic at the Hospital, minutes after performing similar task for a newly constructed 1500KWA transformer that will be used to stabilize supply of electricity to the Hospital.

The JFK administration thanked the President for visiting them and making relieving donations.

The JFD hospital also sought President’s intervention to ease other constraints they are faced with, including logistics and accommodations for the growing workforce.

Shortly before departing Tappita, the President and the residents of the community came face to face in a town hall meeting.

The Liberian President used the occasion to laud the people of Nimba, the second most populated county of Liberia, for voting him into office.

He stressed: “Instead of you thanking me, I should be thanking you for reposing your confidence in me to lead this country.”

The Liberian Chief Executive particularly praised the people of Nimba for defying all odds, the vilification he endured during the 2017 elections that he did not have the wherewithal to lead the country, yet the people placed their trust in him.

“You did not make a mistake for voting me into office,” President Weah said, emphasizing also that he and the government are exerting all efforts to justify the Nimba people’s vote.

“My mission is to help you succeed, to promote and make you achieve your wishes and aspirations, promote human rights, enhance democracy and develop this country. Your confidence is not misplaced; you have made the right choice and I continue to endeavor so that you have a place to boast,”  the Liberian Leader noted.

He urged Tappita residents to work for peace and tranquility if the country is to achieve growth, and if they do not want the country thrive on the concept of individualism but on the principle of holism.

President Weah assured Tappita citizens of Government’s unflinching support to ensuring that they realize their collective and individual desires for economic empowerment through provision of micro-loan, announcing that the government has secured huge sum of money to support farmers and other business ventures.

Responding to citizens’ request to complete their city hall, President Weah said he would ensure the completion of the facility “if that is the wish and desire of the citizens.”

Tappita citizens presented sundry of gifts to President Weah and gowned him in appreciation of what they termed “charismatic leadership ability and unprecedented development initiatives across the country.” Meanwhile, the Liberian Leader has departed Nimba County for neighboring Grand Gedeh County in continuation of his county tour which takes him to six different counties including Bong, Nimba, Grand Gedeh, River Gee, Maryland and Grand Kru.