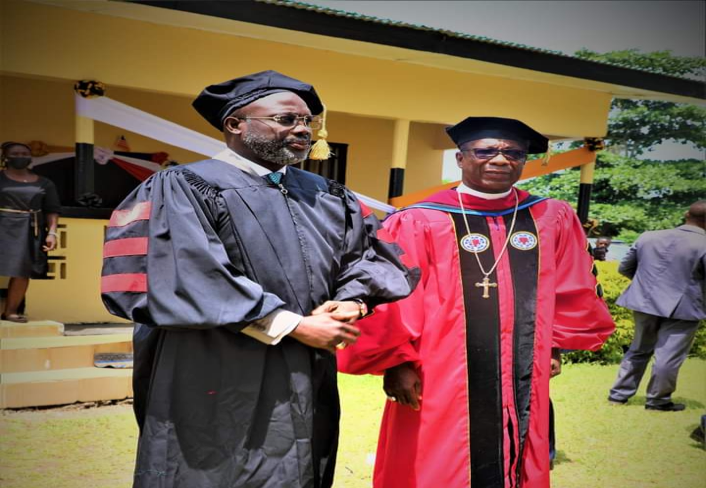 President Weah expressed his joy at the graduates’ unshakable commitment and perseverance during their studies, which he said laid the road for their accomplishment.

The President also encouraged the graduates to dream big dreams, but not to make dreams their masters, when he delivered the Convocation Oration at AMEZU’s 31st graduation ceremony in Vincent Town, Bomi County, on Thursday, June 9, 2022. The Commencement Speaker urged graduates to pursue their dreams.

graduates to awaken from their dreamy slumber and work on real-world goals. Many dreams do not come true without hard effort, difficulty, and sacrifice, according to the Commencement Speaker.

“I want you to understand, graduates, that failure is an important component of achievement. Failure offers you a lesson that you must be willing to learn, and you will only gain from your failure if you learn it “Dr. Weah went on to say more.

President Weah, a well-known athlete, warned the graduates that they would face challenges in the future, but that they should remain focused and persevere.

“There were numerous failures along the way in my profession,” he said. For example, I was benched numerous times in the early stages of my soccer career before becoming a regular starter.”

As a result, President Weah advised the young graduates to learn from whatever missteps or mistakes they may have made and to seize every opportunity to make a good change.

“And you are all know that in my political career, I ran for President twice and was denied, but I did not give up,” the President continued. When I didn’t make it, I took stock of my journey and returned to where I’d left my dream, recalibrated, and proceeded on my way. I eventually used what I’d learned to create a winning formula. And now here we are.”

The Liberian President expressed his delight that, despite starting from the bottom, the graduates have made remarkable progress to get to where they are now.

Graduating from the AMEZU, which he defined as a prestigious college of higher learning, has given them the opportunity to gain various skills and a vast knowledge base, giving them a competitive advantage over those who are not so lucky.

President Weah also cautioned them that if they rested on their laurels and waited for victory to come to them, they would be disappointed.

“In my experience, success comes to those who are determined and disciplined enough to put in the effort to make it happen after proper preparation.”

“If you have helped a member of today’s graduating class reach to this point in their matriculation, then today’s celebration is also about you,” the President stated of the graduates’ parents and supporters.

In a parallel ceremony, President Weah demonstrated his generosity and kindness by covering the graduation fees for AMEZU graduates.

The long Commencement Hall was filled with cheers that never stopped when the AMEZU Administration made the announcement.

“George Weah! George Weah!” shouted the graduates, parents, and well-wishers as they danced and raced in all directions.

This is President Weah’s second time assisting graduates with their graduation costs. The first time was with recent Adventist University of West Africa graduates.

People with disability in focus

Educate HER: Promoting Gender Equity and Equality in Education