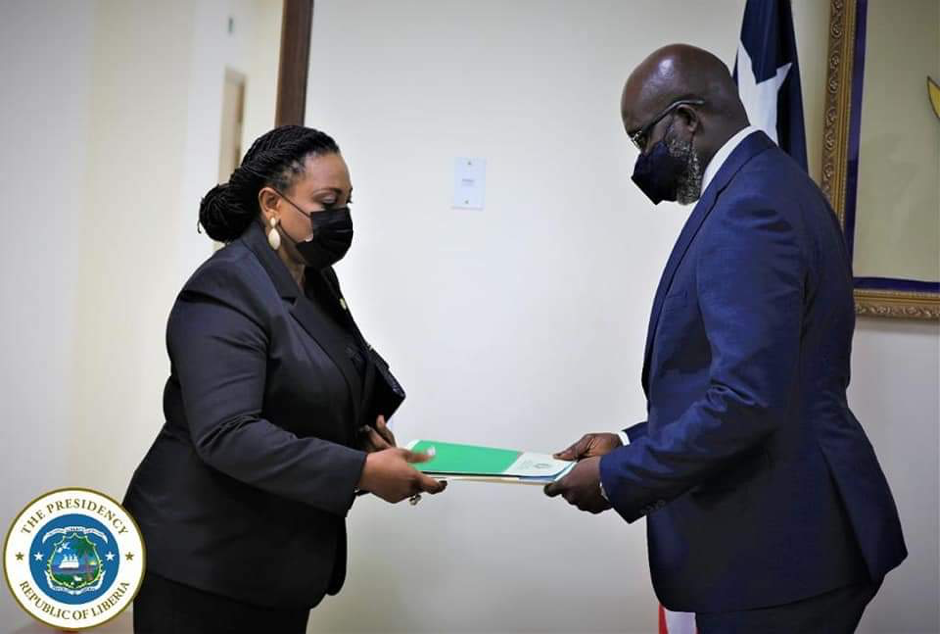 The President of the Republic, Dr. George Manneh Weah, has received letters of credence from the ECOWAS Commission, as well as the Ambassadors Extraordinary and Plenipotentiaries of South Africa, The Gambia, and the Czech Republic.

On Tuesday, May 17, 2022, President Weah received the ambassadors separately at the Executive Mansion and assured them of his government’s commitment to sustaining and enhancing Liberia’s bilateral connections with their respective countries and entities.

First, President Obama greeted South African Ambassador M. Igbal Jhazbhay. The President emphasized the strong ties that exist between the two countries, saying that Liberia is satisfied with how things have progressed since diplomatic ties were established in 1997, as indicated by the inauguration of embassies in their respective major cities: Pretoria and Monrovia.

Liberia’s president assured the incoming South African envoy of his country’s and the international community’s commitment to promoting peace and security in Africa and the rest of the globe.

During Ambassador Jhazhbay’s tour of duty in Liberia, he expressed optimism that the two countries will explore many more paths in the spirit of South-South Cooperation.

In a quick answer, the new South African Envoy thanked the Liberian President for the warm welcome, while expressing hope that when the two countries meet during the AFCON qualification, the best team will win. Liberia is in a group with South Africa.

President Weah also received a letter of credence from Mr. Alieu Jammeh, Ambassador Extraordinary and Plenipotentiary of the Republic of The Gambia, and discussed how far the two nations’ diplomatic ties have progressed.

“Let me express my delight with the strong ties and cordial relationship that exist between Liberia and The Gambia,” President Ellen Johnson Sirleaf said, adding that his government will continue to cultivate closer relationships and bonds of friendship between the two countries and their peoples.

President Weah wooed the Gambia’s government to investigate investment opportunities in Liberia, particularly in tourism, trade, and agriculture, and expressed hope that Ambassador Jammeh’s appointment would rekindle a desire to work together to develop bilateral ties.

The incoming Gambian Ambassador responded by thanking the President for inviting him over and for his warm words.

President Weah welcomed the Ambassador of the Czech Republic, Mr. Jan Furry, and reflected on Liberia-Czech bilateral cooperation since 1998, noting how the two countries worked closely on national and international concerns.

“I would like to welcome you on behalf of the Liberian people and in my own name,” Dr. Weah remarked. Liberia and the Czech Republic established diplomatic ties in 1998, as you are probably aware.

The President also expressed his government’s willingness to enhance and intensify the two nations’ current bilateral cooperation, with a particular focus on education, health, agriculture, and human resource development at all levels.

“Since taking office as President, my administration has concentrated on fostering a favorable environment for FDI and business in general.” In this context, we warmly welcome Czech investments in Liberia, particularly in the sectors of transportation, health, agriculture, mining, education, and youth empowerment.

During the civil war, the President recalled the Czech Republic’s aid to Liberia in power generation, police training, and the attachment of Czech security officers to the UN Mission in Liberia.

He also expressed his government’s desire to work with the new envoy to improve bilateral relations between the two countries.

Mrs. Josephine Nkrumah, the newly appointed head of the ECOWAS Mission in Liberia, was also received by President Weah, who expressed gratitude to the Commission for her choice and the confidence it placed in his leadership, as well as the ongoing interest demonstrated in Liberia.

He emphasized the importance of ECOWAS in the restoration of peace in Liberia, while also reiterating Liberia’s zero tolerance for military forces in the sub-region removing democratically elected governments without due process.