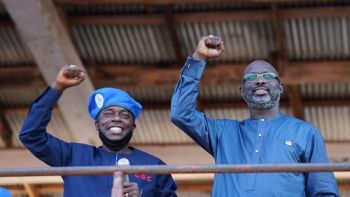 He said there could be reprimands for partisans who float and undermine the election of party candidates who were duly, collectively chosen to contest political offices.

President Weah noted that party-discipline requires that partisans feel ideologically duty-bound to support the government and its agenda and by extension vote candidates on its ticket.

Speaking Tuesday, December 1, 2020 at the campaign rally of  Senator Henry Yallah in Gbarnga, Bong County,  the CDC Leader bemoaned acts of betrayal of the party’s ideals and decision by some partisans, something he said is suicidal and self-defeating.

“I want you to know that whether you are in the National Patriotic Party or other constituent party of the Coalition, we have chosen candidates, including that of Bong County, for the midterm senatorial elections. We did so transparently and freely. And we are under obligation to vote for them.”

“In politics or other establishments, people will always have diverse views on issues, but it is important to submit to and heed general consensus and not allow personal interest override the generality of views and the common interest,” President Weah said.

The CDC first partisan made it clear that the CDC will not stand in the way of someone who may want to leave, but such a decision should be guided and done peacefully.

He rallied partisans, supporters and well-wishers of the Coalition for Democratic Change to put their weight behind Senator Henry Yallah and ensure he is re-elected to the Senate to advance the programs and policies of the Government.

Dr. Weah said having more CDC senators serve in Government makes it easier for him as the President to have his legislative agenda, which is development oriented, consummated and passed timely and seamlessly in the National Legislature.

“Senator Yallah and I worked together in the Senate when I was there. He is a good and respectful gentleman. I want you to ensure that we re-elect him on December 8,” the CDC First Partisan urged the people of Bong County.

President Weah also used the time to promote “Yes” vote for all propositions of the Referendum, stressing that it’s good for the country and the children who are being denied the right to citizenship.

He explained that Liberia stands a better chance to reap politically, socially and economically from granting citizenship to thousands of citizens in the Diaspora, most of who are disciplined in different fields of life and want to contribute their expertise to the growth of Liberia.

In remarks, Senator Jallah praised President Weah for demonstrating true and selfless leadership which shows that he is truly a man of peace.

“Mr President, some of us did not support you when you vied for the presidential office, but you don’t mind and you are going all out working with us. It shows you are a good leader and man of peace,” Senator Yallah asserted.