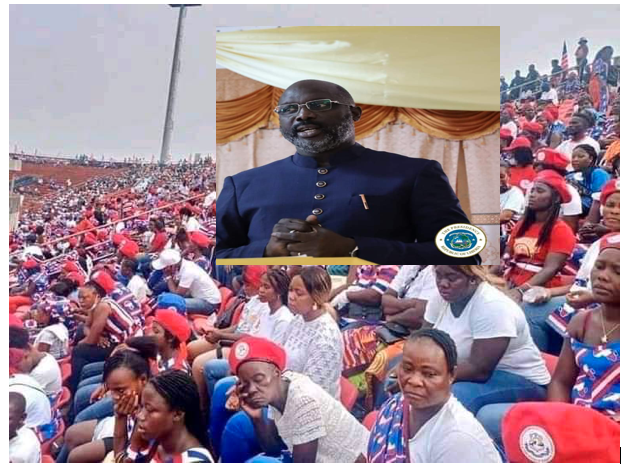 The official theme of Liberia’s Bicentennial (the land of return, 1822–2022) is “National Unity and Reconciliation,” which celebrates 200 years of freedom and pan-African leadership.

President Weah highlighted in his bicentennial message that national unity and reconciliation are the pillars on which the New Liberia must be built.

President Weah stated that unity and reconciliation should be at the forefront of all current and future national development plans, including projects and programs aimed at eradicating all forms of prejudice and exclusion in Liberia.

He also vowed that his government would focus on promoting unity amongst all Liberians, wherever they may reside therefore encouraging all to make meaningful contributions to the nation-building tasks of the country.

“Redefining Liberia’s identity and building a shared sense of nationalism should be at the center of continued reconciliation in Liberia. The model for genuine National Unity and Reconciliation in Liberia is inspired and founded on positive cultural values, citizenship building, good governance, economic empowerment, and the rule of law,” President Weah noted.

He further told Liberians to continue to embrace the tenets of National Unity towards becoming a reconciled and democratic nation, whose citizens are at peace with themselves, their neighbors, and the world.

However, some Liberians have expressed different opinions on the President’s bicentennial message.

Ms. Mariam Johnson of WestPoint, speaking to Womenvoices, said she respects the President’s call for reconciliation but wonders what mechanism he plans to employ to bring Liberians together. She believes that the greatest approach to achieve reconciliation is for the government to ensure that the country’s resources are distributed fairly.

Reconciliation is good for me, but how is that possible when only those in power and their friends are pleased, while the rest of us are still waiting for our turn? She wonders when we’ll be able to truly reconcile.

Mr. Robert Zlantan Ibrahimovic commended President Weah for honoring Liberia’s 200 years of existence and bringing the art and culture of Liberia forth for demonstration so that the new generation and citizens lacking knowledge of Liberia’s history could appreciate them.

According to Robert, at the launch of the bicentennial, President Weah’s message about reconciliation and peace is welcoming. Therefore, he (Robert) wants citizens to maintain the peace in the country.

Also, speaking, Fahnbulleh Varney told this paper that there is no need of celebrating the Bicentennial because the country’s development is not satisfactory to the people of Liberia since 1847 to date.

According to him, though President Weah did not create the challenges and the failure Liberia currently faces, he said it is an age problem and, in light of the many challenges, the one-year bicentennial budget should be used on youth empowerment.

Thogar emphasized that corruption is on the rise every day, and that it is not the fault of the Weah’s administration, but of previous regimes such as former President Ellen Johnson Sirleaf’s and others.

As a result, he (Emmet Thogar) encourages Liberians to hold out hope that things will improve, but that it would take time, and he wants residents to think forward while making decisions on how to address Liberia’s challenges.

Madam Telma Dennis, a Mamba Point resident, told this reporter that the Bicentennial Celebration is both appropriate and timely.

Madam Dennis stated that Liberia’s 200th anniversary is a wonderful thing because the country has experienced many difficulties, underlining that now is the moment for Liberians to come together, unite, and forget their differences.

She urged her fellow Liberians to put the past behind them and concentrate on the next generation, who will be in control for the next 200 years.

“As the President stated, Liberians must let go of the past and embrace the present within the context of our differences in order to give birth to the future with unity, peace, reconciliation, and sustainable development as a top priority.

This is where Liberians should be concentrating their efforts right now, rather than fighting amongst themselves. “Let us put politics aside for a while and focus on the prosperity and development of our country,” she remarked.

Meanwhile, Madam Dennis used the occasion to encourage all Liberians to participate in the festivities, saying, “Liberia is a beautiful and blessed country, so let us join in the fight to make it great and peaceful for everyone. We have a great history to boast about, be proud of, and also learn from, especially the young ones coming up,” she added.

“We see this as a fruitless journey”Princess Cooper’s family angrily requests her...