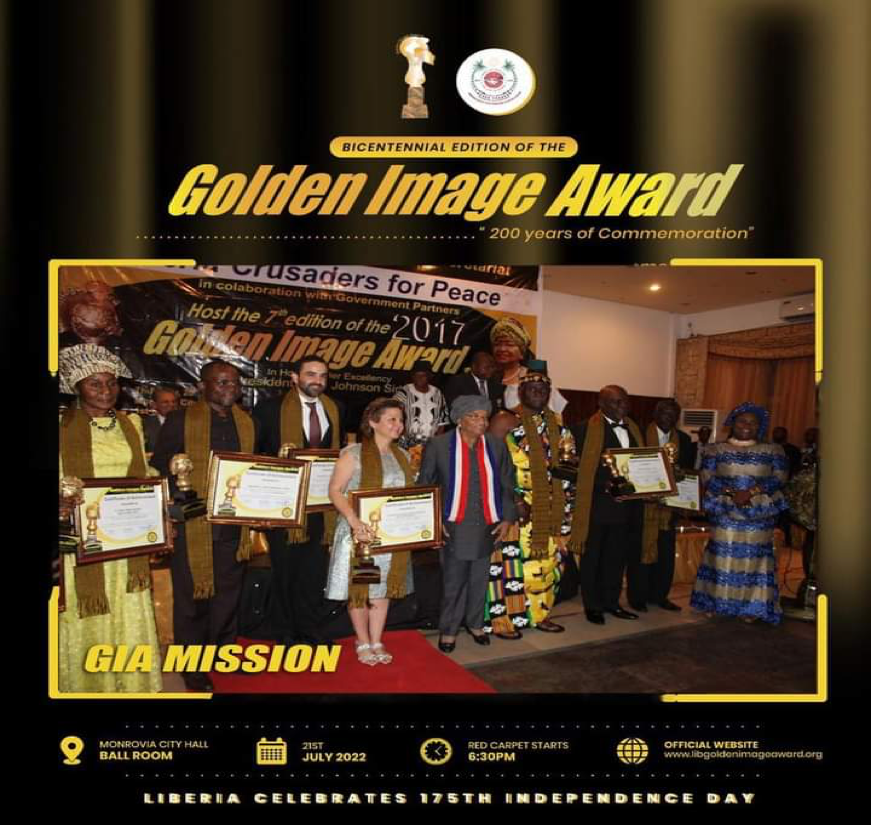 The prestigious Golden Image Award (GIA) ceremony for this year is scheduled for July 21, 2022, in Monrovia, Liberia. The July 21 event will begin the Independence Anniversary celebrations.

This year’s gathering, which is maybe the largest, brings together approximately 800 people. According to the event organizers, the event will be broadcast live in the Ball Room, VIP Lounge, and Theater at Monrovia City Hall.

According to Queen Juli Endee, the event’s keynote speaker would be Ambassador Michael McCarthy of the United States Embassy in Monrovia.

The GIA is an integral part of Liberia’s Independence Day celebrations, and it strives to maintain this tradition every year in the hopes of supporting national leadership through innovation to sustain the peace and inspire the Liberian people and the international community to collaborate with our government and increase investment in our economy.

The Golden Image Award (GIA) was established in September 2010, and the inaugural ceremony took place in July 2011. Since the end of Liberia’s 14-year civil war, the GIA provides a unique platform for Liberia to recognize and honor those individuals, organizations, and nations who have, against all odds, contributed their time and resources to development, investment, leadership, human rights, peace & security, arts & culture, health, advocacy, humanity, empowerment, democracy, and social justice for all in the world. The award is also designed to recognize and honor leaders and philanthropists who have helped Liberia achieve its current standing as a post-war success story among the world’s nations by empowering and investing in some form.

He is revered as a true legend, a foremost advocate for peace, and a goodwill ambassador for UNICEF. He is the best football player in Liberia, Africa, Europe, and the entire world. Ambassador Endee stated, “The only African to win the Ballon d’Or is Best Soccer, a 2011 Golden Image Award recipient.”

The Queen Juli Award recognizes private, public, or civil officials, leaders, political players, humanitarians, educators, investors, developers, advocates, activists, and peace actors who have made major contributions to the delivery of public services in Liberia and around the world.

She stated that it fosters volunteerism, humanitarianism, human rights, investment, development, leadership, empowerment, peace, and social justice in Liberia and around the globe.

The Award promotes artistic innovation and originality in Liberia, Africa, and the world by showcasing the abilities of Liberian artists and collaborating with international artists with larger platforms, such as musicians, movie stars, dramatists, craftspeople, dancers, and drummers.

The prize encourages individuals to solve problems and challenges in their respective areas.

The Golden Image Award Platform offers a once-in-a-lifetime opportunity to those who have made sacrifices and contributed to the development of a peaceful future generation – leaders whose examples can be used to build and achieve positive legacies, promote and encourage healthy living, quality education, effective leadership, and democratic processes in Liberia and throughout the world.

Her Excellency Ellen Johnson-Sirleaf, the former president of the Republic of Liberia, is the inspiration behind the Golden Image Award (GIA), according to its organizers.

Madam Ellen Johnson-Sirleaf was Africa’s first democratically elected female head of state. She was vetted against six other women from around the world and won for her bold and fearless role in ensuring that women’s rights are honored on the continent of Africa and throughout the world.

Former President Ellen Johnson-Sirleaf is without a doubt a global icon, renowned as a pioneering advocate for gender equality, democracy, and the rule of law. Madam Sirleaf received the 2011 Nobel Peace Prize.

The Senate’s decision to reject Ms. Edwina Collins was based on...