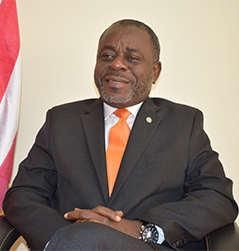 According to an Executive Mansion’s statement, Minister Nyenpan had been undergoing treatment in Accra, Ghana, following a stroke he suffered in early September. He died on Friday, October 30, 2020.

President Weah said, the deceased minister will be remembered for his humility, family values, love for country and strong work ethics, which resulted in the development of many rundown infrastructures in the country.

For his dedication and service to country, the Minister received a special plaudit from the President last year as a mark of encouragement.

The Executive Mansion statement added that his death has created a deep void in the cabinet; but will also personally impact the Liberian Leader who had come to regard the Minister as a friend and brother.

The President extends his profound sympathy to the family of the bereaved, praying that they take solace in the Lord during this trying time for them.

“Liberia’s Youths Are Dear to My Heart”