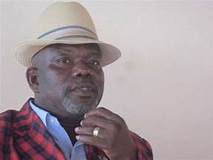 The political leader of the Movement for Democracy and Reconstruction (MDR) Prince Johnson has predicted that when the majority of Liberians, through the December 8, 2020 national referendum, vote for the reduction in the tenure of the Liberian presidency from six years to five years, President George Weah will serve for third term.

According  to the Nimba County Senator,  the Liberian leader  has served  three years now. He  indicated that voting for  such reduction of  the presidential term  mains all of those years  that President Weah  has served will be zero  and he will be given  the constitutional mandate   to go for  the third term.

“When the referendum passes , this current six years is a zero years for us ,after Weah gone for two more terms, that is the third term,” Senator Johnson indicated.

Senator Johnson, speaking to his congregation Sunday in Paynesville said history has shown that  there  is no incumbent Liberian leader who ever lost election.

Senator Prince Johnson who is collaborating with the Coalition for Democratic Change (CDC) led Government said Liberian politicians always have problem with him whenever he says the truth.

But following his statement  on Sunday, October 25,2020,  Senator Johnson clarified that the comments on the Weah third issue were his personal view  and not  the Movement for Democracy and Reconstruction (MDR), a political party that he heads as a standard bearer .

The Nimba County senator told the media that he will not contest for the Liberian Presidency in 2023 but he will support President George Weah’s reelection in line with their collaboration.

At the same, the Minister of State for Presidential Affairs, Nathaniel McGill refuted Senator Johnson’s statement. He indicated that President George Weah is not interested in third term.

According to Mr. McGill, President Weah is interested in reducing his term to 11 years Presidency contrary to Senator Johnson’s assertion

The Board of Commissioners of the NEC proclaims that the NEC will jointly conduct the special senatorial   election along with the referendum and the two Representative By-elections slated for December 8, 2020.

There are several provisions within   the Liberian Constitution that citizens are going to either vote for or against. The include   the reduction of the tenure   for the   presidency   , the tenure of senators and representatives, dual citizenship among others.   The Bomi  County lawmaker  and one of Liberia’s  Representative at the Economic   Community of West African States (ECOWAS) Parliament  said  the postponement  of  the referendum  will give  the citizens and other stakeholders   more time  to understand  those provisions and their intricacies.

According  to  him,  the constitution provisions  that focus  on the tenure of the president,  senators and representatives are critical components  that need to be looked at carefully for informed voting decisions by the citizens.

He said  with  the constitution referendum standing on its own, it will allow the  National Elections Commission  to conduct awareness   that will  inform  the  citizens  relating  to  the various provisions  and how   to vote .

Rep. Snowe further indicated that presently, the National Elections Commission is confronted with multiple challenges that include the cleaning of the voter roll update.

Rep. Snowe  also urged  authorities of the NEC and  the Supreme Court  of Liberia to do  those  things  that will gain  the public trust and confidence  during  these elections by ensuring  that  the country’s democracy  is sustained.

At the same the Minister of State for Presidential Affairs Nathaniel Mcgill refuted such statement indicating that president George Weah is not interested in third terms.

According to him president Weah is interested in reducing his tern to 11 years presidency contrary to Senator Johnson accusation.

“We didn’t manufacture the story”