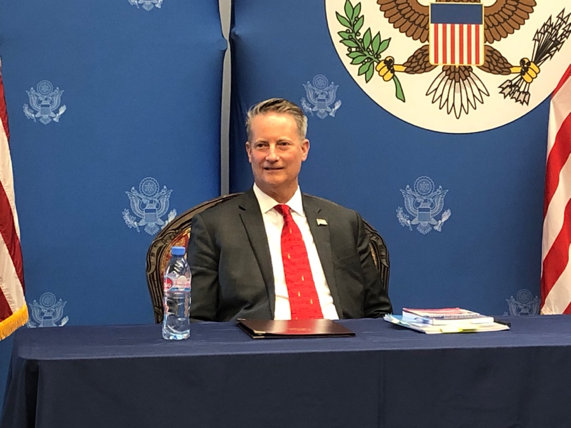 Ambassador Michael A. McCarthy: I strongly encourage legislators and members of civil society to hold the government accountable for any infractions that may occur. Without strong political support for their efforts, integrity institutions will not be successful in their missions. “Integrity institutions are essential to preventing corruption and ensuring good governance. The strength of a democracy is directly proportional to the robustness of its institutions, which serve as checks and balances. The leaders of Liberia should demonstrate their support for institutions that uphold integrity by putting their words into action and providing financial support.

It has come to light that integrity institutions in Liberia do not receive the full budget allotment that have been appropriated to them. As a result, these institutions are unable to fulfill the legal mandates that have been placed upon them to combat corruption.

On the basis of this new report, the United States Ambassador Michael A. McCarthy has issued a call to the legislative and executive branches of government, urging them to collaborate in order to guarantee that the budgets will be adhered to and that integrity institutions will receive the full budget appropriations for which they have been allocated.

Ambassador McCarthy has also expressed his hope that legislators are regularly meeting with the Ministry of Finance in order to ensure that appropriations from the national budget are being spent in a manner that is consistent with government expenditures.

These statements were made by Ambassador McCarthy after he had recently completed a tour of various integrity institutions in Liberia.

During his remarks at a press roundtable event that took place on Tuesday, December 6, 2022, at the United States Embassy in Monrovia, Ambassador McCarthy revealed that he had the pleasure of visiting and meeting with both the leaders and employees of several important institutions. These institutions included the Internal Audit Agency, the General Auditing Commission, the Financial Intelligence Agency, the Public Procurement and Concessions Commission, and the Liberia Extractive Industries Transparency Initiative.

According to him, the purpose of the meeting with those institutions was to assess whether or not they had seen improvements in accountable governance as a result of the sanctions that were announced in August 2022 by the United States Treasury Department.

In addition, Ambassador McCarthy stated that over the course of the past ten years, the leaders of Liberia have provided less political and financial support to the country’s vital integrity institutions, the economy has slowed, the level of corruption has increased, and international businesses have begun looking elsewhere for opportunities to invest.

He was of the opinion that these tendencies are connected, and that there is a direct correlation between the state of the economy and the functioning of the integrity institutions in Liberia.

He argued that well-functioning integrity institutions are a reflection of a country’s commitment to the rule of law. This gives investors, both domestic and foreign, the confidence they need to invest and keep their money in Liberia, which lays the foundation for the future prosperity of the country.

He stated, “Liberia’s economic potential is still enormous; however, this potential will not be realized without accountable democratic governance, which is what Liberia’s integrity institutions are meant to promote.”

Ambassador McCarthy insisted that integrity institutions were underfunded and under allocated, causing them to be less effective than they ought to be. As a result of significant reductions in operational funds, the integrity institutions do not have enough money to buy fuel for their vehicles or laptops to use for investigations and audits. The funding shortfalls amount to more than fifty percent of the amount that was allocated to them in the national budget.

In addition to this, he urged the legislature to increase the budgets of the aforementioned institutions and also to exercise the rightful fiscal oversight authority that is rightfully theirs by ensuring that the amount that was allocated to them is the same amount that they actually receive.

According to statements made by the U.S. Ambassador, in many instances, budgeted amounts are altered and allocations are decreased without prior input from the legislature for institutions that uphold integrity.

“I strongly encourage legislators and members of civil society to hold the government accountable for any infractions that may occur. Without strong political support for their efforts, integrity institutions will not be successful in their missions. “Integrity institutions are essential to preventing corruption and ensuring good governance. The strength of a democracy is directly proportional to the robustness of its institutions, which serve as checks and balances. The leaders of Liberia should demonstrate their support for institutions that uphold integrity by putting their words into action and providing financial support “he said.

In conclusion, the United States Ambassador expressed dissatisfaction with the state of the investment climate in Liberia. He stated that Liberia is known as a market in which well-connected borrowers do not pay back their loans, whereas micro-finance borrowers of much more modest means have a commendable pay-back rate. This was in response to the fact that Liberia has a reputation today as a market where well-connected borrowers do not pay back their loans. Therefore, more affluent consumers are to blame for the negative reputation that has been attached to Liberia.

In the meantime, Ambassador McCarthy extended his congratulations to the Government of Liberia on two recent accomplishments. These include the implementation of new policies at the Liberia Electricity Corporation (LEC), as well as the significant advancements made by the newly appointed managing director of the National Port Authority of Liberia.

He acknowledged the efforts that were being made by the LEC to regularize accounts and distribute transformers and meters, which brought a large number of customers into compliance. At the same time, he encouraged the LEC to continue making every effort to ensure that its financial sustainability would be ensured by eliminating the problem of electricity theft.

In addition to this, he highlights the significant achievements of the new managing director of the NPA, which include the reduction of ghost employees, the acceleration of the dredging project at the Freeport of Monrovia, the authorization of larger ships to enter the port, which helps to reduce the unit costs of imports, and the streamlining of operational procedures.