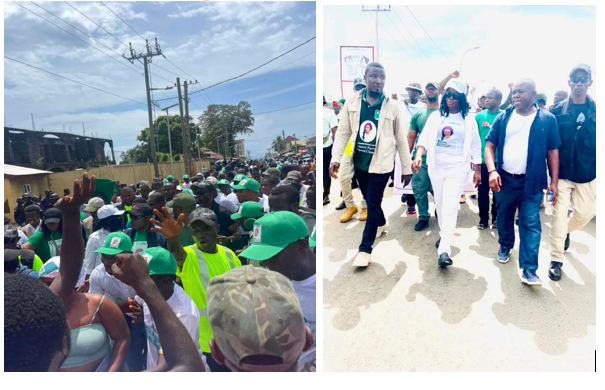 As Liberia gradually prepares for the general and presidential elections in 2023, prominent opposition lawmakers are starting to raise eyebrows over what they term to be the incompetence of the board of commissioners of the National Elections Commission (NEC). As a result, they are demanding that the board of commissioners of NEC resign immediately.

On Friday, October 28, 2022, Senator Nyonblee Karnga Lawrence, the Political Leader of the Liberty Party, led a peaceful protest calling for the resignation of the Commissioners of the National Elections Commission. The protest was led on the grounds that the Commissioner’s intention to serve as Chair of the Commission will be a bad moment for a free, fair, transparent, and credible election.

At the headquarters of the Commission in Sinkor, the secretary of the National Advisory Committee, Mr. Jacob Smith, stated that the integrity of the NEC is being questioned due to corrupt practices, conflicts of interest, and interference with the affairs of political parties. This statement was made while Mr. Smith was presenting the position statement of the Party. As a consequence of this, the NEC’s current leadership cannot be trusted to oversee the elections in 2023.

The Liberty Party, in reference to its internal conflict, which should be addressed by the NEC, stated that the board of commissioners became parties to the conflict and encouraged the implementation of an amended constitution. This statement was made in reference to the fact that the NEC should address the situation.

The Libertarian Party asserted that the National Election Commission had relegated its non-partisan role to that of a partisan institution by engaging in multiple activities designed to exacerbate the conflict within the party.

Even though the Supreme Court had ordered that, in accordance with what was stipulated in the Farmington MOU, both parties were required to recall and correct the amended constitution. Since it was presented to the NEC on July 11, 2022, Mr. Jacob Smith, the Commission, has deliberately refused to accept the corrected version. This is something that they believe gave Mr. Billy the gusto to act inappropriately.

After the conflict, the Liberty Party claimed that the NEC had shown a conflict of interest, specifically when she turned to Mr. Bility to secure a bond for her during her corruption case with the government of Liberia while the party’s case was still ongoing. The Liberty Party said this occurred while the party’s case was still being investigated.

“Mr. Bility was the one who accompanied the indicted NEC Boss each and every time she needed to appear in court. How on earth could an organization that prides itself on its seriousness behave in such an unprofessional manner?, “the party wonders.

The National Elections Commission (NEC) currently plays a role in both the internal conflict within the party as well as other national issues. The Liberty Party is of the opinion that Liberia could be headed for trouble if the NEC continues to function in its current capacity to conduct the general elections in 2023.

As a result, the Party suggested that the Commission approve the amended version of the LP constitution, and it also requested that the international community monitor the general and presidential elections in 2023.

They emphasized the necessity for the international community to assist Liberia with international IT experts to jointly operate the data section in conjunction with the NEC data team, in order to prevent fraud, which they believe was associated with the process of voter registration in 2017.

They continue by recommending “That the biometric voter registration be procured by Liberia’s international partners, specifically the UNDP, and ensure that the software remains clear for fair play for all.”

In addition, the Liberty Party has requested that ECOWAS and the United Nations both send a technical electoral team to Liberia to investigate the current state of affairs at the NEC in order to ascertain whether or not the commission is prepared to administer the general elections scheduled for 2023.

In response to the concerns raised by the LP, the National Elections Commission gave its word that the complaints would be investigated in the days to come in accordance with the mandate that was given to it.

The Commission wishes to restate that all stakeholders and parties will be mindful in relation to Chapter Two “consistent with these assurances.”

Recently, there has been a string of unusual issues that range from questions about the leadership at the National Elections Commissions to worries about internal conflict within the Liberty Party. These questions and concerns cover a wide range of topics.

Over the course of the past year and a half, the controversial Political Leader of the LP and the National Chairman of the Party have been engaged in a never-ending struggle for supremacy within the party. It has also been demonstrated that the ownership conundrum faced by the Labor Party had an indirect impact on the demise of the Collaborating Political Parties (CPP).

Despite the fact that Senator Lawrence, in her capacity as the Party’s Political Leader, quickly nullified the Party’s convention that was scheduled to take place on January 21st–23rd, 2021 after she was suspended, both the Senator’s faction and the 2018 Constitution continue to be toothless due to the fact that the NEC has repeatedly denied them legal authority.

The fact that the party is currently divided into two distinct factions makes it appear as though the struggle for legitimate ownership will never end. Neither the Nyonblee nor the Bility fraction appears to be prepared for an understandable dialogue in the interest of ensuring that the fractured party is brought back together.

On December 6, 2021, Bility made the announcement that it would be suspending the Political Leader of the party, Nyonblee Karnga Lawrence, along with other executive members due to allegations that they were unable to make their required payments on time.

As stated in the communication that led to their suspension, suspended executive members were given a period of ninety days to settle their financial obligations or face the possibility of being expelled from their positions within the party.

As a consequence of that, as well as the fact that they did not adhere to the suspension deadline, Mr. Bility appeared rational, leaving no room for errors as he unhesitatingly filled in the vacancy that was created as a result of the suspension of Senator Dillon and other officials of the Party. He did not hesitate.