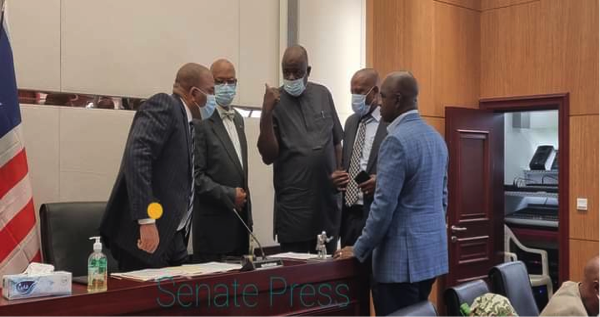 The Liberian Senate’s Plenary has decided that its leadership will handle a correspondence from a group calling itself “Concern Citizens and Registered Voters of Lofa County,” which is requesting the Senate’s permission to declare the Senatorial seat of Lofa vacant.

Plenary’s decision came in response to a move by Grand Cape Mount County Senator Simeon B. Taylor, who urged that leadership seize control of the citizen’s petition owing to the crucial nature of the situation.

Concern Citizens and Registered Voters of Lofa County acknowledged in their petition that, based on the recent opinion of the Supreme Court of Liberia, Brownie J. Samukai, the declared winner of the Lofa County Special Senatorial election, the said Court has effectively rendered the winner incapable and disabled to occupy said seat for and on behalf of the county.

According to a statement from the Senate, the concerned citizens also stated that since Senator-elect Samukai was convicted and sentenced to two years in prison by the Liberian Supreme Court, they (petitioners) will greatly appreciate the Senate’s decision to not only declare the county seat vacant, but also to inform the National Elections Commission (NEC) of the vacancy so that it can be filled in accordance with the law and with terms and conditions.

The Supreme Court of Liberia on January 27, 2022, ordered the incarceration of Senator-elect Samukai and co-defendants for two years for their failure to comply with the mandate of the court by paying 50% of the judgment sum in the amount of $537, 828, 15 within the period of six months.

The former Minister of Defense was prevented from taking his seat as Lofa County’s Senator after the Supreme Court of Liberia halted the National Election Commission (NEC) not certificate.

Essentially, Samukai, Joseph Johnson, and James Nyuman Ndokor have to serve two years of imprisonment each and pay the full judgment amount of US $1,147,656.35.

The former Defense Ministry officials were indicted and found guilty by a lower court for theft of property, criminal conspiracy, misuse of public money, and money laundering.