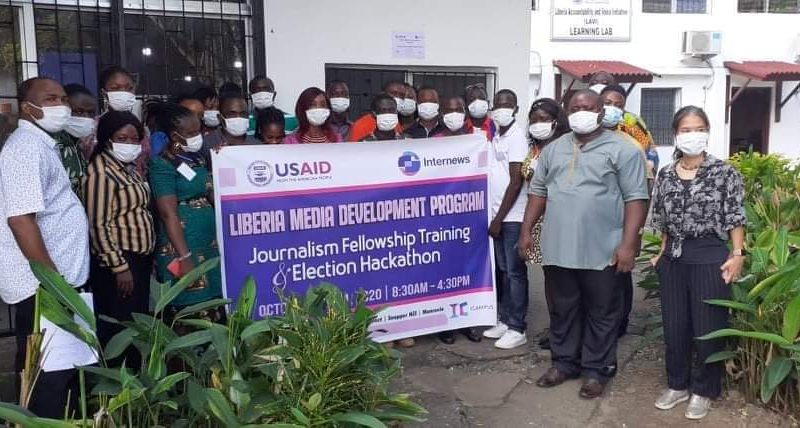 As the Special Senatorial Election (SSE) approaches, over twenty journalists from both print and electronic media institutions across the country are undergoing a weeklong training on election reporting and ‘Hackathon’, held at the Stella Maris Polytechnic on the Capitol Bye-pass in Monrovia.

The training has been organized by Liberia Media Development Program (LMD), Internews with support from USAID.

The training is intended to strengthen media’s capacity and empower journalists to effectively monitor the December 8, 2020, Special Senatorial Elections and National Referendum and to produce facts-based, objective reports that resonate with the electorate to promote free and fair election.

The training is also aimed at improving journalists’ political and electoral literacy in Liberian context while promoting the ‘4P concept’ which includes “People, Processes, Parties and Places” and to teach specialized skills to promote conflict-sensitive reporting.

Speaking at the official opening of the training session in Monrovia, the Internews Chief of Party (COP), Lien Bach, disclosed that the upcoming SSE and Referendum are very crucial to Liberia’s democracy.

Madam Bach urged participants to take the training serious so that at the end of the day, they will practice what was achieved in the performance of their reportorial duties.

She also emphasized that journalists should always produce good articles about the election in order to promote election in Liberia.

Also speaking at the ceremony, the Deputy Chief of Party, and Senior Media Advisor, Jefferson Massah, urged journalists to put their effort and time into the project.

He stressed that they expect greater participation.

Mr. Massah further asserted that over 40 journalists applied for the fellowship, but a little over 20 applicants were selected to be election fellows.

The first and second day of the training brought together  panelists from various professional back grounds.

Internews is an international non-profit organization. It aims to empower journalists worldwide to produce trustworthy, high-quality news products to support informed decisions, enabled people to participate in their communities, and hold power to account.

“At no point in time were we ever investigated”, Deputy Commissioners,...