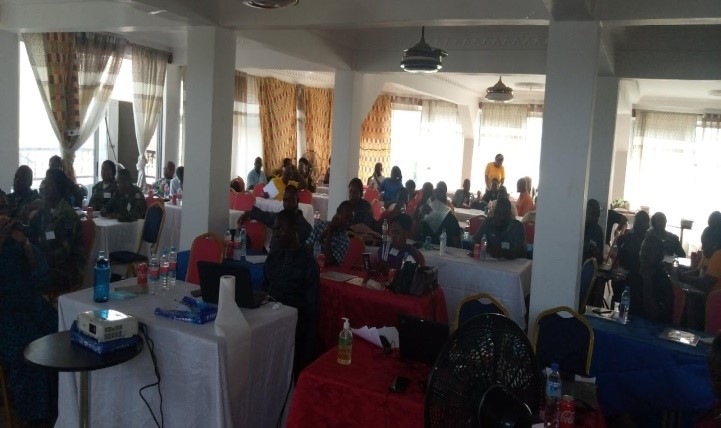 In order to build a vibrant security sector and to improve the idea of Gender- mainstreaming, the European Union and UN Spotlight Initiative sponsored a three-day Gender-mainstreaming workshop in Monrovia recently.

The forum was also centered on enhancing gender- sensitive HRM Policies, and Procedures and the implementation of Justice & Security Sector -wide – Gender mainstreaming strategy with a view to ensuring greater gender- sensitivity and protection services.

The validation workshop was conducted from October 27 – 30, 2020, under the EU Spotlight Initiative Projects. It also focused on gaps identified in the assessment training, capacity building of Justice and Security Institutions.

Giving an overview of the workshop, Susan  B. Koker, an International Consultant for Gender- Mainstreaming Strategy Capacity Building, said  the workshop intent was also to improve capacity gaps as regard response to issues relating to Sexual and Gender-Based Violence and how to prevent them.

Madam Koker who also facilitated the training, said it makes security personnel to have the required knowledge and skills and approaches relating to SGBV and related matters.

” This focuses on improving capacity in terms of Knowledge, logistics, skills, equipment and infrastructures, which are some of the challenges in the fight against SGBV,” she said.

Another facilitator of the training, Florence Geegbae Dukuly, calls for collective fight to end SGBV.

She said it is frightening to see women and girls raped or sexually abused, a situation which is terrible and must be stopped.

She therefore expressed hope that the knowledge provided at the workshop will enable security personnel to understanding gender-mainstreaming aimed at boost the fight against SGBV in the country.

Madam Dukuly also said there must be adequate Knowledge and logistical support in order to strengthen to security apparatuses in handling such circumstances as SGBV and domestic violence.

“The Justice and Security personnel, need adequate Knowledge, required logistical support that will enhance their skills  and ability in performing their  duties,” she said.

Also speaking at the forum, a member of the Gender -Response Unit on SGBV at the Ministry of Justice, Oneta Robert , also  of Women Let’s Talk, commanded the EU Spotlight Initiative for its continuous support towards tackling the issues of SGBV in the country.

She said SGBV is seriously hampering the Liberian society.

” More of these awareness and training programs of this kind need to done to help stop our girls from the rape and abuse,” she said.

Meanwhile, the three day workshop brought together several security personnel, including officers of the Liberia National Police (LNP), Bureau of Corrections BCR); the Liberia Drugs Enforcement Agency (LDEA); the Liberia Immigration Service (LIS); and the Armed Forces of Liberia (AFL), among others .

It also was organized as another step aimed at preventing gender-based violence against women and girls, a core value of the partners.

The workshop forms part of the European Union in Liberia funded globalspotlight Initiative. This joint project is being implemented by the One UN in Liberia through agencies like UN Women Liberia, UNIICEF Liberia, UNFPA Liberia, and UNDP Liberia.