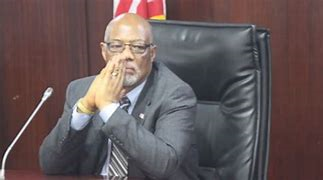 The United States Government has joined Liberia and Africa at large in the fight of corruption.

Recently, the U.S Government also sanctioned the former Passport Director, Mathew Nyeplo for corrupt act carried on at the Passport Division at the Ministry of Finance.

Cllr. Harry Varney Gboto-Nambi Sherman has also been caught in the web for corrupt practices.

The U.S Government on Tuesday, in a statement sanctions Cllr. Sherman for his involvement in the USD 950,000 bribery scheme.

The indictment stated that the officials while serving in various capacities in government received bribes in the amount of US$ 950,000 from a British Company Sable Mining to change some provisions of the Public Procurement and Concession Commission (PPCC) Act in favor of the company to mine the Wologisi Mountain in Lofa County.

According to the statement from the U.S. Department of the Treasury Cllr. Sherman offered bribes to multiple judges associated with his trial for a 2010 bribery scheme, and he had an undisclosed conflict of interest with the judge who ultimately returned a not guilty verdict in July 2019.

The statement further that Cllr. Sherman has routinely paid judges to decide cases in his favor, and he has allegedly facilitated payments to Liberian politicians to support impeachment of a judge who has ruled against him.

The U.S Government continued that in the 2010 scheme that led to this trial, Sherman was hired by a British mining company in an effort to obtain one of Liberia’s last remaining mining assets, the Wologizi iron ore concession. Sherman advised the company that, in order to obtain the contract, they first had to get Liberia’s procurement and concessions law changed by bribing senior officials.

Accordingly, the statement maintained that in 2019, the presiding judge acquitted all individuals accused of being involved in the bribery scheme. Sherman’s acts of bribery demonstrate a larger pattern of behavior to exercise influence over the Liberian judiciary and the Ministry of Justice.

‘’Sherman is designated for being a foreign person who is a current or former government official responsible for or complicit in, or directly or indirectly engaged in, corruption, including the misappropriation of state assets, the expropriation of private assets for personal gain, corruption related to government contracts or the extraction of natural resources, or bribery,’’ the U.S Government stated.

Meanwhile, the document stated that ‘’today, on International Anti-Corruption Day, the U.S. Department of the Treasury’s Office of Foreign Assets Control (OFAC) is targeting corrupt actors and their networks across several countries in Africa and Asia. Today’s actions are taken pursuant to Executive Order (E.O.) 13818, which builds upon and implements the Global Magnitsky Human Rights Accountability Act, and targets perpetrators of corruption and serious human rights abuse. On International Anti-Corruption Day, Treasury remains fully committed to imposing costs on those who facilitate corruption at the expense of the people,” said Deputy Secretary Justin G. Muzinich.

Accordingly to raise public awareness for anti-corruption initiatives, International Anti-Corruption Day has been observed annually on December 9 since the United Nations General Assembly adopted the United Nations Convention against Corruption (UNCAC) on October 31, 2003. There are currently 187 States parties to the UNCAC. In addition to sending a message against corrupt behavior, Treasury uses its tools to increase transparency, accountability, and the rule of law. With these designations, Treasury encourages all governments to implement anti-money laundering reforms to address corruption vulnerabilities.