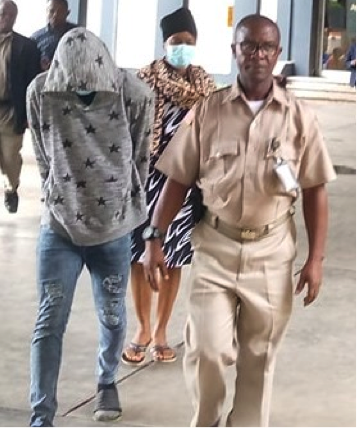 MONROVIA – Police authorities announced Tuesday that the Liberia National Police (LNP) has charged and sent to court juvenile suspect Jovanus Oliver Turay, being held for the shooting to death of 14-year-old Precious Ireland on the campus of the Cyber-Ed Christian School of Excellence last month.

The LNP says it has also charged and sent to court the mother of Jovanus, Madam Josia Ma Watta, in connection to the tragic shooting incident.

It can be recalled that during the early morning hours of Tuesday, 13 April 2021, Precious Ireland met her tragic death in what police authority confirmed as being as a result of gunshot wound sustained when a 9millimeter pistol allegedly being carried by prime suspect Jovanus Oliver Turay went off on the campus of the Cyber-Ed Christian School of Excellence located at the Sophie Community, Oldest Congo Town.

At the time, police announced that two 11th Grade students of the Cyber-Ed Christian School of Excellence, Jovanus Oliver Turay, 16-year-old and 17-year-old Matthew Gonkerwon, a person of interest, were arrested and undergoing police investigation in connection to the death of Ireland.

Howbeit, police spokesman Moses Carter told reporters Tuesday that the LNP has investigated and charged juvenile suspect Jovanus Turay with the crime of negligent homicide, for recklessly and negligently discharging a firearm that resulted to taking away of the life of a 14-year-old Liberian citizen, Precious Ireland formerly of the Cyber-Ed Christian School of Excellence.

Carter narrated that during police in-depth investigation conducted, it was revealed that suspect Jovanus Turay secretly encountered a Taurus G2C 9mm pistol with live rounds from [under] his mother’s bed, which he took on campus.

The police spokesman disclosed that suspect Jovanus’ mother, who he referred to as an accomplice has been charged with recklessly endangering another person, and for illegal possession and sale of objects for lethal use, in violation of Chapter 14 Section 14.23 and Chapter 17 Section 17.11 respectively and sent to court for prosecution.

Carter said both Jovanus and his mom have been forwarded to court, and will be made to face the full weight of the law, saying, “we can assure the citizens of this country that [the] law will take its course in this process – all we ask the citizens of our country is to allow the rule of law to thrive.”