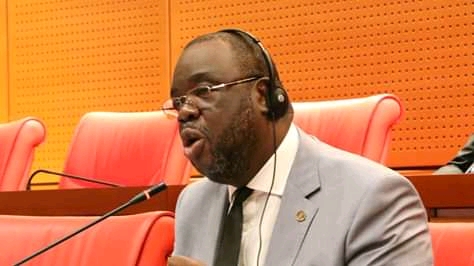 Bomi County Bomi County District #1 lawmaker in the House of Representatives, Rep Edwin Snowe and his longtime friend President George Weah seem not to be in one accord regarding the ensuing Constitutional Referendum slated for 8 December.

Speaking recently on a local radio station, Representative Snowe recalled that as a member of the ruling Unity Party in 2014 , during the special senatorial election, he supported President Weah senatorial bid for the Congress for Democratic Change against his party’s candidate.

He did not elaborate if President Weah will reciprocate such support to his senatorial bid of which the Liberian leader is yet to make such pronouncement, something political pundits believed has attributed to the political divorce between the pair.

The Bomi County lawmaker who is an independent senatorial candidate vowed recently to vehemently campaign for no for propositions of the referendu, whereas President Weah and his administration seeking an affirmative vote for exercise .

Additionally the former Speaker of the House of Representatives recently called on the Liberian government through the National Elections Commission and the Supreme Court to postpone the conduct of the national referendum, contrary to President Weah call that in support of the holding of the referendum.

“There are several provisions with in the Liberian Constitution that citizens are going to either vote for or against, you have the reduction of the tenure for the presidency , the senators and representatives including the dual citizenship “ Snowe said .

But addressing a news conference Monday the Minister of State for Presidential Affairs Nathaniel McGill said president Weah is in support of the conduct of the referendum on December 8.

According to him the pending referendum is for the people of Liberia, urging opposition politicians, who he describes as greedy politician not to politicize the referendum.

Minister McGill used the occasion to call on those in the opposition community and partisans and supporters of the ruling party as well as the general public to collectively join the campaign to say yes to all counts of the referendum prepositions.

He indicated that all of the propositions are in the best interest of the Liberian people and the economic growth of the country.

The chief of staff of the President’s office said the Liberian president endorses the conduct of the referendum in an affirmative manner because he has the country and its citizens at heart.

“To be a sitting President and call for the reduction of your tenure, this speaks volume about the love and nationalism as well as patriotism the Liberian leader has for his people” he pointed out.

The former chairman of the ruling CDC said only greedy politicians will campaign against the propositions when a sitting president is willing to reduce his tenure, emphasizing that he is of the conviction that they will all join the what he calls the yes campaign.

Minister McGill further disclosed that President Weah will only serve his two terms as guaranteed by the Constitution, saying, “he will not seek a third term in office”.

He narrated that the Court has ordered the National Elections Commission to go ahead with the printing of the ballot papers, noting that it must be done on separate papers in line with the country’s Constitution.