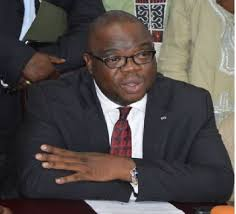 One of Liberia’s representatives at the ECOWAS Parliament, Bomi County District #1 lawmaker Rep Edwin Melvin Snowe, Jr. wants the Government of Liberia dialogue with impeached Supreme Court Associate Justice Cllr. Kabineh Ja’neh over the recent ruling of the ECOWAS Court in favor of Ja’neh against the GoL.

Recently, the Abuja based ECOWAS Court of Justice, ordered the GoL to among others, reinstate impeached Justice Ja’neh, and pay him the sum of US$200,000 (two hundred thousand United States Dollars) as reparation for what the Court calls moral prejudice Ja’neh suffered for the violation of his rights.

Cllr. Ja’neh, it can be recalled, was impeached in 2019 under dubious circumstances, with two lawmakers of the ruling Coalition for Democratic Change (CDC), Montserrado Representatives Acarous Gray and Thomas Fallah jointly sponsoring a bill for Ja’neh’s impeachment.

Ja’neh at the time contended that the processes leading to his impeachment proceedings and subsequent removal violated his human rights, particularly the right to fair hearing and impartial trial, right to work and dignity of person guaranteed by the African Charter on Human and Peoples rights, the Universal Declaration of Human Rights.

At the time, Ja’neh argued that his purported impeachment, trial, conviction, removal from office and replacement violated the Constitution of Liberia, with many Liberians at then siding with the impeached Associate Justice, indicating that his impeachment process was “politically motivated.”

Howbeit, the ECOWAS Court recently ruled in favor of impeached Associate Justice Ja’neh, and gave the GoL a six-month ultimatum to report on the enforcement of the judgment.

Among others, the ECOWAS Court in its 73-page ruling ordered the Government of Liberia to restore, calculate and pay to Ja’neh all his withheld entitlements, including salaries, allowances and pension benefits as from the date of his impeachment to the date of notification of the Court’s judgment.

Women Voices Newspaper (WVN) quoting impeccable governmental sources reported recently that the George Weah-led government is contemplating to deliberately flout the order of the Court, something which would land her into trouble, most probably sanction from the regional body.

Legal luminaries told WVN that if the assertions of our sources are anything to go by regarding the GoL’s intended willful flouting of the ECOWAS Court’s recent order, the Court will this time seek for the sanction regime against Liberia, adding that then this will bring to two the number of times the Liberian government would have disobeyed the orders of the Court, the first being the case with former Liberian First Lady Mrs. Nancy B. Doe.

Now, Rep Snowe is calling on the Government to do the right by dialoguing with the aggrieved impeached Associate Justice and save Liberia from the wrath of ECOWAS, which mostly possibly would be the imposition on the nation with an already terrible economy.

Appearing on a local radio Monday, Rep Snowe said if Government refuses to dialogue with Ja’neh, the country risks sanction from the regional body.

He disclosed that Liberia is a signatory to the statute of the ECOOWAS Court of Justice, adding, “Let’s make no mistake, Liberia is a signatory to the statute that created ECOOWAS Court of Justice. So Liberia has subjected herself to the jurisdiction of the Court. You will not be a member of an organization and when there is something against you, than you say I cannot respect the decision but if it is in your favor than you respect the decision.”

The former Liberian House Speaker intimated that the ECOWAS Court of Justice has reached a decision concerning the impeached Associate Justice Ja’neh and that needs to be respected by the Liberian government.

According to him, there are two counts of the court decision that include reinstatement or retirement, adding that the ECOOWAS Court is in the know that Cllr. Ja’neh was appointed by the President of Liberia and was impeached by the Legislature.

The Bomi County Representative noted that that President Weah has already replaced Cllr. Ja’neh on the Supreme Court Bench.

Howbeit, the ECOWAS Parliament official further noted that the ECOOWAS Court has given the Government of Liberia option either to reinstate Cllr. Ja’neh or pay him all of his benefits, something he said the GoL is unwilling to do.

The Bomi County lawmaker further said the way forward in such situation is for government to dialogue with impeached Associate Justice Ja’neh.

Representative Snowe disclosed that President Weah as a member of the Authority of Head of States of ECOWAS and a former member of the ECOWAS Parliament understands the workings of that body.

He refuted allegations from Liberians who are of the opinion that if the GoL refuses to comply with the Court’s ruling nothing will affect the country.

The Liberian representative to the ECOWAS Parliament further said if the GoL refuses to honor the Court’s ruling, the county risks not only economic sanction but also runs the risks of being denied positions it presently occupies within the regional body and other benefits.

The ECOWAS parliamentarian said the best way forward in such situation, to serve for the good of the country, is through dialogue and not for the GoL to put up a challenging posture against the Court’s recent ruling in favor of Ja’neh.