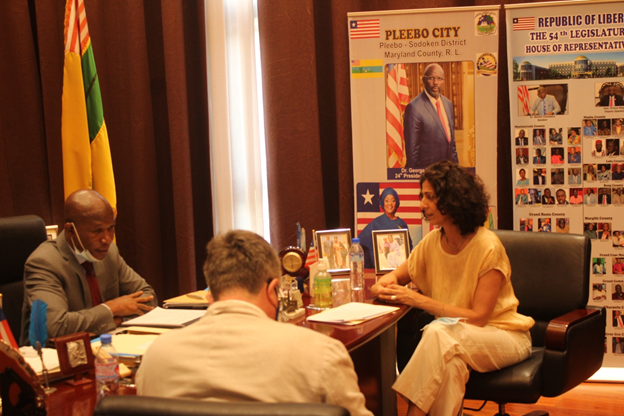 House Speaker, Dr. Bhofal Chambers has told the European Union delegation to Liberia that democracy cannot be divorced from the economy, as it is the catalyst for human determinacies for good electoral decision-making.

Speaking recently at his Capitol Building office in Monrovia when a special delegation of the European Union visited his office, Dr. Chambers says  he is cognizant of the level of works being done by the European body in Liberia, mostly in infrastructure, health, education, rule of law, elections, and their efforts to buttress more women’s participation in public service.

The Speaker also mentioned other areas of intervention the European Union has made in the Country, but intoned that the 2023 elections remain a herculean task for Liberia, and it is his wish that partners like the EU begin works with the National Election Commission to mitigate the challenges ahead as the Weah-led administration has given its commitment to a successful election in 2023.

Speaking on behalf of the EU’s delegation, Ms. Maria Arena, member of the European Parliament and Head of the European Observation Mission during Liberia’s 2017 general elections expressed her optimism that Liberia is on a record trajectory for democracy in the sub-region.

Ms. Arena however, disclosed that the European Union delegation in Liberia has submitted a 23-recommendation [document] to stakeholders in the country, containing 6-priorities on which she says the EU looks forward to strengthening its cooperation with Liberia.

The EU envoy also registered the concern of her delegation about the multitude of candidates’ legal contention from the just-ended senatorial elections.

Madam Arena also divulged that as part of the EU’s recommendation to Liberia, they proposed the issue of reform in the electoral dynamics of the country, as a mean of having sustainable solutions to some of the country’s electoral matters.

Nimba: Residents of Gbor-Dehvon Town Cry Out for the Renovation of...