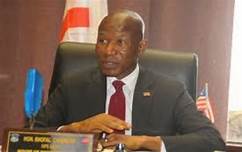 MONROVIA – House Speaker, Dr. Bhofal Chambers has extolled Liberians for peacefully participating in the country’s just-ended special elections, indicating that the outcome of the elections reflect the will of Liberians.

Speaker Champers in a statement issued in Monrovia says his felicitations also goes to sitting members of the 54th Legislature who saw faith in the democratic credentials of the country and threw their political interests in for participation.

The Speaker says he believes that the outcome of the democratic process reflects the will of the Liberian people and has called on all participants to see themselves as champions of democracy.

He says, now that the elections are over, he remains cognizant about the impact the process has made on the 54th Legislature, signaling the House of Representatives, which recorded several of its members throwing expressing interest in the Senate.

He then congratulated all sitting Representatives of the Legislature who won senatorial seats in their respective counties, and has at the same time commended those who did not get their people’s mandate, for their participation.

Speaker Chambers, referencing the National Elections Commission’s announcement about the electoral victory of the Deputy Speaker of the House of Representatives Prince Moye of Bong County, congratulated the Senator-elect, saying, Moye’s electoral win to the Liberian Senate will trigger an election to fill the Deputy Speaker’s post through an election amongst colleague members of the House of Representatives in line with the House’s rules.

Meanwhile, House Speaker Chambers is in his native Pleebo Sodoken District, Maryland County, where he participated in the electoral process in that part of the country campaigning openly for his party’s candidate Mr. James P. Biney of the ruling Coalition for Democratic Change (CDC). Mr. Biney has since been announced by the National Elections Commission as the winner of the race in Maryland County.

Last week in Pleebo City at a Townhall meeting with his constituents, Speaker Chambers announced an additional Two Million Liberian Dollars (LRD 2,000,000) in scholarship grants and made available more than fifteen hand pumps water machines to Pleebo Sodoken District for use by residents.

The Maryland County lawmaker has been holding several Townhall meetings across his district, solving some of the needs of his constituents, several of which are personal and categorized conditions.

According to the statement, Speaker Chambers has also announced during one of his Townhall gatherings, the amount of three hundred thousand Liberian Dollars (LRD 300,000) for youth empowerment.