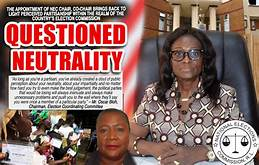 The NEC ‘s statement came after they have on October 10, and the 16 of this year made press statements, ordering aspirants that are bridging the Supreme Court of Liberia’s ‘stay order’ which came as a result of a complaint which was filed by aspirant Mulbah Jackollie of Margibi County of his name not being placed on the candidate listing  at such, an ‘alternative writ of mandamus’ was placed on the December 8, 2020 elections by the court, halting all campaign activities across the country.

But, despite the recent ‘writ of preemptory’ which was placed on the upcoming elections on October officially ‘compelling all campaign activities to stop’, there have been an increment in campaign activities across the country by both aspirants and incumbents who are vying for the senatorial seats.

But, the NEC has again indicated that campaign activities are still on hold, adding that those who are campaigning are violating the high court’s order and should stop doing so.

‘Those who are campaigning against the court’s mandate are violating the law, and should stop because campaign is not yet open officially’, the NEC cautioned violators.

The NEC PRO who said that the NEC has not received any formal complaint from anyone who feels aggrieved of any discrepancy they think must have been carried out by the NEC said, if there should be anything of such, violence should not be a means for their disenchantments, but the matter should instead be taken to the court for redress.

“I am Constrained to resign”

“At no point in time were we ever investigated”, Deputy Commissioners,...